By Chris Morris
2 Comments
It is not exactly a pub without beer, but it amounts to the same thing.

The Careys Bay Hotel was yesterday forced to close its doors for the fourth time in a year, after an old Dunedin City Council water main supplying drinking water to the area failed - yet again.

Careys Bay Hotel owner Jo Kidston said it was about the 20th time in recent years the old asbestos pipe - which dated to the 1960s - had blown.

Each time, repairs required the entire area's water supply to be cut off, affecting not just the hotel but also surrounding residents in Careys Bay and Deborah Bay, she said. 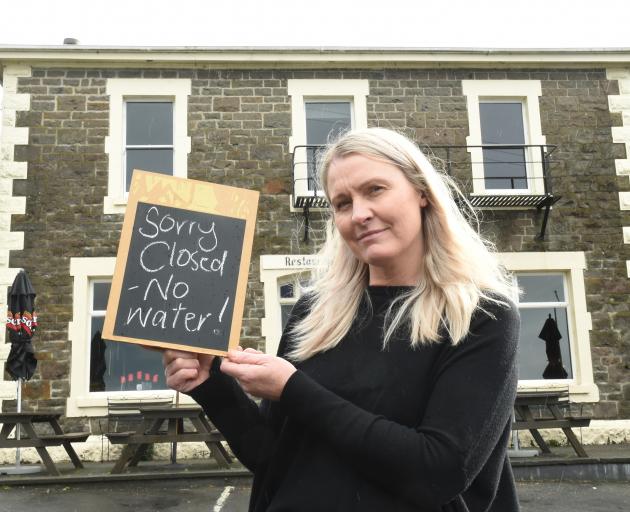 Careys Bay Hotel owner Jo Kidston was forced to close her doors yesterday - for the fourth time in a year - after a Dunedin City Council water main failed yet again. PHOTO: GREGOR RICHARDSON

Ms Kidston said the disruptions had been getting "worse and worse" and, despite a series of meetings with council staff, there was no end in sight.

Council staff had told her they lacked the budget to prioritise the replacement of the old pipe until at least 2025.

"They keep putting the rates up ... we're paying for the water we're not always getting."

The disruptions had so far cost the hotel up to $8000 in revenue and staff costs, as customers were turned away and staff sent home.

The supply was eventually restored by contractors yesterday afternoon, but she predicted the next fault would not be far away.

Council infrastructure services general manager Simon Drew said he had been in regular contact with Ms Kidston about the issue, which was exacerbated because the pipe concerned was the end of a long, solitary "spur".

Whereas a similar fault in the central city could be managed by isolating it and redirecting water, in Careys Bay there was only one main pipe, he said.

When it failed, water had to be cut to the entire area while repairs were carried out, which could take hours.

The council had been planning to replace the pipe as part of a wider upgrade in the area, also including ageing stormwater and wastewater infrastructure, which would cost "millions".

However, it was now reconsidering that and could bring forward the renewal of the troublesome water main to a "significantly earlier" date.

The project was among competing priorities the council was seeking to address as it tackled an $80million investment backlog across its $2.1billion water infrastructure network, sections of which were over 100 years old.

That included increasing its 2018-19 capital spending by $27.7million, including on water infrastructure, in efforts to double renewals outlay, Mr Drew said.

Sad, but the truth is the $300m white elephant has meant such infrastructure spending has been put down the priority list. There are more pressing needs; empty cycle lanes, mostly empty buses, destruction of carparks, a bridge to nowhere & more.....needs to be funded via our rates/fees, no water..Water is only a 'core' service. Vote them out!

"Council staff had told her they lacked the budget to prioritise the replacement of the old pipe until at least 2025".
Not building a 20mil bridge would go someway to fixing the pipes surely.