Deep beneath a South Dunedin sports field, scientists hope to find the answers to the area's geological history and discover clues to its future.

A joint drilling programme between the Otago Regional Council and GNS Science, which scientists hope will provide a better understanding of what sediment lies beneath coastal Dunedin, started yesterday. 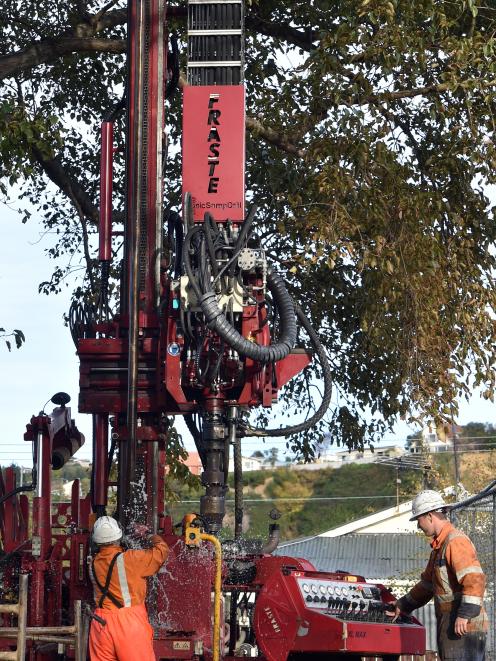 Peter Hopwood (left) and Jami Edgar, from McNeill Drilling, operate a deep soil drill at Tonga Park in South Dunedin yesterday as part of the Otago Regional Council's What Lies Beneath Dunedin project. Photo: Peter McIntosh
Drillers from McNeill Drilling will slowly make their way deeper into the sediment below Tonga Park using a sonic drill until they hit bedrock, which could be 70m below the surface.

Six more holes will be drilled around low-lying parts of South Dunedin and the coastal area near the city centre during the next three weeks.

Material collected will be analysed by scientists and groundwater measuring instruments will be installed in the drill-holes.

Using that information, a more detailed model of how climate change and sea level rise might affect low-lying parts of the city would be created, Dr Hornblow said.

''We're looking really, really closely at those core samples coming out of the ground and seeing are there bits of organic material or for evidence of an old estuary deposit or old beach deposit.''

''All sorts of things which can tell you what, basically, used to be here in the distant past.''

The programme is also part of the nationwide NZ Sea Rise project and is supported by the Dunedin City Council, University of Otago and Oceana Gold.

If you hit a midden, tell archaeology, as in Christchurch.