Blacks Hotel at Ophir, at the centre of a hoar frost in 2007. PHOTO: GERARD O’BRIEN
New Zealanders shivered through the year's coldest morning today, but few will have experienced the kind of crushing cold of the country's lowest recorded temperatures.

The McKenzie Basin dropped to -7C at Pukaki Airport near Twizel this morning. Dunedin got down to -4C and Auckland dipped to 5C at the airport and 1C in some inland areas.

But those temperatures might have been like a summer's morning to the inhabitants of Ranfurly in Central Otago who in mid-July 1903 truly suffered when the thermometer plunged to -25.6C, New Zealand's lowest recorded daily minimum.

There were cases of frostbite, bottles froze and burst at pubs, town water supplies were at risk - and copies of the Mount Ida Chronicle stuck together when they were being printed.

"... it was only by thawing them over the stove that the work could be gone on with at all," the Naseby paper told its readers on July 24, 1903.

It reported that on Friday, July 17, 1903, "the thermometer registered 4 deg below zero [Fahrenheit, -20C] at Naseby and Gimmerburn, while it went down as low as 14 deg below zero [-25.6] at Ranfurly. This is the most intense cold experienced in that district since it was settled.

"At Gimmerburn on Friday night the thermometer was 8 deg below zero [-22.2C]."

Many people were struck with frostbite to the ears, hands or toes.

"At the beginning of the week quite a number of men were going about with their head or their hands tied up."

"Three cases had to go to the hospital … None of the cases are as serous as that of George Scott, who was severely bitten at Serpentine several weeks ago. He had to have all the toes of both feet removed, and is still confined to bed."

"At Ranfurly, with the exception of spirits, nearly all the liquids in the bottles froze. Sometimes the bottles broke, and the glass falling down would leave the contents standing on the shelf in a solid block. We hear that Mr Morrison, of Ranfurly Hotel, lost a good deal this way."

The National Institute of Water and Atmospheric Research (Niwa) has said that in July 1903, Southland and Central Otago were extremely cold, with cold air trapped for days. The early 1900s in New Zealand was a period of extremely cold spells.

Central Otago residents recalled that the cold snap of 1995 froze livestock to the ground and hens to their perches.

"We would have to cart buckets of water to the toilet to be able to flush because all the pipes were frozen," said Jack Allen, of Ophir, 20km west of Ranfurly.

While the hardest frosts and heaviest snows are the preserve, mainly, of the South Island, even in the northern North Island snow has been recorded.

"Snow has been seen as far north as Mahurangi," newspapers all over New Zealand reported following a snowfall on August 25, 1883. The Māori inhabitants were said to be "greatly astonished". 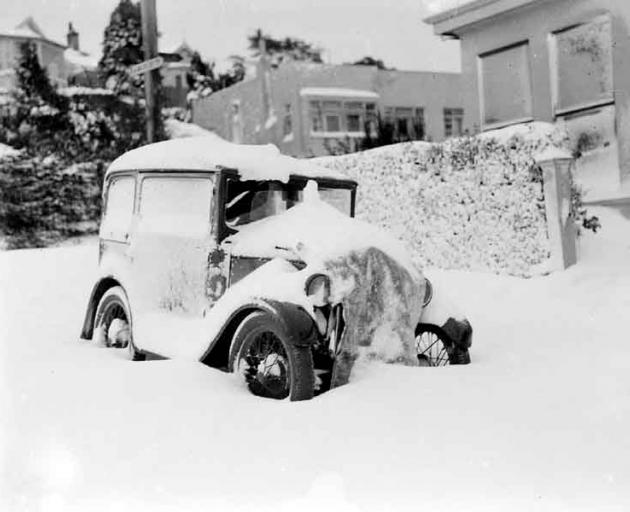 The Great Snow of 1939 in Dunedin. Photo from 'The Evening Star' archive.
On July 31, 1939, the lighthouse keeper at Cape Maria Van Diemen, about 6km south of Cape Reinga, reported a fall of snow, the first recorded there.

Snow had fallen in the preceding days at Ruapekapeka and had lasted on Kaikohe's hills for hours.

Aucklanders woke to white scenes on Thursday July 27, 1939 after an overnight snowfall.

"Snow on the hillsides near Auckland and sprinklings in the city and suburbs early yesterday morning were a climax to the current cold spell," the Herald wrote on the Friday.

"Early risers in the Waitakere Ranges saw memorable scenes. Snow lay on the ground to a depth of about two inches [5cm], and all the heights in sight, looking south and east, were white."

Drifts lay up to 10cm deep on the hills of Clevedon.

Worst affected in that storm were Banks Peninsula and Dunedin. The southern city was cut off for days, with snow a metre deep in Roslyn and Maori Hill. In Gore and Balclutha, drifts lay up to 6m deep.

Another big snow year was 1930, when, according to weather historian Erick Brenstrum, writing in New Zealand Geographic, bad weather followed a Lions rugby tour around the country and "snowflakes were seen in Onehunga and Karangahape Rd on July 28".

Before I left NZ in 1968 there were still people living in the Nevis valley and I was told a temp of -25C was recorded about that time. The geographic location and the narrow exit of the Nevis river would surely indicate the Nevis valley is probably the country's coldest place.