By Jono Edwards and Mark Price
2 Comments
The Northlake Kiwibuild deal was not "in the best interest of first home buyers", Prime Minister Jacinda Ardern says. 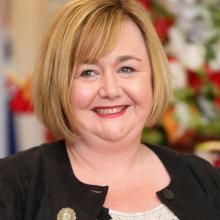 Megan Woods
Housing Minister Megan Woods announced on Wednesday a "reset" of KiwiBuild, which includes putting the 211 KiwiBuild houses under construction or planned for Wanaka's Northlake subdivision on the open market.

Of those houses, 10 have been completed and 20 are under construction.

Speaking in Dunedin yesterday, Ms Ardern said the Government acknowledged the 100,000 houses target led to deals such as the Northlake one which "weren't in the best interest of first home buyers or the KiwiBuild scheme".

The reset was an acknowledgement there were a "handful of areas" where decisions had been made to build houses that "while there might have been demand for those houses, there wasn't demand from first home buyers".

"Moving away from the target we think will make sure that we're building the right house in the right place and for first home buyers that were looking for them.'

Dr Woods was reported saying it was a "mistake" they were built in the first place.

An "aide-memoire" - under the name of Helen O'Sullivan, who resigned as KiwiBuild's head of delivery at the end of August - went to Dr Woods before her announcement, and it lists the "lessons learnt".

In future, KiwiBuild will be "more stringent" in the way it assesses development proposals to ensure a "better balance of risk and incentive between the Crown and developers", and with developers given more incentive to sell the houses.

Officials were, however, wary of upsetting developers when it came to the Government stepping in to buy unsold houses.

Enforcing a discounted price on developers "may impact negatively on our ability to negotiate with developers in future", the memoire said.

KiwiBuild had better information about buyers to enable it to decide where and what type of houses to build, and it was paying more attention to other houses in the same market.

Selling the houses on the open market was considered the best option, to return capital to the Government and also eliminate costs such as rates, electricity, garden maintenance and, in some cases, marketing and body corporate costs.

The houses were not considered suitable for Housing New Zealand because they were not "built to public housing design standards" and might not be in a location to match demand.

Staff in Dr Woods' office have been unable to say when the Northlake houses will be available to buy on the open market.

government looks silly over this....

Just like national looked silly when they were caught selling seats for donations......