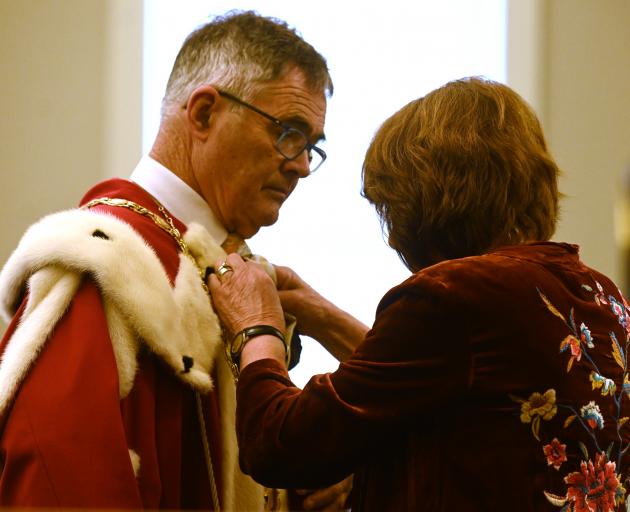 Dave Cull's wife, Joan Wilson, adjusts his robes. Photo: Linda Robertson
''I've come to the end of the most fulfilling decade of my working life so far.''

So began Mayor Dave Cull's final speech in the Dunedin City Council chambers he has presided over for the past nine years.

Tributes flowed from his council colleagues as Mr Cull gave his valedictory speech at yesterday's full council meeting, the final of this term. 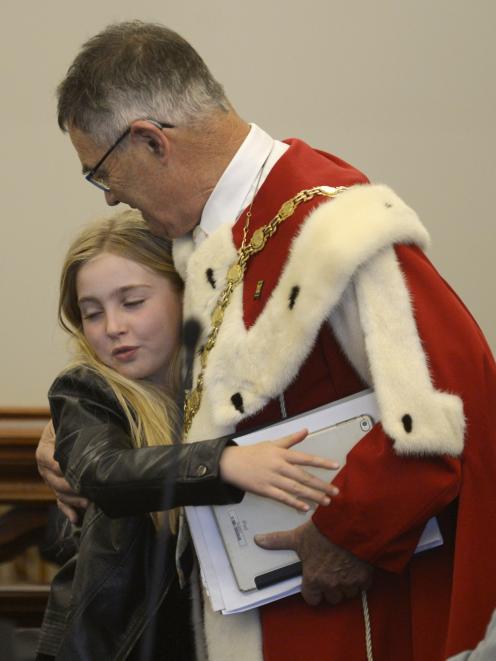 Outgoing Dunedin Mayor Dave Cull shares a hug with 9-year-old granddaughter Carli Hutchinson before the start of his final council meeting yesterday. Photo: Gerard O'Brien
Reflecting on his time in the top job, he said could ''not overstate the privilege'' having the role had been.

''This last term has been particularly satisfying, as I and council have been increasingly able to progress new, meaningful projects and harness the community well to invest in both capital renewals and new initiatives.''

But it had not always been easy, he acknowledged.

He referenced the ''bitter stadium debate that divided our community'', fiscal challenges, and a lack of trust in the council.

''But what doesn't kill you, makes you stronger.''

He also had some advice for those hoping to replace him, many of whom were in the room.

''There is almost nothing a mayor can achieve on his or her own.''

Some in the room may have been holding their breath when Cr Lee Vandervis, a long-time rival, indicated he wanted to speak.

But he thanked Mr Cull for his leadership, even though they were often on different sides of most issues, and for allowing him to have his say.

He could not resist a parting barb, though, thanking the mayor for the $50,000 settlement over a defamation claim.

Mr Cull was presented with a pounamu, and also a mana whakahono, which would be added to the mayoral chains.

There was also plenty of emotion as departing councillors Kate Wilson and Conrad Stedman said their farewells.

Both were reduced to tears at several points during their speeches.

Cr Wilson, who departs after 12 years on the council to stand for the Otago Regional Council, called on councillors to ''dream big'', work with the community, and to remember their rural constituents, saying many felt they were still not being heard. She also praised the council for coming together to create a road map for the city's future.

There were plenty of references throughout the meeting to the ''three musketeers'', Cr Wilson, Mr Cull, and deputy mayor Chris Staynes, who were elected to the council together in 2007 on the Greater Dunedin ticket.

First-term councillor Stedman thanked his family for their ''unwavering support'' during his term.

In a lighter moment, he also offered up a T-shirt bearing the slogan ''14-1'', in reference to the frequent vote margin of many council decisions.

Somehow I doubt that many books will be written extolling the legacy of Mr Culls reign. Rampant ballooning debt, lack of control of council owned entities, grandiose plans to close streets and built bridges to nowhere. No, hardly a legacy to be written about.

Not quite true..
There is a bend on Henley Road named "Dave Cull Legacy Corner", it is next to the two year old slip across the road named "Mt Bidrose. Est 2017". The locals and visitors obviously had enough of the near misses that occur when a slip reduces a blind bend to one lane. It's okay though, rumour is DCC are onto it, adopting their usual 'wait and see' policy.
So his efforts, or lack off them, have been appropriately recognised.

So you want something done and straightaway. Plus it shouldn't cost a cent..
Vandervis PR BS.

Kezza, your comment makes many assumptions and bears no relevance to mine..
Are you just an anti Vandervis bot perhaps...