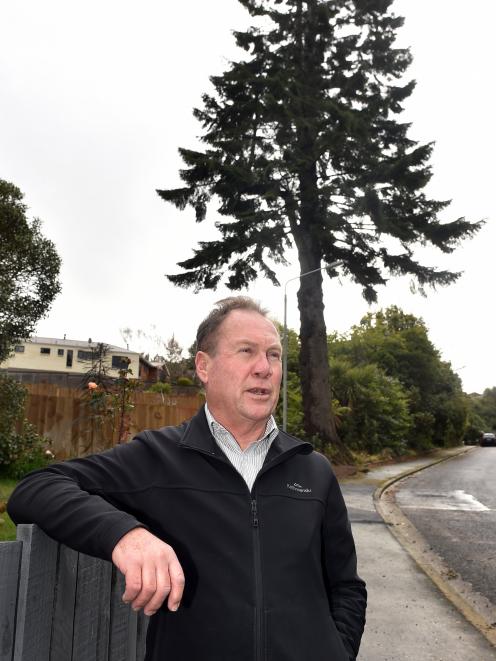 Wakari resident Tony Montgomerie, one of the residents opposed to the felling of the tree in the background. Photo: Peter McIntosh
A Dunedin City Council planner has opposed a property developer's plan to fell a 90-year-old Wakari tree.

The proposed removal of the tree has sparked a 200-page council report, after it became the subject of a notified resource consent.

The consent notification has prompted 10 people or organisations, including the Dunedin Amenities Society, to oppose the plan, and three to support it, before a hearing next month before commissioner Louise Taylor.

Residents of Ferntree Dr last month said they were opposed to plans to fell a tree they said was an important part of the aesthetic make-up of the neighbourhood.

But the property owner responded at the time the European silver fir, protected as a significant tree by the Dunedin City Council, presented a danger both to people and the council infrastructure underneath it.

The report said removing the tree was unjustified because it was healthy and provided a strong community benefit.

It said a water main which developer John Phillips, of Christchurch, said could be damaged by the tree had been in place for 30 years, and there were "numerous'' other trees that had the potential to adversely affect such pipes.

The report's writer, planner Madeline Seeley, recommended the tree be pruned rather than felled, and suggested cable-brace supports to support branches.

A hearing is set for November 6.

Mr Phillips said the main issue for him was safety.

While he did not apply for resource consent, but asked for emergency removal of the tree, which sparked the consent process, said he would attend the hearing.

"Mr Phillips said the main issue for him was safety".
Ah yes that old chestnut.
Pretty lame excuse using 'safety' to get your own way.

The very large tree on the corner of St David Street and Great King St North will be very difficult to extract. Since we cannot go back in time it would be a good idea to plan ahead and remove it now.

That would be deplorable - that tree's magnificent.