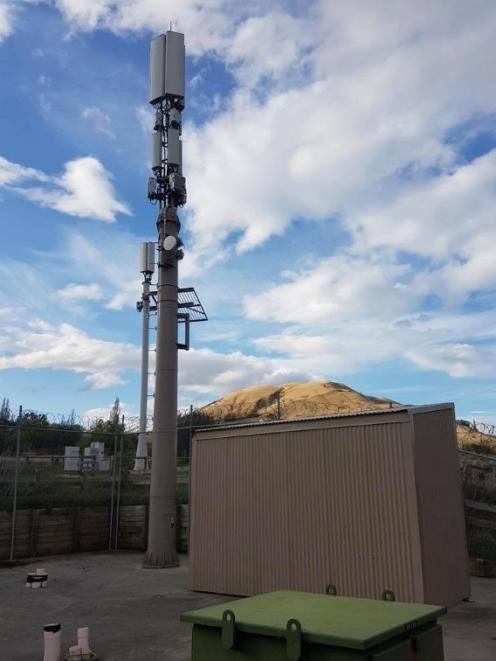 A 5G-enabled site above the Frankton-Ladies Mile highway. Photo: Mountain Scene
5G is coming to Queenstown this week – whether you like it or not.

It’s starting in Queenstown with three 5G-enabled sites – in the Queenstown CBD, a hill above the Frankton-Ladies Mile highway and in the airport vicinity.

Mountain Scene revealed last month that several Arrowtowners, in particular, are agitating against 5G, including starting a Facebook group, launching a petition, ‘Half 5G in Queenstown & Arrowtown area’, and hosting a public meeting addressed by two experts on 5G’s health effects.

The critics allege radiation from 5G transmitters will affect people’s health and diminish bird and insect life, and say it’s been banned in some countries and communities.

She adds her company’s also upgraded its sites to include ‘4G calling’.

Regarding Vodafone’s plans for Arrowtown, Preston last month said it expects to upgrade two existing sites to be 5G-enabled in 18 to 24 months’ time.

The opening statement "5G is coming ... whether you like it or not" sums up the lack of democracy on this issue, and the arrogance of corporates who think they can get away with inflicting a harmful technology on an unsuspecting public.

Thousands of scientific studies have shown that man-made wireless radiation is hazardous to all life. It is no longer acceptable for companies like Vodafone to hide behind obsolete "safety" standards set by self-appointed industry lobbyists.

Can Nicky Preston cite a single test showing that 5G (which uses much higher frequencies and intensities than what we are currently exposed to) is safe? No. Because such a test does not exist.

5G is the subject of patents for insecticide as nothing kills better than millmetre waves. Wake up people! Ban 5G!