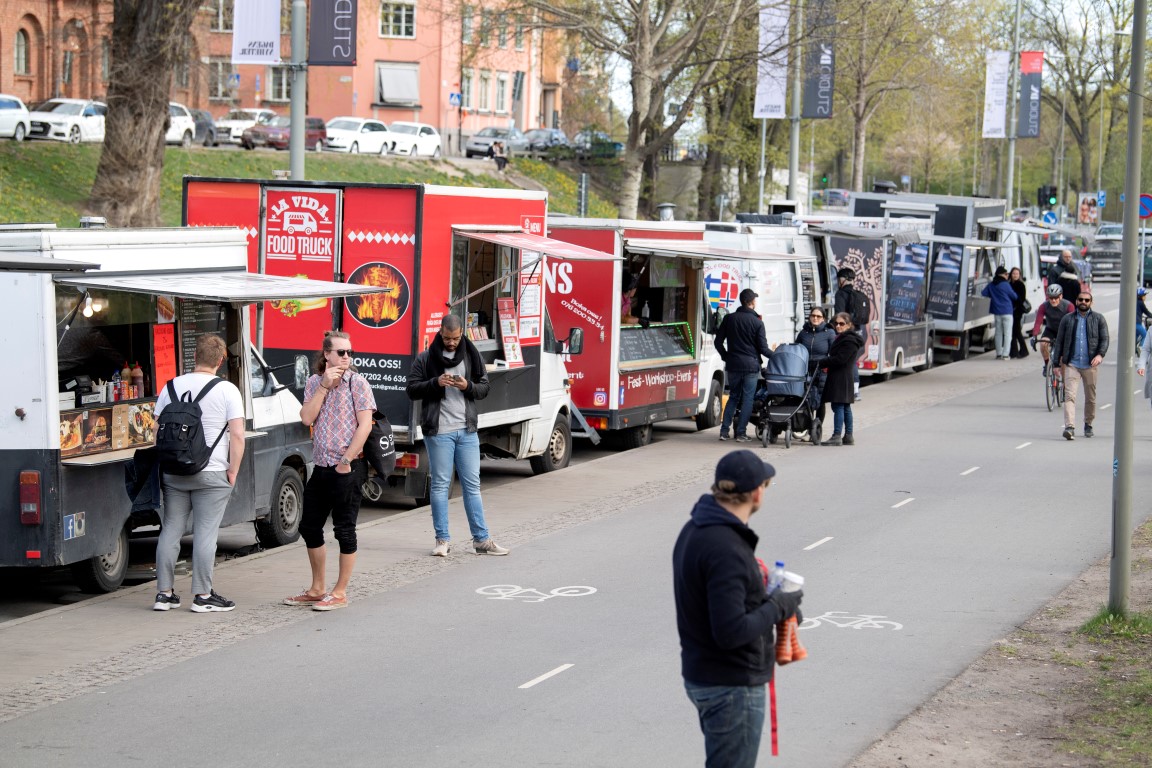 People buy food from food trucks amid the outbreak of the coronavirus disease in Stockholm, Sweden, last month. Photo: Reuters
Sweden's former top virus expert says lockdowns are just a way of delaying the inevitable and warns that New Zealand could face years of quarantining foreigners entering the country, even after wiping out Covid-19.

Johan Giesecke has defended his country's coronavirus strategy, saying lockdowns do not prevent surges in cases or deaths, but merely delay them.

Giesecke believes it is "futile" to attempt to stop the spread and says most countries will end up in a similar position, regardless of their strategy, until treatment can be found.

He believes Denmark, Norway and Finland, which are in full lockdown, will end up with the same number of cases as Sweden, which isn't, as soon as their restrictions ease.

He also says New Zealand will begin importing cases from overseas, after successfully suppressing the virus during lockdown.

To avoid that, quarantine measures will have to stay in place until a vaccine is developed - something he says could take a decade, or longer.

Giesecke spoke out to Swedish media after the country's current top virus expert, Anders Tegnell, refused to recommend a lockdown, as deaths and case numbers continue to soar.

The Scandinavian countries which have gone into lockdown have announced they will begin easing restrictions.

Giesecke says this means it is only a matter of time before their numbers rival Sweden's.

Because of the highly contagious nature of Covid-19, he wrote in The Lancet that "everyone will be exposed to [the virus] and most people will become infected".

He agreed flattening the curve was important to stop hospitals being overwhelmed but argued it was naive to think you could eliminate the virus without the vaccine.

"There is very little we can do to prevent this spread," he said. "A lockdown might delay severe cases for a while, but once restrictions are eased, cases will reappear.

"I expect that when we count the number of deaths from Covid-19 in each country in one year from now, the figures will be similar, regardless of measures taken."

"Our most important task is not to stop spread, which is all but futile, but to concentrate on giving the unfortunate victims optimal care," he added.

Speaking to the Swedish newspaper Dagens Nyheter in a follow-up interview, he used the example of New Zealand, widely praised globally for its Covid-19 response.

He says New Zealand is still at risk from cases being imported from overseas as soon as borders open.

The only way to avoid that, he believes, is by putting every new arrival in a 14-day quarantine.

Can someone send this article to Simon Bridges and Winston please

A 14 day quatantine... basically forever... will kill the tourism industry. No one will take a holiday to a place they have to spend two weeks locked up before the holiday starts.

Well a year ago everyone complained about New Zealnd being ruined by over-tourism and suggested to keep it open only to small groups of 'elite' (read 'rich') visitors. Here's your chance.