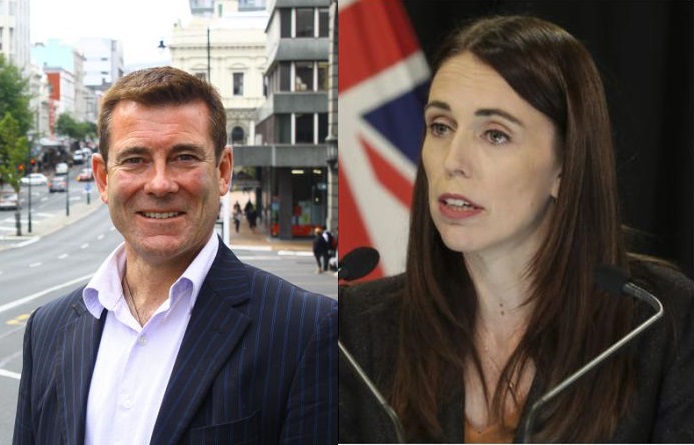 Dunedin based list MP Michael Woodhouse has gone after Prime Minister Jacinda Ardern. Photo: ODT files/RNZ
Political consensus in the fight against Covid-19 is on the verge of falling apart, with the Opposition slamming the Government for its "inhumane" limit on funeral and religious gatherings under alert level 2.

But Ardern has defended the 10-person limit at funerals because of public health concerns, citing mass gatherings at services overseas that had led to new coronavirus outbreaks.

Those concerns increased for funerals and tangi, she said, because of people's tendencies to hug each other for comfort when they are grieving.

National Party leader Simon Bridges said today it was time Kiwis were treated like adults and trusted to do the right thing.

"It's not just unkind. it's inhumane. If you can socially distance at a movie theatre with 99 other people you can do the same at a funeral or a church," Bridges told Mike Hosking on Newstalk ZB.

Until now, the National Party has disagreed with the Government on aspects of the response, but voted in support of all of its Covid-related legislation.

That changed last night as National voted against a bill that set up the legal framework for future alert levels, which it described as enabling "executive overreach" in a way that didn't trust New Zealanders.

The Covid-19 Public Health Response Bill was rushed through most of its legislative stages under urgency, with the support of Labour, NZ First, the Greens and Act.

Its final reading is expected to pass this morning so the bill can be in place by the time alert level 2 begins at 11.59pm tonight. Act may oppose the final reading if the party's proposed changes have not been adopted.

In his first reading speech, Woodhouse condemned the bill for being rushed through under urgency, and said Ardern was "Rob Muldoon with slogans and kindness."

He said an order from the Health Minister could be made without needing to have regard to health advice from the country's top health official.

"That is the classic case of executive overreach."

Legislating for physical distancing, he said, showed a general mistrust of New Zealanders.

"That's where we've got to. The Government doesn't trust Kiwis."

Tomorrow New Zealand will wake up to the relative freedoms of alert level 2, including most businesses reopening under strict rules to enforce physical distancing and making contact tracing easier.

The death toll remains at 21, and with 93 per cent of cases recovered, there are now only 78 active cases, two of whom are in hospital, and none in ICU.

Level 2 is being phased in with bars having to remain closed for another week, while gatherings will be limited to 10 people until a review in two weeks.

The Government said the bill was needed to avoid any legal hiccups as the country moved into different future alert levels. It would effectively allow the Health Minister to issue an order that would make alert level rules legally enforceable.

That might include, for example, the ability for police or "enforcement officers" to close certain premises or roads, ban certain types of travel or congregations, or require people to be physically distant or to stay at home in their bubbles if necessary.

It also would allow warrantless searches of private property if there was a reasonable belief that the alert level rules were being broken.

But Bridges criticised the level 2 rules, saying people should be allowed to gather in groups of up to 100.

He said it didn't make sense to allow 30 professional rugby players to tackle each other or up to 100 people to be in a mall or a cinema under level 2, but to limit gatherings at a funeral to 10 people.

"This outcome is not kind. In fact it's inhumane," he said at the bill's first reading.

Places of worship should also be opened up, he said, because physical distancing can be observed and contact-tracing made easy for those in a church, mosque or temple.

Health Minister David Clark said he would take advice from the director general of health, and consult with the Justice Minister and the Prime Minister, as well as other ministers as appropriate, before issuing an order.

He also has to consider social and economic factors.

Attorney-General David Parker said the bill had bypassed select committee scrutiny because of the extraordinary circumstances of Covid-19, but a draft of the bill had been made available to the Opposition and to legal experts.

Earlier Ardern conceded that the decision to put a 10-person limit on gatherings, especially for a funeral or tangi, was "causing pain".

"The idea we would force people to not be able to comfort each other is very hard to comprehend.

"This has been very hard ... ultimately we want to protect people."

She said large gatherings had already led to clusters of infection in New Zealand, but that risk was greater at a funeral because of how people physically consoled each other.

Funerals overseas had also led to further outbreaks. One February funeral in a city in Georgia, US, is thought to have drawn more than 100 mourners and subsequently led to hundreds of Covid-19 cases.

Yesterday the devastating impacts of Covid-19 on the tourism and hospitality sectors was laid bare as operators appeared before the Epidemic Response Committee.

A survey by Tourism Industry Aotearoa revealed that 93 per cent of all tourism operators have taken up the wage subsidy scheme, while Sudima Hotels had cut staff by 80 per cent.

Ardern said later that there would be additional support announced tomorrow in the Budget, and containing the virus was the best way to get the domestic tourism sector back up on its feet as soon as possible.

In a pre-Budget announcement, the Government also pledged $3.92 billion to DHBs to ensure they were prepared for a future Covid-like crisis, while a further $282.5 million would clear the Covid backlog.

There are an estimated 153,000 more surgeries and procedures, radiology scans and specialist appointments needed to catch up from the Covid-19 disruption, which will likely take years to clear.

It means that the Church is not allowed to run the state. The Church is not in charge, it is subservient to the state and subject to the laws of the state. Whenever churches have exerted power over the state it has resulted in some of the most obscene crimes ever committed on the planet. That is why they are kept out of the government.

Church was State, and State was not Secular, but Roman Catholic.

The Right Thing. Go Ahead Boldly, with Risk to young and old.

With attitudes like those of Woodhouse, and other National MPs, it's no wonder they're so far behind in the polls. I for one will be giving them the big swerve come election time.

I totally agree. National MP's are making fools of themselves trying to pick on every little thing the current government is doing. I know that's what the opposition does but with the hell we have had to go through in the past six weeks, which was necessary, I believe they should get over themselves and let the govt get on with getting the economy moving again. They have definitely lost my vote in September.

The line about the church wine was hilarious. Go Michael. The state now appears to rule the church. I thought there was an agreement for separation.

It's unbelievably cruel, not to mention inconsistent, to deny people the right to see dying family members.

Untold thousands of people can trot off to the supermarket but we can't allow a handful of people to comfort loved ones in their last moments?

This disease does not just attack the people who break social distancing rules, it also kills the people who have to try to save them. I don't mind you dying to see a dying family member, but I object to your killing other people to do it.

At what point will the media cease with "slams" and move on to other techniques?

LOL, Desperate time for the Nats when they have to use Muldoon as a swear word. It shows that they have reached the bottom of their barrel.
New Zealand should be thankful that these tRump types were not in government this year or New Zealand right now would be in exactly the same place as America. These Greedisgoodites would be happy watching your parents and your babies die so long as they can make a buck.
Remember come the election, if you vote for these people, and the virus comes back, thousands of Kiwis will die. They want big funerals and lots of them.

If National were in power we would be able to attend funerals. We would also have many more funerals to attend. So much was sacrificed to get to where we are now and now National want to give up. It's hard, but stay the course New Zealand, we are nearly there.

Now listen, Michael Woodhouse, Ashley and I have tried everything we can to help you understand, but it seems to be a losing battle, so, we bought a book for you to read. You can read, do you? It's a large book with large print, simple words and a lot of pictures, so you ought to be able to finish it by Christmas! Off you go, be a good boy now.....

Michael should move to the North Island - it would raise the IQ of both Islands.

Woodhouse ever heard the saying love begins at home? Mentor coach your Brothers and family first make sure they are doing the right thing and then maybe then look at National and then the government. Did the ODT especilly select that pic, because of 'The Sun Burn' lol