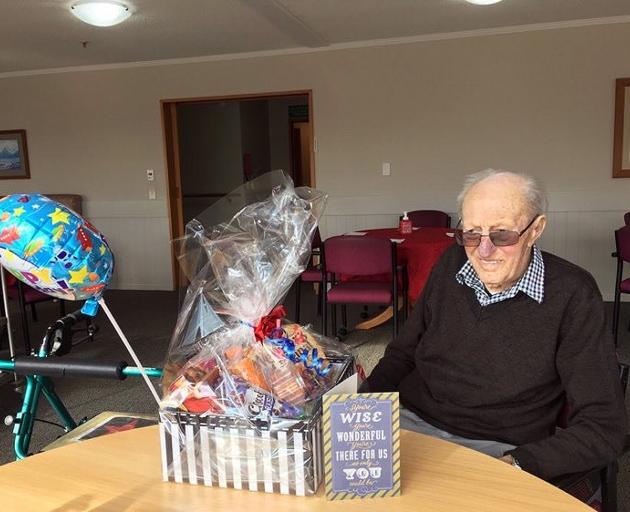 Happier times ... Maurice Skinner, of Winton, celebrates Christmas at the Cargill Lifecare rest-home in Invercargill last year. PHOTO: SKINNER FAMILY/SUPPLIED
Families in the South are appealing for ‘‘compassion and common sense’’ from authorities as they attempt to farewell loved ones under Level 2 funeral restrictions.

Speaking on behalf of his Winton family, Grant McMaster said his aunt Val Skinner (86) had been ‘‘in heartbroken tears’’ since she learned on Monday a ‘‘small, controlled’’ graveside service for her husband Maurice could not take place tomorrow, as it would contravene Level 2 regulations restricting funerals to 10 people.

‘‘We’ve been told all along funerals under Level 2 would be up to 100 people. We only want 22 to see Maurice off, and are prepared to observe all the necessary safety rules.

‘‘All we want is a bit of compassion and common sense, but we’re being treated like kids.’’

Sue Jones, of Hamilton, said she was ‘‘devastated’’ only 10 people could go to the second funeral she had had to organise during the recent pandemic.

Mrs Jones’ Dunedin brother had died at the beginning of lockdown, followed more recently by her sister.

She said she had hoped Level 2 would mean more family and friends could attend her sister’s funeral in mid-May.

‘‘It seems heartless they’re allowing people to go to the cinema for a laugh, or groups of 10 to go to a restaurant for a laugh, but you cannot cry with all of your family at a funeral.’’

Mrs Jones would now attend with her remaining siblings, but their partners would not be able to join them.

Clutha-Southland MP Hamish Walker, who was contacted by the Skinners, said he had learned of at least one other Southland family in a similar position.

‘‘What the Government is doing is completely inhumane, when cafes, sports and other facilities can host up to 100 now.

‘‘I’ve written to the Prime Minister asking why these families should have to choose who can attend.’’

At a press conference on Monday, Prime Minister Jacinda Ardern said she was aware the decision would ‘‘cause pain’’ but funeral numbers had been restricted because of the health risk of mourners comforting each other physically, she said.