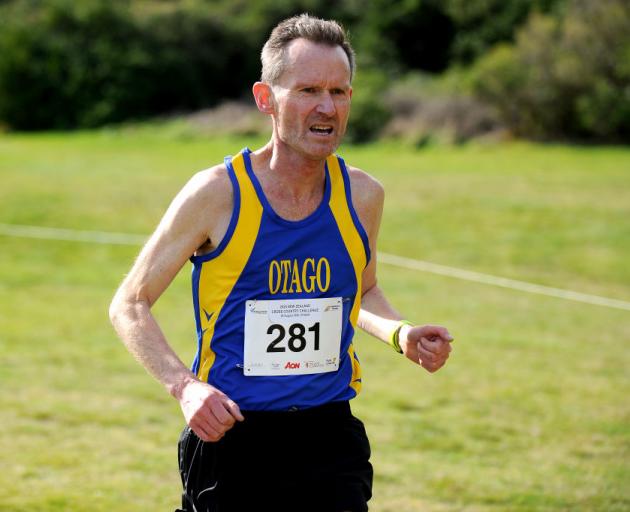 Robbie Johnston of Otago in action during the Athletics New Zealand Cross Country Challenge at Chisholm Links. Photo: Getty Images
Otago runner Robbie Johnston bagged a record on Saturday but it was one he did not want.

Johnston (53) was disqualified from the masters men’s 50-54 race at the New Zealand cross-country challenge at Chisholm Links on Saturday for spitting.

Yes, having a hoick, or two, put Johnston out of the race, which he won — or was first across the line.

‘‘I suppose with the Covid rules they have brought this in but it seems a bit over the top. If I was feeling crook then I wouldn’t have run anyway,’’ he said.

Like race walking those that spat would face a yellow card which would be a warning followed by a red card for disqualification.

The double Olympian said he never saw any cards and was puzzled that only the masters race was seen as having runners who broke the rules around spitting though Johnston was the only one disqualified.

‘‘When you are running hard you do get flem in your mouth and I was running hard. But I can not remember spitting. I saw people spitting before the start of the race.’’

Athletics Otago chairman Kevin O’Sullivan, who helped run the event on behalf of Athletics NZ, said athletes traditionally do spit but in these Covid-19 times athletes had to be careful and follow the rules.
It was an understandable lapse from Johnston, O’Sullivan said.

Surely Mr O'Sullivan is not serious! What does he expect Johnston to do — choke on his own phlegm? That would be a lot more dangerous than any amount of spitting!

On what was otherwise a great day, the ability of sports administrators to snatch defeat from the jaws of victory remains one of life's great mysteries.

If throat clearing is prohibited, you can't run the event.

If it was an understandable lapse they should not have worried about it.The major clusters in Qtown & Bluff were caused by border entry.Runners of NZ Champ Standards who travel to Dn are not going to come if they are crook.And no-one down here has the virus.My personal experience is the what I call Athletics [ Track N Field] tends to have more officious officials,whereas harriers is relaxed in that way.I could not run without clearing my nose at some point [prohibited or allowed at this event ?]