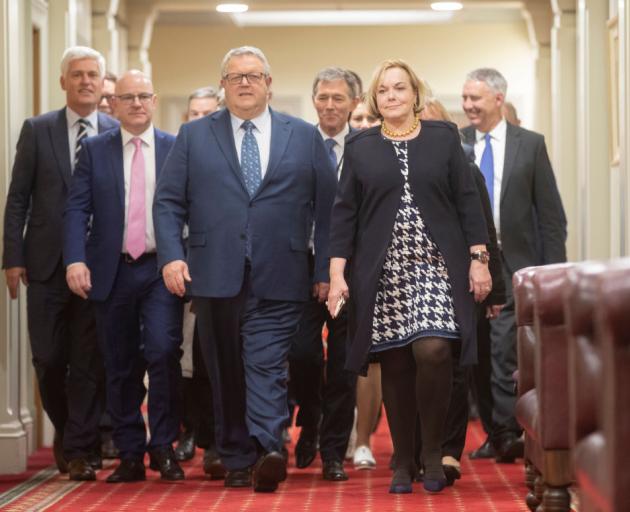 Photo: Getty Images
All is not glum and blue for National in the wake of its weekend election thumping, despite first appearances.

The party has dived from 54 seats to 35. It secured a meagre 27% of the vote and was out-polled by Labour in the party vote in every South Island electorate.

National has had three leaders this year, was smeared by individual scandals and plagued by leaks and disunity. Its membership numbers are mediocre and it lacks purpose and direction. Meanwhile, Jacinda Ardern shines like a star, seemingly untouchable in these Covid times.

But politics, and life for that matter, has its rollercoasters. People, organisations and sports teams have their highs and their lows. Many sink, seemingly on their last legs, only to rise again.

National and Labour have both been topsy-turvy in recent times.

National bombed to just 21% in the 2002 election and was in power in 2008. Labour was polling about 24% only a few months before the previous election.

National can reassure itself that even with unpopular Simon Bridges in charge — and with Ms Ardern already displaying her trademark positivity and empathy — it was polling between 40% and 45% earlier this year.

Covid changed everything. Ms Ardern was on television day after day as crisis prime minister. Such circumstances provide leaders, at least until they make a sustained mess of their responses, with the platform and purpose to rally the populace. People seek loyalty and unity behind their flag.

Remember, Mr Bridges had legitimate questions to ask, but the tone was incorrect and a scared nation did not want to hear.

National, for its part, responded erratically, at times arguing for looser controls and sometimes for stricter measures. The public knew that National in charge would also make mistakes, and people suspected business interests would be promoted ahead of securing safety.

The leadership shambles and the loss of the experience, skills and public appeal of Paula Bennett, Nikki Kaye and Amy Adams then made a mockery of the "strong team" slogan.

In desperation, National turned to Judith Collins for leadership. She displayed pluck and vigour as National endeavoured to prevent a bloodbath. Despite the election rout, National would likely have fared even worse under Mr Bridges or Todd Muller.

The party, obviously, must review, reflect and rejuvenate. And, with the lack of suitable options, it has to put its faith in Ms Collins for now.

There are excuses for the dismal showing, and intriguing factors come into play. How many National voters swung to Labour, for example, to undercut potential leverage from the "dangerous" Greens?

Nevertheless, the scope of the red surge is positive for National in one way. That huge jolt should force it to do far more than tweak its structures, culture and candidate selection. It should engender a tight-team ethos, although that might be a vain hope. It should encourage the party to look at its raison d’etre; the likes of the place of individual responsibility, support for business and therefore employment and prosperity and compassionate, realistic conservatism.

There is scope to recapture the middle ground, those voters who supported former prime minister John Key. National can promote a programme and people who believe in fairness and a fair go, who will target taxes with prudence and who accept the diversity of modern New Zealand and climate and environmental challenges. There is no future in hard-right policies or fundamentalist social attitudes.

National, as it confronts its myriad challenges, will also know that Labour’s support easily can evaporate as harsh economic times are predicted.

Maybe it will be at least six years before National regains power. But even the three years to the next election is a long time in politics.

The combined numbers for the three liberal parties Labour, Greens and Act suggest that conservatism is finished as a political ideology in NZ.

Since neoliberalism, conservatives haven't conserved anything. Conservatism has been colonised by Right Radicalism.

Board the cows! We've come to enslave your marigolds.

"National has had three leaders this year, was smeared by individual scandals and plagued by leaks and disunity. Its membership numbers are mediocre and it lacks purpose and direction. Meanwhile, Jacinda Ardern shines like a star, seemingly untouchable in these Covid times", how many times did the labor party change leaders again before they hit upon that supposed "star"?, anyway what goes up must come down.

Have you considered stable government? Terrible, I know, but that is what we have.

Stagnant, sluggish, and lethargic are also stable states that describe this government.

Hull, now you're just being sully. You know we don't have any marigolds.

This is the agenda of extremism: marginalise opposition by saying they are not 'right thinking'. Normalise radical agenda by propaganda. Attack non ideological concepts like 'humanity'. Demonise an 'outgroup' as responsible for disadvantage of the majority.

Nobody can 'make' us do anything. We are our own people, due to the maligned system of Liberal education.

Anyone questioning the dictates of authority are automatically labelled a conspiracy theorist. It’s a good method to shut people up. Label and isolate as if they’re crackpots for asking questions.

I guess we are all subject to your definition of extremism and propaganda? Just another lefty we all need to ignore! Hoist you say? Yep, into the trash in!

Well, yes. Our collective experience of extremism was the white supremacist attack in Christchurch.

I think the photo says it all about what's left of the National Party, white men in grey suits. The conservative rump. The guy with the pink tie will surely be pulled into line.