The banter on the back of a rubbish truck may be quite different from what you would expect.

For 18 years, it was where artist Clive Humphreys — who, this week, has been named the acting head of Dunedin Art School — spent his mornings. Arriving in Dunedin from London’s East End in 1975, the former secondary school art teacher found the art scene in New Zealand small and rudimentary.

He had emigrated with the expressed purpose of setting up his own arts practice. But he soon had to flag his "London expectations".

"Initially, I thought I’d like to work as an illustrator," Humphreys recalls. 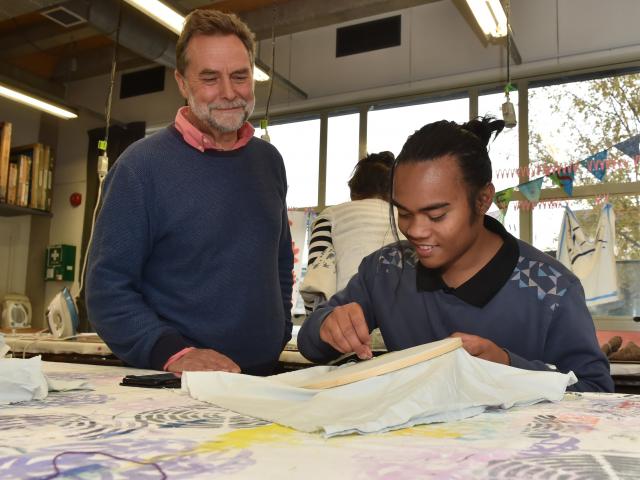 Tenamo Kaboka, who is working with textiles as part of bachelor of fine arts studies, talks to Clive Humphreys. Photo: Gregor Richardson.
"So, I had prepared a folio of book illustrations, but then found that the book industry in New Zealand was quite modest.

"So, I set up my own studio where I was mainly producing silk screen prints."

To earn a liveable income, however, he had to work as a labourer.

On the surface, it might appear a strange mix of professions. But it suited Humphreys, and others of like mind. The attraction was the early finish.

"Start early, keep fit. And I was able to spend most of the afternoon in my studio."

Quite a few artists, musicians and writers filled the ranks of rubbish-truck runners during the 1980s and 1990s.

"One of the Vandervis brothers, who was a cellist ... A guy called Bryan Poole, who is an etcher of botanic illustrations in London at present ...

"A couple of years ago, the Smithsonian bought a collection of his prints of New Zealand flora and fauna.

"The conversations on ‘the carts’ were quite stimulating."

It was an early and enduring taste of the community engagement that the arts, and the art school, is embracing.

"The previous head [of the school], Leoni Schmidt, had a vision for the school that saw it moving out into the community.

"The days when artists were in a little room by themselves is long gone. The arts are looking to engage with the community around them ... I want to continue that vision. I think it is very important."

Humphreys’ appointment as acting head of school is for 18 months.

It is a long way from those early days of splitting his time between rubbish and silk.

His first show in Dunedin was in 1978, in the old wing of Otago Museum.

"It was quite a vibrant space. I saw exhibitions there by Jeffrey Harris, Joanna Paul and others."

Over time, he moved from printmaking to painting. He has had regular exhibitions in Dunedin and Auckland and still maintains his own studio in Princes St, Dunedin.

It was an invitation by Grahame Sydney to take the silk screen printing component of an evening art class that first got Humphreys’ toe in the door at the art school.

Later, he took over teaching Sydney’s class and then began teaching the full-time students.

During his tenure, Humphreys has spanned the disciplines, teaching drawing, printmaking, painting, textiles and jewellery. Most recently, he was a principal lecturer and a studio supervisor for postgraduate students.

There is a strong tradition of different artistic disciplines within the school. There are good arguments for protecting and maintaining that tradition, Humphreys says.

"We need to acknowledge that many artists will work in multi-disciplinary ways. But our belief is that that starts with the understanding of the disciplines. It doesn’t start with collapsing them into each other.

"I think it’s really important that we maintain that.

"So, we have a vision of the school where there are clear studio areas, but giving students a lot of freedom to move between those areas."

The Dunedin Art School, founded in 1870, was led for its first 38 years by David Con Hutton. It is New Zealand’s oldest art school and, in Humphreys’ opinion, the finest art school, with the best facilities and a long tradition of hands-on, studio-based teaching.

Art is "hugely important", both personally and for society, Humphreys says.

"Ever since I was a child, aged 9, who used to go off with his sandwiches to the National Gallery ... it’s been an overwhelming interest for me. Much of my life has been about how I can satisfy that engagement while still earning a living.

"And in the turbulent political times that we are now living through, art envisages alternatives and it questions common assumptions ... The function it has now is crucial."

The students the school produces are equally valuable, Humphreys says. Those who have passed through its doors have included Frances Hodgkins, Robert Nettleton Field, Colin McCahon and Ralph Hotere.

And graduates have gone into fields far beyond the traditional arts.

"They have a skill set that is wholly transferable to other occupations. Because the fine arts involve critical thinking, problem solving, the bringing together of ideas ... and a whole set of manual skills as well, which as a package makes the graduating art student an adaptable and attractive employee.

"Particularly given the way the world is evolving, where much of the hack work is and will be done in digital and robotic ways, critical thinkers and problem-solvers will be invaluable to society."

Without a doubt one of the most inspiring people I have had the good fortune to learn from. Clive's wisdom and encouragement has shaped much of my adult life. Great to see another generation will share this privilege.