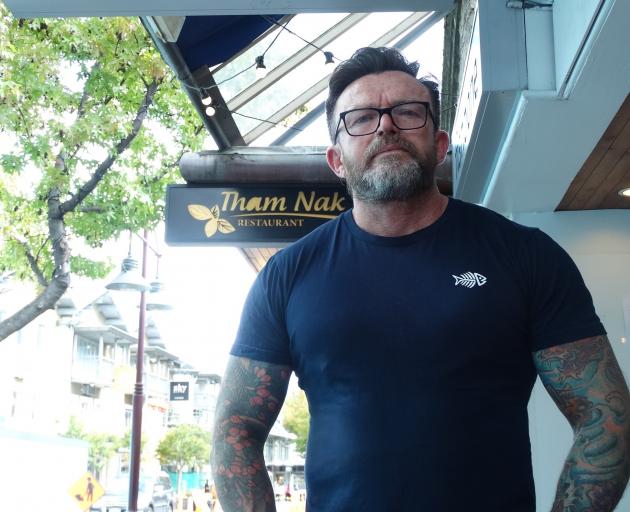 Fishbone owner Darren Lovell. PHOTO: GUY WILLIAMS
One of Queenstown’s longest-running independent restaurants will close its doors for good tomorrow night, amid predictions of a "bloody long autumn" for the resort town.

Fishbone would have marked its 30th anniversary in October.

However, owner Darren Lovell said turnover 90% down on last February and a meeting with his landlord had sealed the restaurant’s fate.

A "devastated" Mr Lovell, who made national headlines in November after penning a "Queenstown is not OK" opinion piece in the Mountain Scene, only reopened the seafood restaurant three weeks ago as a "last shot" after a six-month pause in trading.

In its place he temporarily opened Love Chicken The Pop-UP, an offshoot of his Queenstown Central outlet in Frankton.

He had hoped a transtasman bubble would be in place by next month, but by the time he had committed to reopening Fishbone, it was clear the bubble was not happening.

The resort had been "cut adrift" by the Government, and he wondered who would be left standing in the town centre when international visitors eventually returned.

"The restaurants beside me are dead, it’s not just Fishbone.

Mr Lovell said his landlord had been "as generous as he could be" with rent discounts, but it was not enough.

He had poured all his savings into the business to keep it going this long: "I’m more or less destitute."

He said he was "devastated and heartbroken" by his decision.

"Fishbone was more than a business — it was a passion and I’m completely gutted we have to close."

Fellow Beach St business The Jade and Paua Gift Centre has been operating for 46 years.

Owner Ian Caldwell said his trade was down about 80% on pre-Covid days.

He was also dealing with the "double whammy" of a street upgrade for the next 12 months that would deter more customers.

Mr Caldwell said he had support from his landlord and so had many other tenants, but he predicted half the shops on Beach St would be closed in six months’ time.

The Cow, Queenstown’s oldest independent restaurant, is trading at 20% of pre-Covid business, while paying 100% rent since the end of winter.

Owner Malcolm Price said he was staring at a "bloody long autumn" and was already closing at lunchtime three days a week to cut costs.

"The bar that sells $5 drinks is going really well, but everyone else is doing terribly."

Queenstown tourism business broker and consultant Adrian Chisholm said there was not a business in Wakatipu that could survive on pre-Covid rent levels.

He believed ‘‘variable rent programmes’’ had to be agreed between tenants and landlords, in which tenants paid a percentage based on what they would have paid pre-Covid.

Queenstown accountant Craig Benington, of Findex, said he did not know a single business that was not negotiating with its landlord for reduced rent, ‘‘or just not being able to pay their rent’’.

‘‘There’s certainly some places closing, or about to close.

‘‘They’re hanging on with the goodwill of their banks, but how long that goes on for is yet to be determined.’’

Mr Benington said businesses in Wakatipu were ‘‘just living on hope that the borders are going to open’’, and believed it would be helpful if the Government indicated a ‘‘potential date’’ for that to happen, so they could plan.

‘‘But we can’t even get that commitment.’’

Who do the building owners think will rent their buildings if they lose existing tenants? Better to come to a suitable agreement that covers outgoings than have an empty building.