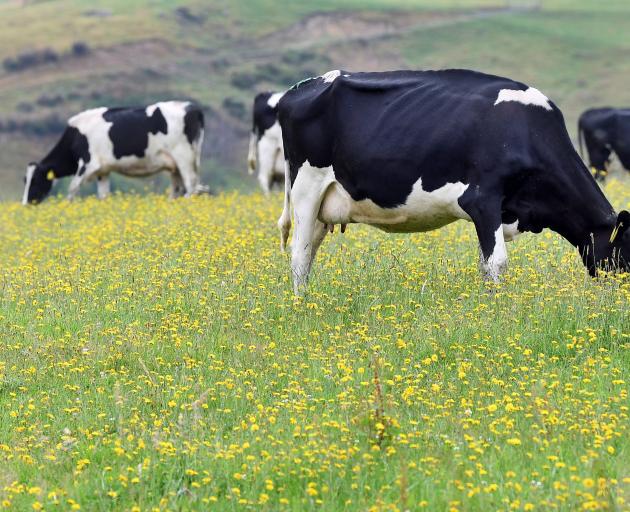 Photo: Stephen Jaquiery
Otago contributed 6.9% of New Zealand’s emissions in one year despite being only 5% of the population, a new report has found.

The agricultural industry was estimated to be the leading contributor to those emissions by a significant amount.

An inventory on Otago’s greenhouse gas emissions between July 2018 and June 2019 was presented to Otago regional councillors during a data and information committee meeting yesterday.

Total sequestration — or removal of carbon dioxide from the atmosphere — from land use, land change and forestry was 2,640,398 tCO2e.

That offset about 47% of the region’s gross emissions, resulting in a total net emissions for Otago of 3,180,627 tCO2e.

Otago Regional Council strategy manager Anne Duncan said the inventory allowed the council to see where the biggest emitters in each district were.

It estimated that the agriculture industry, particularly sheep and beef activities, accounted for 65% of emissions in Otago across four of the five districts.

Transport was the biggest emissions source in the Queenstown-Lakes district and a significant source in Dunedin. It accounted for 16% of the region’s emissions.

Electricity usage made up a significant proportion of stationary energy emissions, which accounted for 12% of emissions across the region.

Dr Duncan said the inventory was an important first step towards reducing emissions in Otago.

"It will help us understand our footprint, mitigation options and scenarios, and it will inform discussions and engagement with our communities."

Meanwhile, some councillors felt a national rule regarding which trees are counted towards carbon sequestering was unfair and too strict.

Only trees that reach a height of 5m or more when mature are eligible to be used to offset emissions.

Subsequently, Cr Laws moved a motion that "the report be referred to the council’s strategy and planning committee for it to review the 5m tree rule and other methods of capturing carbon sequestering of tussocks, soil and other horticultural activity", which was carried.

The committee also agreed to refer the report to the Otago Mayoral Forum.

The council has proposed undertaking an inventory of Otago’s greenhouse gas emissions every two years.

Interesting report but a very disappointing reaction from our councillors. Instead of using the report as a base line to target and measure future emission reduction, they instead want to waste time and money disputing how the numbers were calculated! I notice they are not questioning all the possible gross emissions not included in the calculations.! Any protection of the environment and pollution reductions will likely happen despite our councillors not because of them. They are just standing in the way of progress. At the next elections I urge all to vote for individuals who put Otago's environment and wonderful ecology above all else, people who recognise the wealth of our region's natural beauty rather than their own personal measure of wealth.

There are to many factors to create a standard bovine methane emission, animal age, breed, diet and sex all have a roll to play. A Dairy farm will have a bigger methane out put than a beef farm.

All this shows is that Otago is far more productive than other parts of NZ.

Mate !!! Far too much logic for the ideologically possessed.
Even their cooked up numbers makes a lie of the headline.
If agriculture make up 64% of the emissions (3,725,456 tC02e) and it offsets (2,640,398 tCO2e.) with trees over 5 meters tall then the nett contribution to emissions is 1,085058 tCO2e or 18.64%.
How everyone else has managed to sequesented the other 540,229 tC02e is beyond me !!!
The fact that accountants Ernst Young can publish such rubbish and ORC can accept it shows how intellectually corrupted the whole process has got, even at this early stage.
With the current rate of coal burning for electricity production exceeding the current EV fleet consumption, every EV is a bigger polluter that petrol. I'm even willing to bet the writer of the report drives an EV and pats themselves on the back for their contribution to saving the planet.
The status shuffle to meet with the PC rhetoric has started it's roll.
I would say given these numbers, the cities are the biggest polluters and they should be phased out as soon as possible !!!