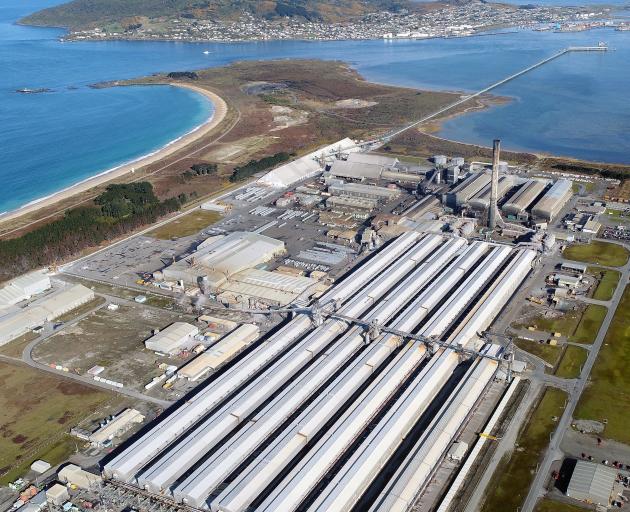 Southland has been gearing up to cope with losing hundreds of jobs and lots of spending when the smelter shuts at the end of 2024. Photo: ODT files
Government officials are confident Tiwai Point aluminium smelter will not close if aluminium prices remain high.

But they warn there are risks this will add millions of tonnes to greenhouse gas emissions.

Southland has been gearing up to cope with losing hundreds of jobs and lots of spending when the smelter shuts at the end of 2024.

"While NZAS' electricity supply contract with Meridian ends in December 2024, in conjunction with its announced closure, we assess that there is a good prospect that the smelter will continue to operate beyond that date if the outlook for the aluminium market remains sufficiently positive," an update to ministers said.

Cheap power deals for Tiwai have been a political hot potato for years.

It calculated this could add 12 million tonnes of CO2 emissions from next year until 2035, well above the commission's "projected transition pathway".

"This is because smelter closure assumes that more emissions-intensive electricity production will be taken offline due to Manapouri's surplus supply entering the grid."

A key commission recommendation is the country "decarbonise" the energy system, including by favouring electricity that has a low emissions impact.

Several businesses and iwi are exploring if Tiwai Point can be used for green hydrogen production.

These transitions are part of plans the Ministry of Business, Innovation and Employment was meant to release in October, but its 'Just Transitions' report had been delayed now until next year, the ministry told RNZ.

The company and its majority owner Rio Tinto have been embroiled in fraught and now-stalled negotiations for over a year with the government about cleaning up the smelter.

The OIA documents show the company told Crown negotiators it had about $47m in an Environmental Restoration Account with Inland Revenue. It has also made provision for almost $300m of remediation costs.

NZAS has a power agreement which expires in December 2024, a NZAS spokeperson said in a statement.

"Rio Tinto remains committed to remediating the site and can confirm NZAS has deposited funds into an environmental restoration account under the Income Tax Act and has provisions for closure costs in its accounts," the statement said.

"could add 12 million tonnes of CO2 emissions from next year until 2035 well above the commission's "projected transition pathway"."
"This is because smelter closure assumes that more emissions-intensive electricity production will be taken offline due to Manapouri's surplus supply entering the grid."

So the problem is that the CC Commissions targets won't be reached not that CO2 emissions will increase !
A major contributor to increased aluminium prices is the demand for transmission cables from renewable electricity sources which is likely to increase !
Closing Tiwai to meet our CCC target will most likely increase global emissions because the cheapest aluminium production is currently from FF energy, in developing nations, close to bauxite deposits !
This highlights the hypocrisy of countries virtue signalling to the UN.
It's no different from the commune extolling it's devotion to the party cause while the country sinks into poverty
In this case the commune has been replaced by the country and country with the developed world
I've got no issue with moving forward to energy sources that are sustainable
It's with the stupidity of the planned pathway to get there !!

Way past time to play the same hardball they use and get a True Power rate from them. If they wont....and close up...FIRST lock them to FULL remediation of THEIR pollution. Then use OUR Renewable Hydro Power to Electrify the Southern Rail Network. Job creation. Carbon saving. Highway saving from damaging heavy trucks.....

I asked Shane Jones to consider fronting the cash for the clean up from the Provincial fund. No luck. Bad governance has provided us this problem in retrospect letting Rio tino off the lease here. All those Ministers should be made to dig it all up by hand for their lack of backbone. I sense there is another agenda at work here being as the so called figures don't add up to anything else. More garbage solutions produced by those wanting cheap power supply at our expense. Have you tried to buy lumber recently? we have out sourced everything and now cant find the materials to build a house with.