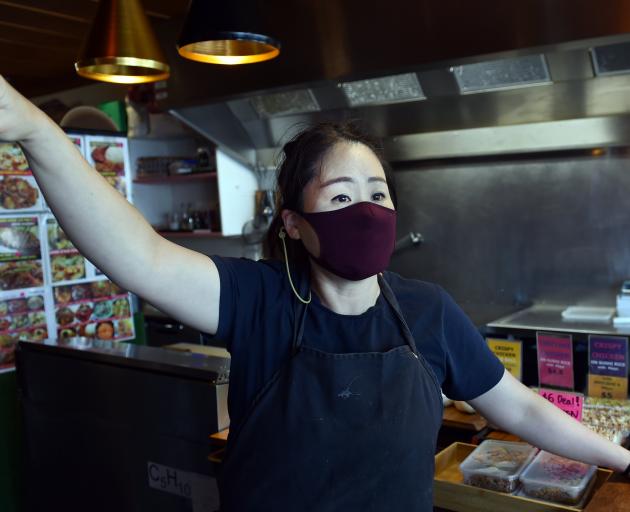 Tokyo Express owner Nicole Lee said the timing of the closure was not ideal, as the business was just coming out of its traditionally quiet period.

Business slowed between October and January before picking up again when students returned to town.

"From the end of February it’s time to pick up all our sales because we’ve been quiet for three, four months, and they’re going to block the road."

Parts of Frederick, Filleul and London Sts are to be closed to vehicles from Tuesday of next week until April.

The closure will allow enabling works to take place before the George St upgrade begins.

Many of Tokyo Express’s customers would park outside and pop in to grab some takeaway food, Ms Lee said.

She doubted those customers would park in George St and walk past several other restaurants for a less convenient option.

"Maybe my loyal customers will come, but it’s very hard for them and there are many other options."

She was expecting to lose half her customers during the time the road was closed.

The Fix co-owner Paula Milmine said 50% of the cafe’s business was drive-up coffee sales through its front window.

"Our biggest worry is that we’re going to lose loyal customers who will go somewhere else for the three months the road is closed, and they may not come back because they find somewhere else that they enjoy."

Ms Milmine said she received a letter from the Dunedin City Council late last year informing her of the street closure, but there had not been a chance for consultation before the street closure dates were set.

She agreed that completing the works in the quiet period between November and February would have been a much better solution.

Ms Milmine had raised concerns with the council, and was meeting a council representative on Monday to discuss the situation further.

Despite the concern for her business, she said she respected the need for the work to happen, and in the meantime would continue to work hard to meet the needs of her customers.

Central city plan project manager Dr Glen Hazelton confirmed he would be meeting concerned business owners early next week, and that extra five-minute parking spots would be coming to George St shortly to help customers drop in to the affected businesses.

Businesses in the affected areas were hand-delivered letters explaining the plans in November, but the council did not receive any feedback at that time.

"We appreciate that any disruption can be challenging, but will be working to find solutions with businesses to reduce those as much as possible where they engage with us."

AA Otago district chairman Malcolm Budd said while there were bound to be some disruptions to traffic while the George St upgrade and related works happened, it appeared the council was doing what it could to mitigate them.

It's a shame for the owners of shops in the Wall St/Meridan Mall that cars are excluded, they'd double their trade overnight if only they could turn it into a drive through.

Well thats one big failure for the vaunted project manager Dr Hazelton. Plan street closures, don't make the closures public until its too late to complain.

And the idea that 5 minute carparks somewhere else will enable people to still buy products from Frederick st is just fanciful rubbish. How long does it take to walk 100 - 150 metres, order and wait for coffee or food then get back to your car? More than 5 minutes. I suppose DCC will be helping by having parking wardens on hand to issue tickets when your food buying takes 10 minutes instead of 5.

Would be interesting to find out what would happen if all said "ticket holders" decided to plead "not guilty" and, as is their right, to have the matter decided by the courts.

But then again, as ratepayers, we are fully aware of the DCC's, penchant for spending money, so I have no doubt they would get their legal "team" together to prosecute such horrific criminal acts !!