CCTV has caught the moment a bus driver was viciously punched in the head by an irate passenger, who was then kicked in the back by the dazed driver in retaliation.

The incident, which occurred on December 17 on Queen St in the CBD, has resulted in the driver getting a formal warning by NZ Bus, while the assailant has never been caught.

Froggatt said drivers needed better training in how to deal with unprovoked attacks. He is appealing the warning and preparing a personal grievance case on behalf of the driver.

"I don't think he needs a warning. He just needs some retraining. 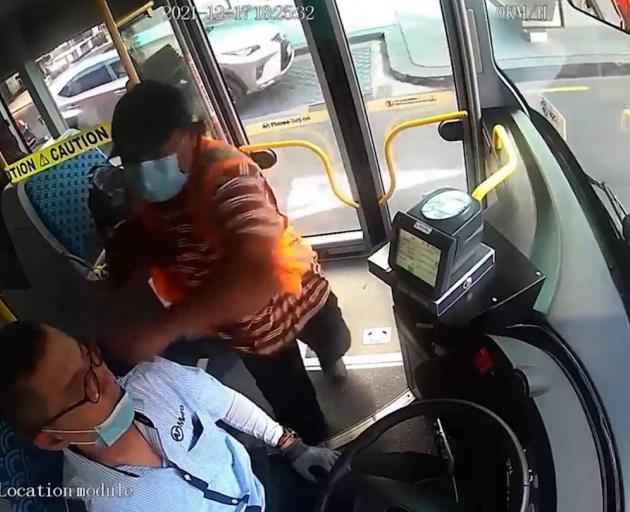 "There should be more training and making sure drivers understand what they can and can't do in situations like this."

NZ Bus has "condemned" the passenger's actions, saying there is no excuse for assaulting its staff.

The footage shows a man in a hi-vis vest boarding the bus and scanning on with his hop card. Before the man takes his seat the driver pulls out, causing the passenger to lose his balance and hit his elbow.

The passenger then uses expletives before approaching the driver and punching him hard in the head.

The dazed driver stops the bus, then gets out of his seat and follows the passenger down the aisle. He grabs the top of two seats and swings his body towards the passenger, kicking him in the back with both feet.

An altercation then takes place between the two men in the aisle, with the passenger taking another swing at the driver which fails to connect.

Alarmed passengers watch the action unfold, with one man saying: "Call the police at once."

The passenger uses more expletives before pushing the emergency button and exiting the bus.

The bus driver, who received medical attention at hospital after the attack, has been off work on ACC but is preparing to return to work.

A police spokesman said officers had made inquiries into the alleged assault.

"Despite obtaining CCTV footage police have, as yet, been unable to identify the offender.

"Police have also been advised by the complainant that they do not wish to proceed further with the matter.

"The complainant's wishes have been taken into account and police have filed the matter, pending any further relevant information."

"There is no excuse for the physical assault of our staff. Similarly, NZ Bus does not condone any of our staff assaulting anyone else."

Zmijewski​ said the company did not comment on employment matters. It had been advised by police that following an investigation, they would not be taking further action against either party.

"NZ Bus takes the safety of our drivers, including the prevention of assaults very seriously. In this regard, we have procedures that drivers are required to follow in order to de-escalate a situation and reduce the likelihood of an assault occurring.

"These procedures have been well communicated and are supported by the Unions. We also conduct targeted de-escalation training."

Someone can call the police at once, others can assist the driver.