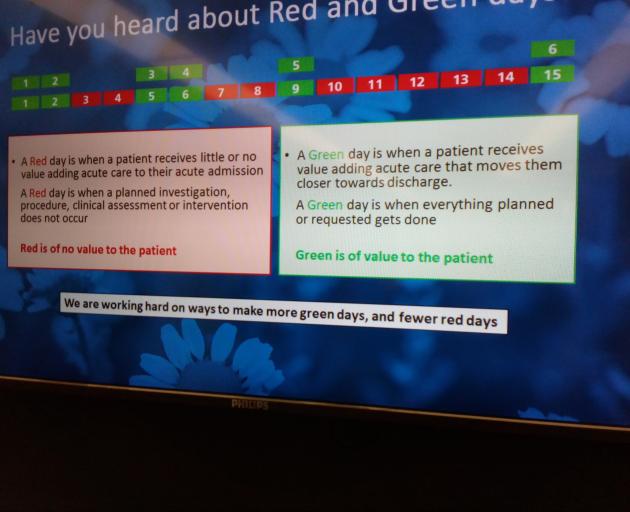 Neville Idour (76) was unimpressed by the green/red day promotion he spotted on a television screen at Dunedin Hospital last week.

Mr Idour did not see the point.

"To me, it’s just telling us we have a rubbish health system.

"Why don’t they just spend money on getting more staff?

"You wouldn’t want to have a heart attack on a red day," Mr Idour said.

Chief nursing and midwifery officer Jane Wilson said the board wanted to know more about care delays to improve things for patients.

The image photographed by Mr Idour showed no real data, but the board has started counting green and red days in its oncology ward.

Strategy, primary, and community nursing director Sally O’Connor said there had been some red days, "which is what we’d expect".

"This is about us understanding what some of our problems are and using it to improve things for our patients," Mrs O’Connor said.

It would be introduced to another couple of wards soon.

The concept was devised in Britain’s National Health Service, and there was little cost to the Southern District Health Board.

The screen also showed other information and had not been installed  for the project.

We do not have a 'rubbish' health system. We have a rubbish Ministry. A public display board is nothing to get exercised over. Come a green day, give the stretched staff a clap.