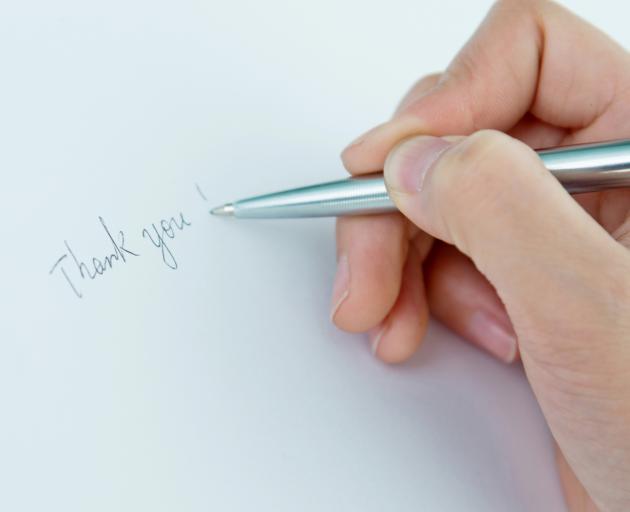 Photo: Getty Images
On Monday night, I received a curious letter. One might say it was a letter from beyond the grave.

You see, a few months earlier, my grandfather's cousin - Uncle Ken - read an article about me in the ODT and realised that we were related. He then sat down and painstakingly wrote - in shaky handwriting - a beautiful, encouraging letter to me, detailing his hopes for my future.

Being rather scatterbrained and messy, I promptly lost the envelope.

It took me about a month to find his address and reply with a scrambled, sincere apology for the delay.

Then followed a stretch of silence, and I learned that my Uncle Ken had died from cancer. I had never met him in person, yet through our letters, we had formed a tangible bond of paper, ink, honesty and encouragement.

Reading his final letter to me, written only a week before he died, was a surreal experience, simultaneously upsetting and comforting.

I probably communicate directly with at least 30 people online every day, through Snapchat, Instagram, Facetime, Facebook messenger, SMS and Twitter. With the technology available at my fingertips, why would I ever need to put pen to paper?

But I find myself mourning the lost art of letter writing.

Unlike an email, a text message or a voicemail, a letter is a tangible piece of communication. It can be re-read, smelt, burned or stored away.

I miss the thrill and anticipation of waiting by the letterbox, as I did as a child, desperate for the postman to bring me a letter from my penpal in Singapore.

To me, letter writing is an incredibly personal and intimate activity. It shows I actually care enough to sit down and create something that will travel across the country, through machines and hands, into the mailbox of a loved one.

I'd like to think that I choose my words carefully, assembling words on the page with precision.

I must admit, I also find letter-writing incredibly therapeutic, almost like keeping a journal.

There is a suitcase in my basement, full to the brim with letters, cards and colourful drawings from my brothers and sisters. I can't bring myself to throw out even one dog-eared letter, even as I move around the country, carting the suitcase hither and thither.

Every so often, I unzip the case and sift through the colourful, ratty sheets of paper until I find something written by my brother John. I can almost hear his lisp in the messy, slanted cursive writing and awkward phrasing. I can't help but feel sad when I reread his letters - they're proof that he once was alive and wrote to me about possum hunting and rugby.

As Catherine Field wrote for The New York Times, ''A good handwritten letter is a creative act, and not just because it is a visual and tactile pleasure. It is a deliberate act of exposure, a form of vulnerability, because handwriting opens a window on the soul in a way that cyber communication can never do. You savour their arrival and later take care to place them in a box for safe keeping.''

So here's my challenge to you: put down the laptop. Discard any thoughts of autocorrect or instant messaging. Pull up a fresh, crisp piece of paper and let your thoughts unravel.

Experience the thrill and permanence of putting ink to paper, and let someone know you care.

A word processor with fancy font can be used to replace handwriting that has become illegible. If it is printed onto paper and sent in the post it can be therapeutic as well. Sometimes e-mail composing can be pressurising if done while internet is running.

You are quite right. The medium is not the message. There is a cohort solidarity, however, in the lost art of calligraphy and cursive.