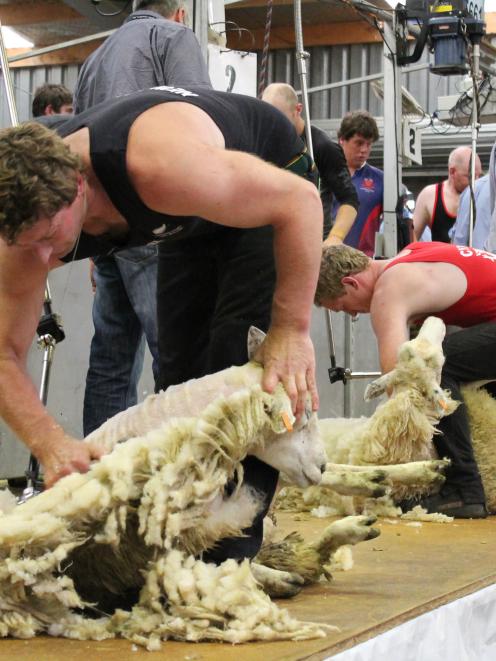 Showing his form in last year's test against Wales is shearer Tony Coster (left), of Rakaia, who is again competing against Wales alongside David Fagan this summer. Photo from the Allied Press files.
Central South Island shearers have featured prominently in this year's first competition.

Tony Coster, of Rakaia, won the Open Final at the Duvauchelle Show on January 10.

That was despite his wife, Sheryl, revealing he had not done any shearing in the preceding few weeks, Shearing Sports New Zealand media officer Doug Laing said.

Coster was named a Master Shearer by Shearing Sports New Zealand last year, acknowledging his achievements in more than 25 seasons in the industry.

He had been the New Zealand national circuit champion three times, but it was his first win at Duvauchelle, Mr Laing said.

Before Christmas, Coster won four finals and was runner-up to Irish shearer Ivan Scott in the New Zealand Corriedale Championship at the Canterbury A&P Show in November.

Fellow Master Shearer and Rakaia resident Grant Smith was the fastest finisher in the Duvauchelle open final, 20 seconds clear of the field.

But Coster's quality earned him the victory by three and a-half points from Rangiora's Mark Herlihy, pushing Smith back to third.

The two-man senior competition was won by David Jackson, of Sefton, while Canterbury Show winners Hugh De Lacy, of Fernside, near Rangiora, and Emily Te Kapa, of Scotland, won the intermediate and junior finals respectively.

The competition takes place at the 50th anniversary Southern Shears in Gore on February 21 and the Pahiatua Shears on March 1.

Mr Laing said it was likely to be Fagan's swansong in the black singlet. Now aged 53, Fagan first represented his country against a world selection including his older brother John at the Golden Shears in Masterton in 1985.

He had participated in 19 transtasman matches in New Zealand and more than 100 matches against teams from Britain in New Zealand, England, Scotland, Wales, Ireland and Northern Ireland.

Fagan had also been a national representative at nine world championships, winning at least one title at all except the championships in Toowoomba in 2005, Mr Laing said.

His open class career record of 630 wins was about three times as many as the world's next most successful shearers.

Fagan has said he would continue while he was still competitive, and planned to shear at shows throughout New Zealand, at least through the rest of the season.