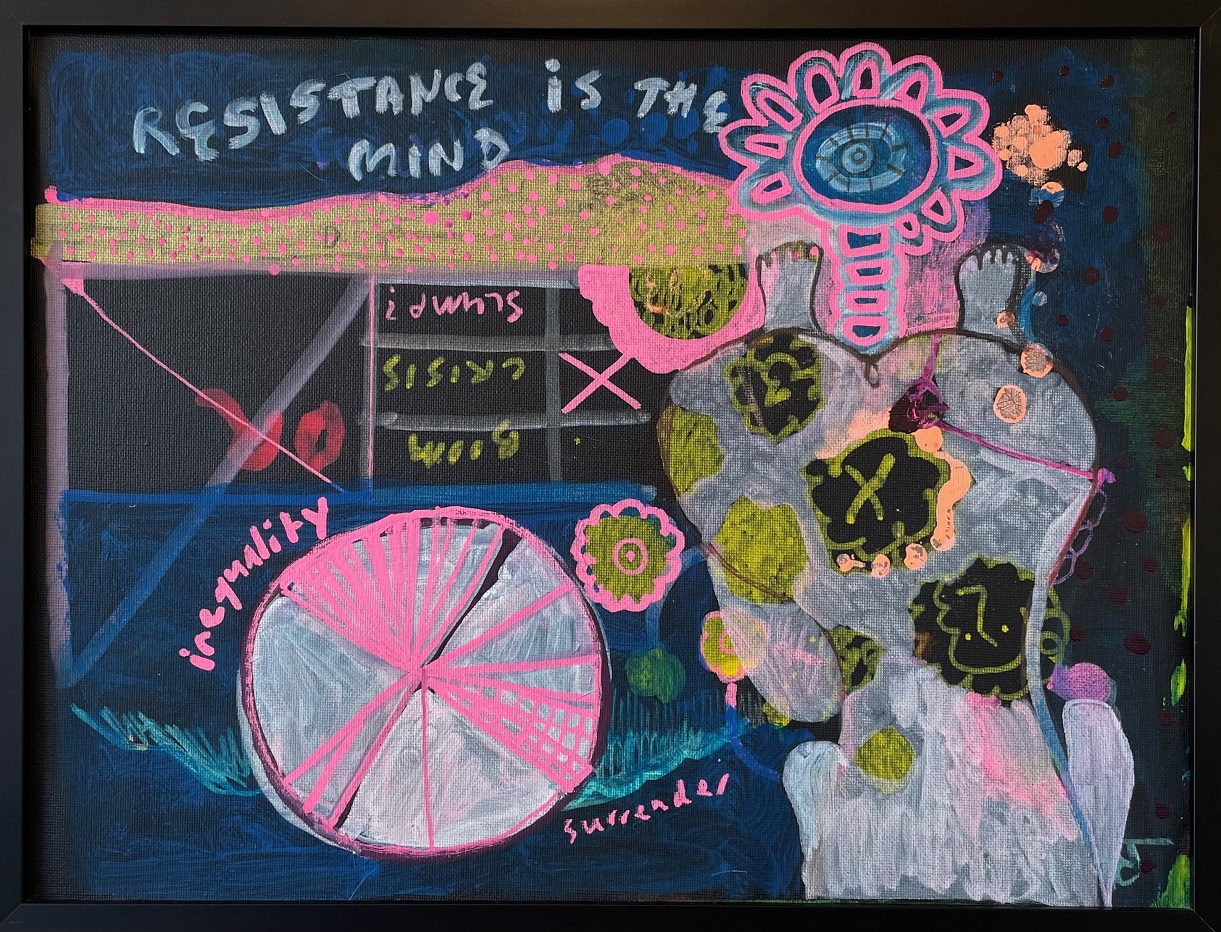 "Selected Works" offers an opportunity to view, or revisit works by a group of artists who exhibit with RDS Gallery. The artists included in this exhibition are Felix Harris, Clive Humphreys, Valerie Hammond, Peter Cleverley, Kate Fitzharris, and Esther Bosshard. With the exception of Hammond, the artists are either born or based in Aotearoa — or indeed in Otago (Cleverley, Fitzharris, Bosshard). While two small oil paintings by Bosshard pinpoint Dunedin Harbour by title, and the blue of Cleverley’s works readily evokes the light and sea colour of the Kakanui coast, the exhibition as a whole travels beyond specific locations and unified states of being. In particular, the works of Harris and Hammond traverse disparate psychological conditions and physical typologies.

Harris’ paintings convey both ennui at the inequality of contemporary life and hope for reparation through the combination of abstract geometric shapes, symbols, slogans, and naive-style depictions of plant life and architectural structures. With bright colours against a typically black background and oft-repeated mantras ("freedom from guilt"), Harris toys with the tension between reality and aspiration.

Across the gallery from Harris’ four paintings, two works very different in style by Hammond are relatedly invested in transformation, in-between states, and metamorphosis. Harpy III (2019), a black and white figurative work on paper (aquatint, watercolour), depicts the head of a girl on the body of a bird — with both beings individually holding specific emotional resonances for the artist.

The stylistic and formal differences between all the exhibition’s works are its strength. 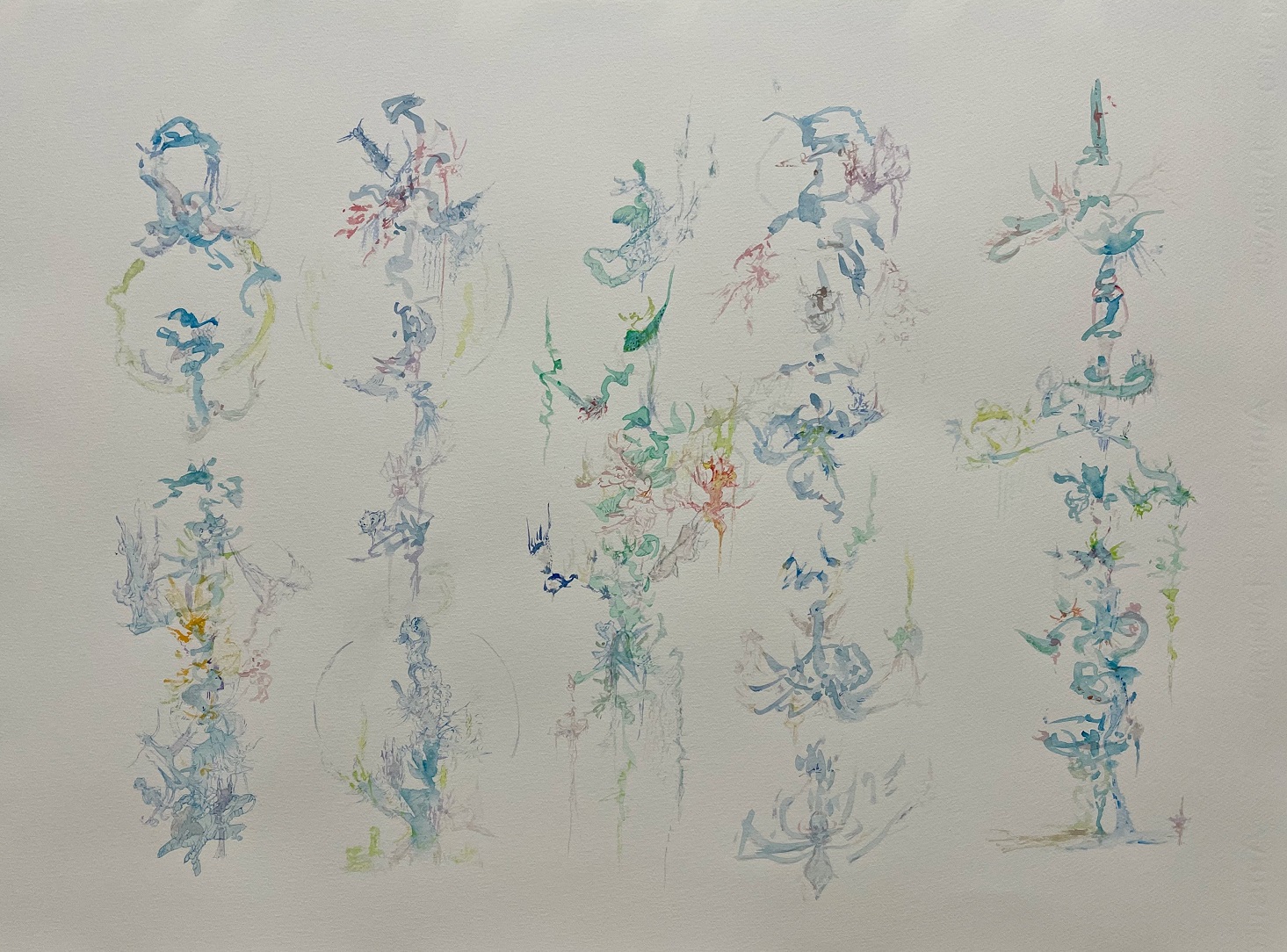 "New Drawings" is a significant new body of work by Dunedin-based artist Motoko Kikkawa. All of the watercolour and ink drawings were created during 2021 and are conceptually founded on the resonances between (especially calligraphic) kanji and drawing. Kanji are the complex ideograms or characters of the Japanese language that were borrowed and adapted from Chinese. Many of these ideograms are visual mnemonics: they visually resemble the object they name. For example, the character for rain is composed of two vertical bars comprising three short horizontal dashes (raindrops) beneath a longer horizontal line (sky). However, while the formal composition of Kikkawa’s drawings may at times allude to rows of vertical kanji sentences and even occasionally a kanji character, Kikkawa is more invested in freeform interpretations between writing and drawing than direct translation from a recognisable source character.

Within the calligraphic-like constellations the artist has facilitated a conversation between form and viewer in which it is possible to project, decipher, or actually see an unexpected face, animal, or person.

Kikkawa’s deployment of such small figurative beings are, however, spare and considered, which prevents the practice from performance or gimmick.

Despite the artist’s restraint, the viewer who spends time with the work can find it difficult to resist the human trait — documented by neuroscientists — to seek and find patterns in unexpected places. 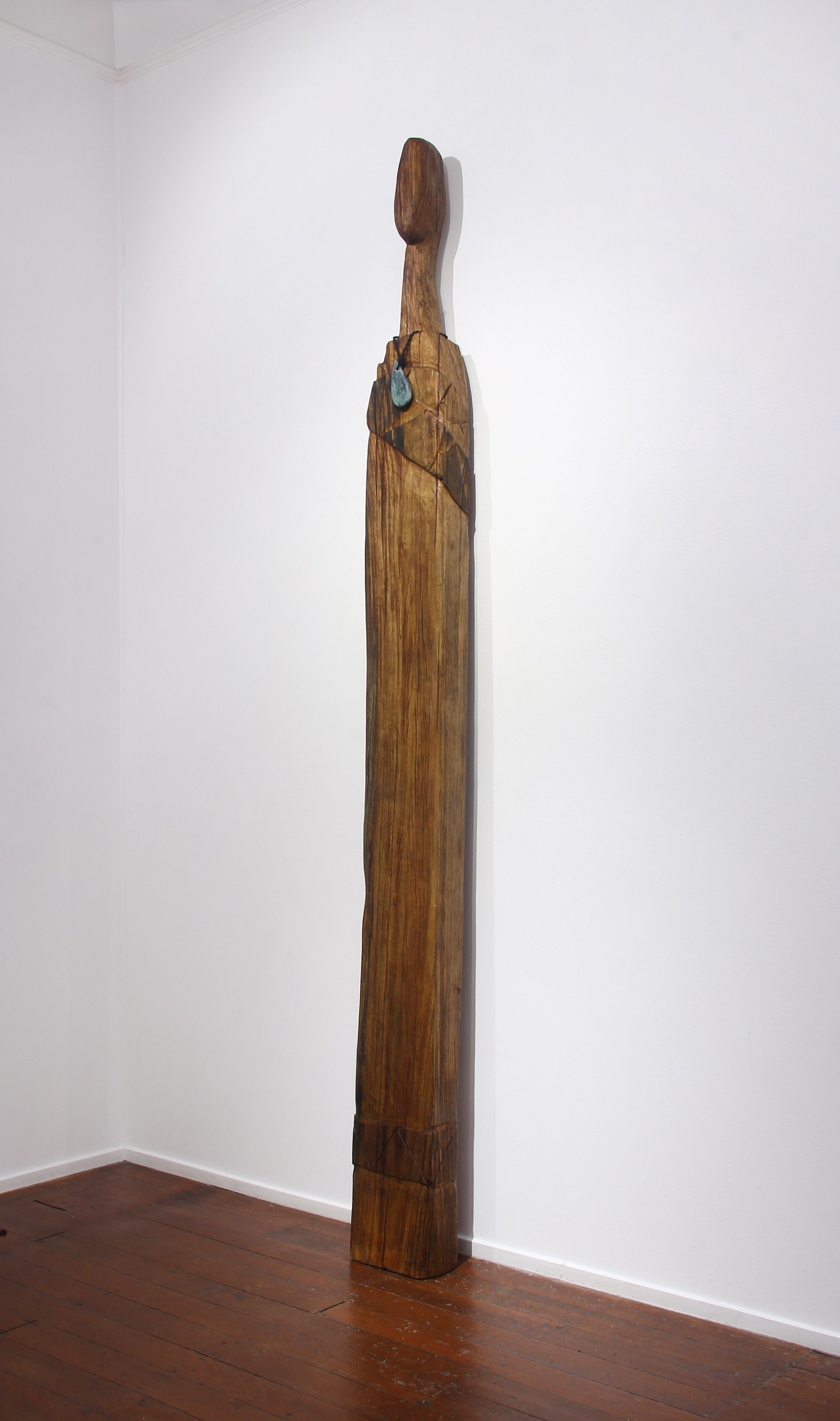 Comprising sculpture, painting and ceramics, Studio 18D is a group exhibition of primarily established artists including: Neil Adcock, Anton Forde (Ngati Ruanui), Patrick Ferris, Kereama Taepa (Te Arawa, Te Ati Awa), Jenna Packer, Neil Dawson, and Leanne Morrison. Forde’s large, wooden, pou (post) sculptures, each wearing a pounamu necklace, greet the visitor on the right-hand side of the gallery, while two further guardian figures (all from the Whakaruru / Protector series, 2022) on the left side of the gallery guide the visitor into another space. The right-hand grouping of guardians stands in potential spatial and narrative relationships with Morrison’s large-scale, geometric paintings of red, orange, and black diagonal stripes. Although geometric in form, the paintings nevertheless suggest a landscape, or even the earth itself when positioned in proximity to Forde’s Whakaruru / Protector figures. Complementing this interaction, Forde’s pou on the left side stand in relation to Ferris’ ceramic vessels on staggered plinths, suggesting a sympathetic connection between guardian (pou) and sustenance (potentially stored in the vessels).

This combination is perhaps fitting given the extractive actions of (especially colonialist and capitalist) humankind towards the earth interrogated in Packer’s four paintings (2021–22): sustenance is required for the examination. Dawson’s large wall-based sculptures of feathers from non-native birds could be interpreted, in this context, as having fallen from conflict, while Taepa’s (also wall-based) mask-like sculptures resembling carved, wooden faces bear witness or hold colonisers to account. Adcock’s stone sculptures of intentionally schematic human figures echo, in a different register, Forde’s pou.