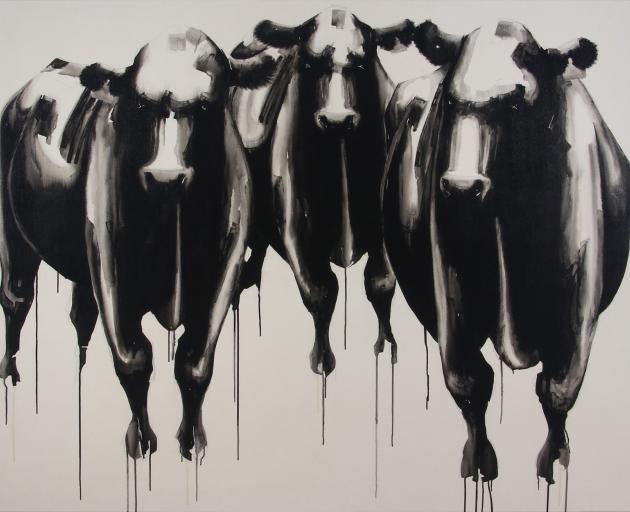 With a challenging, accusing gaze, the cattle in Mike Petre's ''Field Study'' series stare out of their picture planes, daring their human audience to look away, to distance themselves from the fate to which the animals are condemned.

The paintings are particularly effective when hung together, as wherever the viewer turns, they are confronted with yet another group of shadowy figures. Pastoral scenes are often depicted with cosy nostalgia, building on the idea of the idyllic countryside, but here the atmosphere is almost claustrophobic.

The cattle gather around with a presence both enigmatic and menacing; there seems to be no escape, no control over what might happen next, which reflects the ultimate end for the animals themselves. They, too, are trapped, at another's mercy.

Petre uses heavy washes of ink and a clever handling of negative space to create bulky, forceful bodies. Their limbs trail into thin lines, long drips of ink that roll down the canvas like blood, a visceral reminder of a brutal reality.

Despite that insubstantiality of form, and their inherent vulnerability, the cattle dominate the room, standing with dignity and majesty. The lives of their real-life counterparts might depend on human decisions, but here, in this gallery space, they have power.

''The Arrow'' exhibition at Milford Galleries Queenstown is an opportunity to see works from major names in New Zealand's art history.

Some pieces have newly arrived from various studios; others, such as Jeffrey Harris' White Painting of 1988, showcase the development of a style over decades. Harris' Head with Earrings alone represents 16 years of work and changing vision for the artist.

Although the sculptural works shine in this show, the paintings are exceptional. Garry Currin's remarkable Late Fragment perfectly captures the different facets and effects of light, as it glows in the sky, shimmers in water and glides across the land, altering the appearance of the terrain.

Even a photograph would struggle to convey imagery that so powerfully awakens the senses and tugs at individual memory of similar scenes. Michael Hight continues to impress with his incredible attention to detail; literally every branch and blade of grass in his river landscapes is a brushstroke of care and deliberation.

The clean, geometric lines of John Parker's glazed ceramic vessels are an effective contrast with Katherine Smyth's whimsical, fun, fruit-inspired earthenware, and once you step in front of Israel Birch's work, be prepared to stand there for a while - the layers of lacquer and stainless steel create patterns that move with the light and appear to extend endlessly beyond the surface plane, to almost hypnotic effect.

With beautiful curving lines that accentuate the heavy solidity of their form, Simon King's wooden Vessels are the perfect blend of function and artistry.

Exploring the relationship between shape, texture, colour and pattern, King situates the bowls in front of collage panels that seem a natural extension of the woodwork, both tonally and thematically.

He incorporates the literal definition of the vessels as working containers, and the more spiritual connotation of a vessel as possessing metaphorical qualities like grace.

Some of the bowls in the collection are left as natural polished woodgrain, with a very impressive set of 13 bowls all having been carved from one storm-damaged tree. Others are painted in earthy shades of gold, ochre, black, red and white, strikingly reflected in the mixed-media collages beyond.

Using layers in the collages, which include translucent butter paper printed with a woodgrain pattern, overlaid with washes of paint, King cleverly builds a repeating pattern of bowls and vases, in which edges blur and the composition takes on a very three-dimensional effect.

The wooden bowls on the tables in front seem to have sprung to concrete form from the multiple mirrored reflections in the collage panels. King skilfully executes each media, and has an eye for the full visual impact of the combined collections.