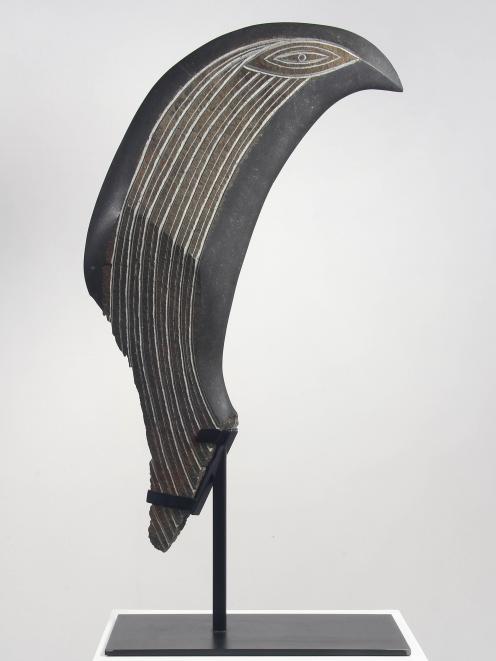 APTLY named, the call or song of birds can almost be heard emanating from the opening in the raised beak of Birdsong (2020), a large, sensuously modelled bird form carved from Coromandel stone that rises from its hewn, striated base to a pared-back, polished neck and beak. Large Bird Form (2020) is a similarly minimalist sculpture that combines polished and intentionally unworked surfaces, a combination prevalent in many of Chris Charteris’ work that invites the medium to speak alongside the sculptor.

In contrast to the minimalist figures, Charteris also creates stylised representations of bird forms in what could be described as a "rock art" style: the bird, though incised on a flat plane of stone has a flatter, two-dimensional quality. These sculptures are equally powerful, especially Kaitiaki (2018), which, as the guardian, becomes a condensed symbolic bird form comprised almost entirely of beak and eye. The white, sinuous, striated lines flowing from the elliptical eye to the rough edges at the base serve to strengthen the deliberate archetypical characteristics of birds: beak and neck. The mapping of beak on to neck or neck on to beak manages to capture the ur quality of this guardian bird.

If bird call can emanate from a raised beak, or even the shape of a beak, it can also flow through the eyes of two, large, sculptural needle forms, and of course from Singing Kohatu (2020): a carving of sound.

"I have come and joined my love with yours", Aliyah Winter and Nathaniel Gordon-Stables.

DESPITE its brevity (3 minutes 10 seconds), the collaborative video work by Aliyah Winter and Nathaniel Gordon-Stables (Ngati Kuri) titled I have come and joined my love with yours warrants multiple viewings to gain a sense of what transpires in this short dialogue between two individuals. However, given that this work is based on a translation, and uses the translated source text as a departure, there is a certain slipperiness that ultimately feels intentionally resistant to one single or final interpretation.

The text that Winter and Gordon-Stables (both based in Te Whanganui-a-Tara/Wellington) founded this work on is a conversation translated from te reo Maori to English that took place between Governor George Grey and Wiremu “Wi” Tako Ngatata (Te Ati Awa, Ngati Ruanui) on October 9, 1862, at a time when tensions within the Kingitanga movement in Waikanae (north of Wellington) were building.

The scene enacted between Grey (Winter) and Ngatata (Gordon-Stables) begins with a bare forearm of each speaker positioned side by side on a grey blanket. The pacing is quiet, deliberate: alternating between profile shots of the two speakers and the simple (yet potent) garments of each: a blanket-type garment for Ngatata and a white shirt for Grey. Despite the tension that builds between the two as they discuss processes of colonisation and resistance, the word "love" is used freely: demonstrating by its somewhat unexpected presence what has been lost via translation and colonisation.

METIRIA TUREI’S current exhibition Hiwa centres on Hiwa-i-te-Rangi, the ninth and final star in the Matariki constellation. Hiwa assists people with their aspirations for the coming year, and in 2020, she, along with the other eight stars will rise and be visible from July 13-20.

Turei has manifested Hiwa in three forms: dawn, day and dusk across two different media: pigment print photography and large-scale textile installation. As dawn, Hiwa is Hiwa Pou, and the pou or post is represented by Hiwa’s elongated legs; as day, Hiwa is Hiwa Taniwha, and a yellowy-green, serpentine taniwha replaces her legs; as dusk, Hiwa is Hiwa Waharoa, and in this form her legs have become the waharoa or gateway. In the pigment prints, Hiwa is depicted in rich, saturated colours, but as 3m sculptural forms, Hiwa is apprehended in terms of scale, presence, and movement. She is at once monumental and diaphanous: the chiffon responding to air currents and touch.

Hiwa is not only a cosmological harbinger of Matariki, she, and this exhibition give voice to an aesthetic and political movement known as Indigenous Futurism, in which Te Ao Maori is the centre, and has agency. Drawing inspiration from African American Futurism, Indigenous Futurism is related to the politics and processes of decolonisation, but envisages a world in which indigenous peoples (in this instance Maori) can imagine their own future with self-determination.