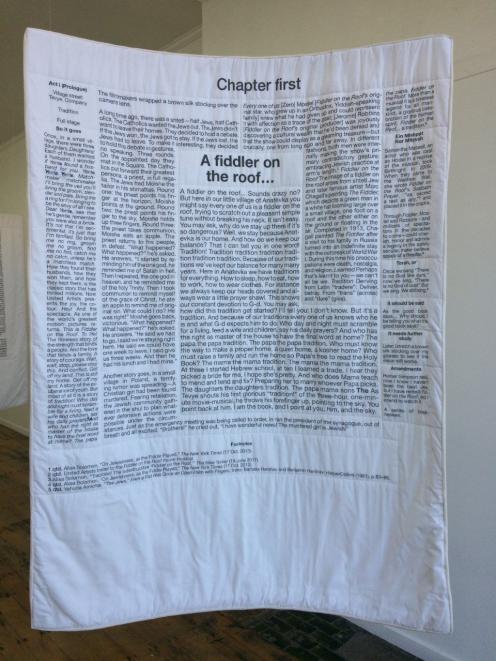 Exhibitions that tackle the complexities of historical and contemporary Jewish culture are rare in Aotearoa, so New Zealand-born Jewish writer and artist Casey Larkin Mazer Carsel's exhibition at Blue Oyster is welcome and intriguing.

Carsel's conceptual entry point for exploring Jewish culture is the 1964 musical Fiddler on the Roof, which Carsel describes as ''the struggle between tradition and modernity''.

Carsel's exploration of this struggle in a Jewish context takes the form of a text-based installation comprising six large, quilt-like pages that hang in staggered formation from the window to the rear of the front gallery space. That is, excerpts of texts written by Carsel are printed on the large white, lightly padded, cotton ''pages''.

Each quilt-like page is headed up with ''Chapter'' and followed by a number, such as ''Chapter first'', ''Chapter seventh'', and ''Chapter twenty-fifth'', to list the first three.

Over the six pages, Carsel's exploration of Jewish culture includes a range of diverse yet interconnected references from Fiddler on the Roof and the Holocaust to Gwen Stefani's Rich Girl and Homer Simpson.

Carsel's deployment of the excerpt as an approach to a subject as vast as Jewish culture seems appropriate, and is evident in the episodic presentation of the pages (1, 7, 25, 27, 31, 40), and in the formatting of the text on the pages, which follows the presentation of The Talmud.

The eye is drawn to the central area called the Mishnah then darts around the surrounding textual passages. 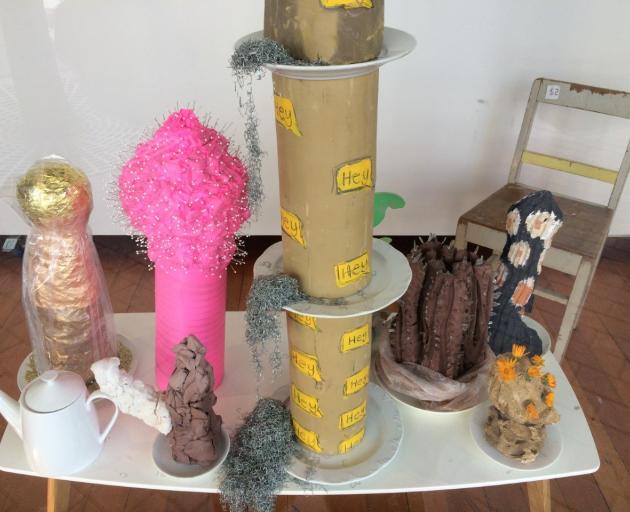 Each day a new art work by ceramic artist Philip Jarvis will be added to the window gallery space at Fringe HQ, in Princes St. At the time of writing there were nine ceramic works arranged on a low, white coffee table.

The table is getting crowded with ceramic objects, many of which do indeed evoke cacti. However, there is also an old, wooden school chair that may, in time, function as a support for future art works.

Perhaps the chair is also a reference to Stephen Dedalus' childhood as depicted in James Joyce's Portrait of the Artist as a Young Man (1916).

Jarvis' iteration of the title to Joyce's seminal text is deliciously irreverent, and cannot fail to prompt the viewer to search for connections or parallels between Jarvis' growing exhibition and Joyce's novel, however tongue-in-cheek the reference may be.

Is Jarvis' exhibition an evocation of Stephen Dedalus' prickly character, as he swings between youthful rebellion and familial, societal, and religious constraints in the formation of self? Is this array of erect art objects a take down of Dedalus' at times precious search to become a writer? Or did Jarvis sculpt cacti forms as a young man ...?

In true Jarvis style, the ceramic forms stretch from the earthy to neon spender, from the loosely realistic to the fantastically exuberant. This hybrid breed of cacti are prone to multiplication: stay alert. 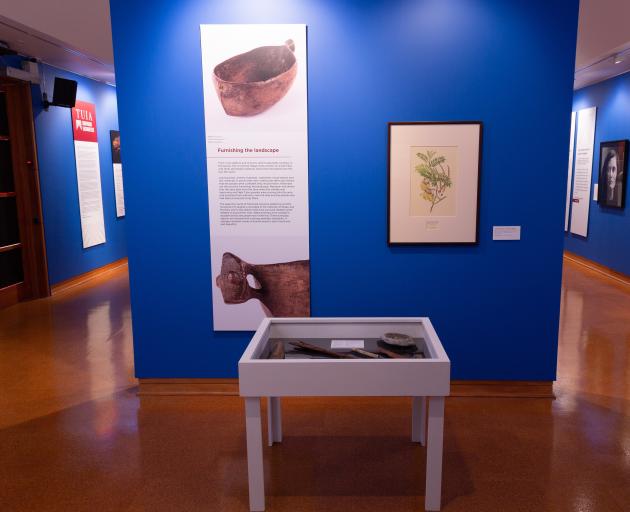 Two hundred and fifty years ago, on his first voyage to the South Pacific, James Cook made landfall and encountered tangata whenua of Aotearoa. A number of events including exhibitions are taking place this year to mark what is necessarily a problematic encounter.

''Tuia - Southern Encounters'' is one such exhibition that partakes in the national discourse surrounding contact and ongoing settler colonialism while simultaneously pointing out the limitations that can occur with the homogenisation of national commemorations.

The key limitation facing curator and Hocken librarian Sharon Dell is the absence of contact between Cook and local iwi in 1769. As Dell writes in a text accompanying the exhibition, ''I encountered a problem, because there was no encounter.'' Of course, that encounter occurred a few years later, in 1773, on Cook's second voyage.

Dell responds to the narrative of encounter by focusing on the 50 generations of Ngai Tahu Whanui (Waitaha, Ngati Mamoe, Ngai Tahu) who lived - and continue to live - in the Otakou region.

Given the historical emphasis ''Tuia - Southern Encounters'' is predominantly animated by traditional taonga including stories and prayers, a wide range of material artefacts from stone implements and fish hooks to kete. These taonga are accompanied by extensive wall texts.

Many of the taonga on display were presented as part of the Ngai Tahu claim (Te Kereme), which was settled in 1998. The exhibition also includes contemporary art works by Ngai Tahu Whanui artists including Fiona Pardington and Ayesha Green.