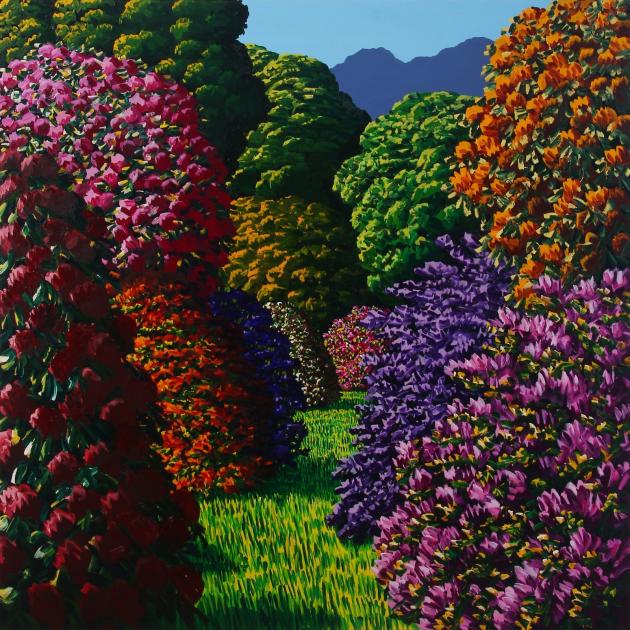 It is impossible to mistake a Karl Maughan painting for that of another artist. Barring an unexpected swerve into significantly different subject matter or a change in stylistic treatment, Maughan will be irrevocably associated with his large paintings of super-saturated, high-tone gardens with flowers in perpetual bloom. There is a tendency to frame Maughan’s painting style along a realistic-abstract continuum, as the floral shrubbery can encourage a focus on formal properties such as shape, compositional arrangement and discrete fields of colour. However, the subject matter is clearly identifiable as flower-studded shrubs and bushes. It is probably most accurate, as other commentators have observed, to concentrate on the psychological dimension of Maughan’s paintings as a means of parsing them.

Each floral garden scene is closely cropped, with the bushes of flowers arranged from smallest in the foreground to largest in the background. Even in such a relatively narrow depth of field, the background feels no further away than the foreground, which creates a flattened canvas where distance is difficult to gauge. This results in a mildly claustrophobic sensation that is nevertheless beguiling, but the narrow pathway leading seemingly nowhere adds to the unease.

It is tempting to interpret the heightened intensity of Maughan’s paintings through a slightly dystopian ecological lens, in which the synchronicity of budding and pollination may be threatened through global heating. 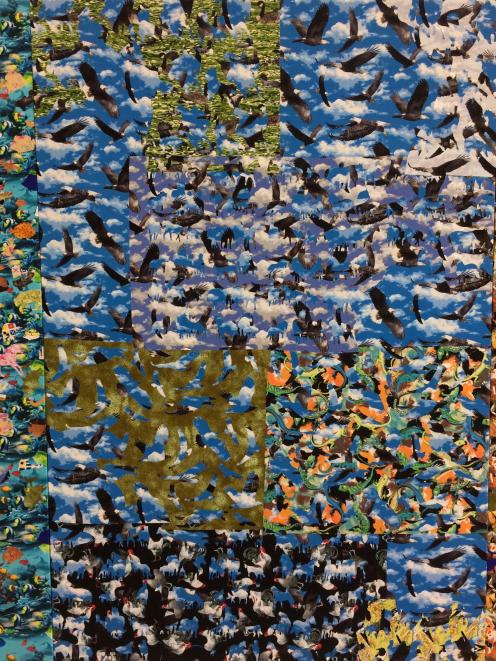 Yolunda Hickman's "Shoaling"exhibition comprises two interconnected bodies of work, which deploy a glitch aesthetic or rupture to comment on the ubiquity and clash of digital information. One body of work (Clearings, 2019-2020) conveys this rupture by layering up patterned quilting fabric to create panels of cotton applique. These panels, installed side-by-side, form a continuous work around the front gallery. By contrast, but also in conversation, small sculptural works (Flotsam, 2019-2020) — made from a range of found objects congealed into a round-cornered square with resin — are arranged on the floor of the back gallery. Both bodies of work employ images or objects from the natural world and that of kitschy material culture and, in formal terms, achieve the glitch or clash of imagery/objects through layering and juxtaposition.

One panel typical of Clearings in terms of subject matter and layering of fabric includes all-over patterning of eagles in flight against a blue sky, chickens and roosters, and reptiles. Hickman’s layering technique involves cutting out the actual patterned object itself (the positive image), and neatly cutting out around a section of objects (the negative image). In this panel, the negative image of horses are cut out of a cloud-patterned fabric and are layered over the eagle fabric, while the negative image of eagles are cut out of an abstract fabric and similarly superimposed over the eagle fabric. "Shoaling" mirrors the disjuncture of viewing a news site or social media feed.

All of my lovers are immigrants (smooth my pillow), by Ayesha Green

"Wrapped up in Clouds", Ayesha Green

Ayesha Green's "Wrapped up in Cloud" exhibition is directed towards decolonising early colonial narratives, the politics of naming land and flora as an act of possession (and recuperation), and recognising the rights of immigrants to seek asylum in a new land. Green (Ngati Kahungunu, Kai Tahu) addresses these issues through painting, text, and a combination of the two in a new and substantial body of work.

The series Dear Ayesha, love from Joseph (2020) consists of four large kokowai (red ochre earth) on stone paper works, which depict the reverse of a postcard "posthumously" addressed to the artist from colonial botanist Joseph Banks. Each postcard includes an excerpt from Banks’ diaries that Green has chosen to elucidate themes of the exhibition, such as naming as an act of possession, and a description of a mineral seam that treats whenua as a resource. Elements of these themes are carried through into other works: a large-scale painting of botanical specimens with taxonomical names (variously Latin, English and te reo) and kupu/words etched into clay speech bubbles.

In the largest work, a diptych titled All of my lovers are immigrants (smooth my pillow) (2020), Green’s earlier practice of painting portraits of friends or lovers and botanical flora as separate subjects has fused to combine human nature with floral nature. The two pairs of lovers lie in each other’s arms beneath a heavy, lush fabric field of flowers. 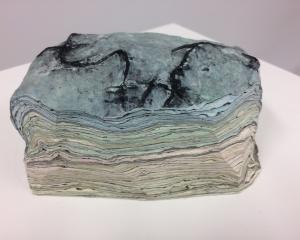 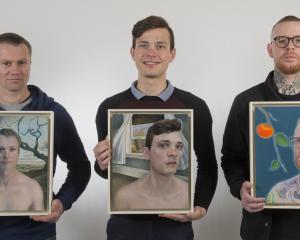