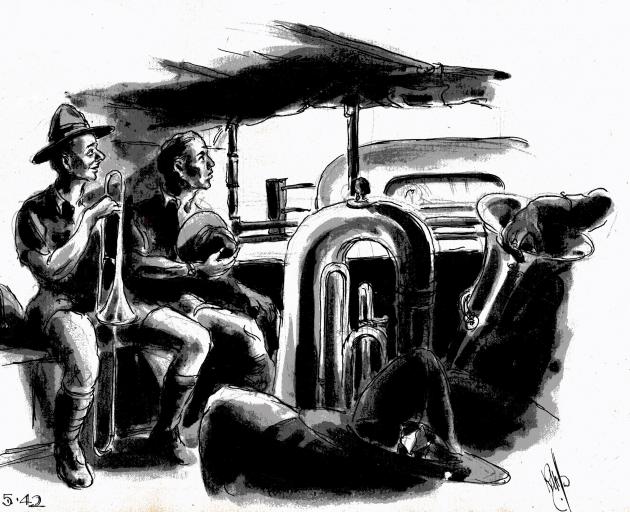 Band on the road, from one of Ralph Miller’s sketchbooks. Photo: Miller Family Archives

With the 75th anniversary of the Battle of Guadalcanal in the Solomon Islands commemorated in early August,  Gillian Vine  looks at how three Dunedin artists recorded the Pacific War.

Artists have recorded battlegrounds as long as wars have been fought.

For New Zealand, the practice of having official war artists began during World War 1, when three men were appointed to record the action, including George Edmund Butler, who lived in Dunedin from 1901 to 1905. 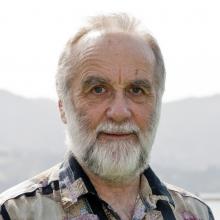 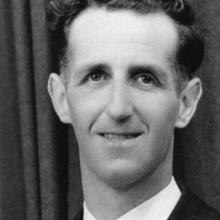 The Dunedin connection continued in World War 2, when Peter McIntyre was selected as New Zealand's official war artist in January 1941 to work in North Africa and Europe. Dunedin-born and educated, his portrayals were supplemented by paintings and drawings by numerous amateurs, including city printer John L. McIndoe, who recorded his experiences in a POW camp in Germany, after being captured in Crete in 1941.

Dunedin links were to the fore in the Pacific, too, with the appointment of Russell Clark (1905-66), one of the army's two official war artists, and

R. Maurice Conly (1920-95), who was to serve as Royal New Zealand Air Force artist for 54 years and rise to the rank of Wing Commander.

Their contributions - and that of Dunedin's most notable unofficial recorder in the Pacific, Ralph Miller - are of inestimable value in gaining an appreciation of tropical warfare.

Forget liaisons with dusky maidens under palm trees - the paintings by Conly, Clark and Miller showed bare airfields or muddy jungles where Japanese snipers lurked while air and sea battles were waged offshore.

For the three Dunedin artists, though, the Pacific War was to give them opportunities to develop in ways unlikely to have arisen in peacetime, when each earned his living in the commercial printing sphere. 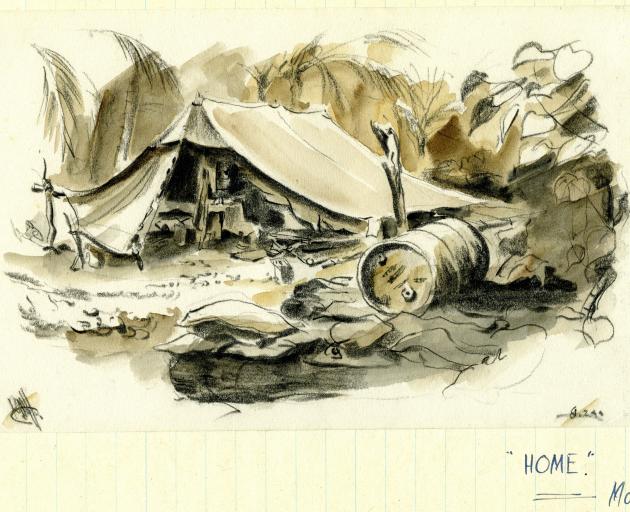 Ralph Miller was born in 1918 into the family of a well-established Dunedin commercial design business, Miller Studios. Educated at Albany Street Primary School and Otago Boys' High School, he joined the family firm as a signwriting apprentice. During the 1930s, he attended art classes in the evenings, with tuition from R. N. Field, Gordon Tovey and A. H. O'Keeffe, the latter also a tutor of McIntyre.

Ralph Miller was, like his brother Roy, a talented musician, a member of the St Kilda Brass Band. In 1939, Ralph had been runner-up in the national baritone horn contest, so in March 1940, when he went to do his basic training at Burnham, he was immediately placed in the camp band. (Trombonist Roy was to serve in the RNZAF band during the war.)

At Burnham, Miller had free time to fill sketchbooks with pen or pen-and-ink portrayals. At first, he mainly drew people, albeit in a slightly stilted style that was to loosen as he put into practice some of what he had learned in Dunedin, although body proportions were initially a challenge. ''Beginning to get hold of muscles,'' he was to write in his diary while in the Pacific.

In November 1940, as a member of the 30-strong 8th Brigade Group Band, Miller was sent to Fiji, based at Namaka Camp, site of the present Nadi airfield, playing there and at Lautoka, 27km away.

In a letter home in February 1941, he described at length the ''bit of excitement'' of a hurricane during band practice. ''We went once through Tchaikovsky,'' he wrote. ''You should have heard the realistic effects in the 1812, I bet no band has had it better.''

When the Americans took control of Fiji in June 1942, band members were sent home for leave and retraining before returning to the Pacific, initially to New Caledonia, then the most challenging posting, the Solomon Islands, arriving late in 1943.

To Miller, it must have seemed surreal, playing most nights in a band at the front line, shelled daily and coping with ''mud, mud, more mud and more hurricanes''. In one period of just over two months, the band travelled more than 3000km and gave 70 concerts, one of them with an audience of 7000.

''The band was route marching in the grit and heat, moving every few days,'' his son Brian Miller said.

His father was still drawing ''non-stop. He was very fast [and drew] with a funny little smile on his face.''

Artistically, Miller was pushing himself, developing his own style while being influenced by American Regionalist School. He found conte (graphite-clay pencils) ''a good medium for expressing himself'', Brian Miller said.

After more than five months of constant travelling and playing, the exhausted bandsmen returned to New Caledonia and then were homeward bound. 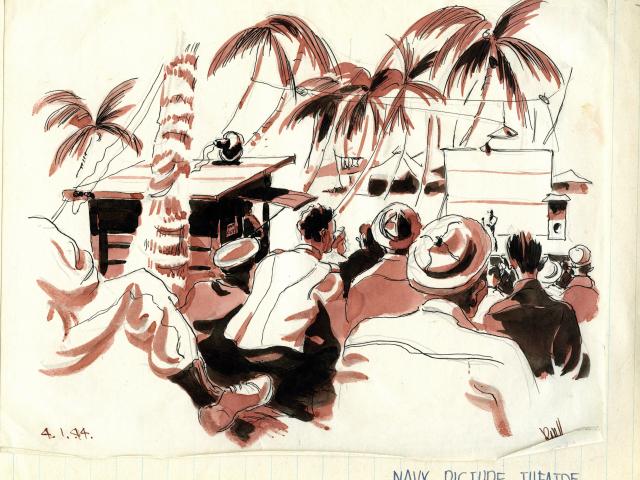 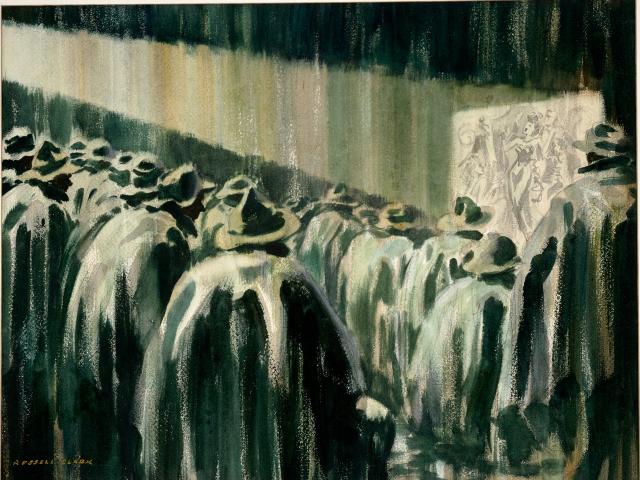 Movies in the rain, one of Russell Clark’s best-known paintings from the Solomon Islands. Photo: Archives NZ, AAAC 898 NCWA 58

About a month before Miller returned home in August 1944, Clark and Conly had arrived in the Solomon Islands, when the action was, as Dunedin veteran Dave Patrick said, ''more mopping up really''. Despite that, their paintings, especially Clark's, give a strong picture of the Pacific War.

Clark had come to Dunedin in 1929 to work for printing firm John McIndoe and was to remain in the city until 1938, when he moved to Wellington. Brian Miller says it is ''highly likely'' that his father attended some of the evening and weekend classes Clark ran, ''as there are many similarities between Clark's and the style Ralph was to develop''.

In a 1942 booklet about Clark, then Otago Daily Times editor John Moffett, a friend of the artist, wrote: ''To the making of the artist-craftsman, Dunedin contributed many experiences and opportunities.''

Moffett described Clark's ''vivid cosmorama which encircles the bar in a leading Dunedin hotel [The City as being] . . . testimony to the fact that the claims of art and commerce can be brilliantly reconciled'', while portraiture was another highly praised aspect of his work at the time.

From 1941, Clark lobbied to be appointed an official war artist. Instead, he was assigned to military sign-writing at home, but at the last minute given work illustrating books for soldiers. 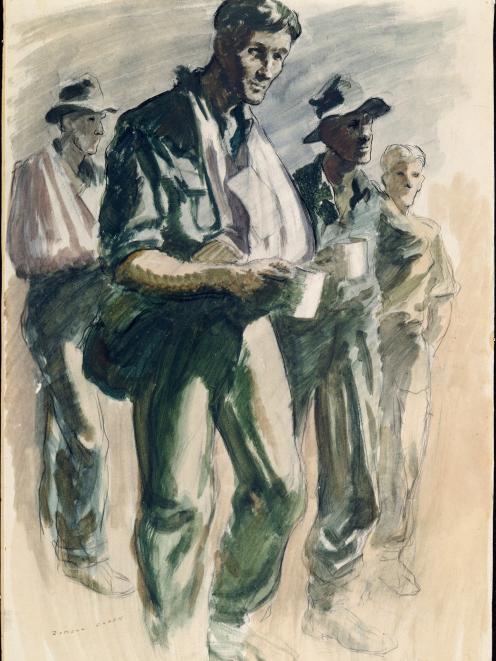 Instructed to tour New Zealand military bases and make paintings and drawings of camp life was a turning point. As Jennifer Haworth notes in The Art of War, these paintings, ''illustrate two themes that were to become an integral part of Clark's work in the Pacific: his interest in the common soldier, sailor and airman ... and the mechanisation needed to fight a modern war''. Most of his paintings were completed after his return to New Zealand by interviewing men who had been involved in the battles and his on-the-spot experience of the terrain gave Clark's works authenticity.

Two years younger than Miller, Conly had also attended OBHS and was a keen water-colourist who, in 1933, won a painting competition in which he beat his classmate Colin McCahon. Clark, with whom Conly was to develop a friendship in later years, presented the prize. On leaving school, Conly became a commercial artist, working for Dunedin company Coulls Somerville Wilkie until called up in February 1941.

War meant an outlet for his interest in aviation, partly the result of seeing aircraft, including Hudsons and Tiger Moths, at the Taieri aerodrome. He wanted to be a pilot but during a training flight in a Tiger Moth over the Taieri, Conly made a too-rapid descent, which ruptured his eardrums, ending any likelihood of becoming a pilot. However, the Air Force magazine Contact found a slot for him. His formal introduction to war art was in 1942, when he was assigned to recording aerodrome defences in northern New Zealand. His first overseas assignment was to the Solomon Islands in 1944, working alongside Clark.

Although all three recorded what was around them, Miller had none of the censorship restraints experienced by official artists. Conly, for example, was once told to add a row of palm trees to prevent enemy identifying an airfield's location. Clark seemed less prepared to work within the parameters laid down for official artists and did his own thing to such an extent that for several months during his Pacific stint, the army had no idea where he was. 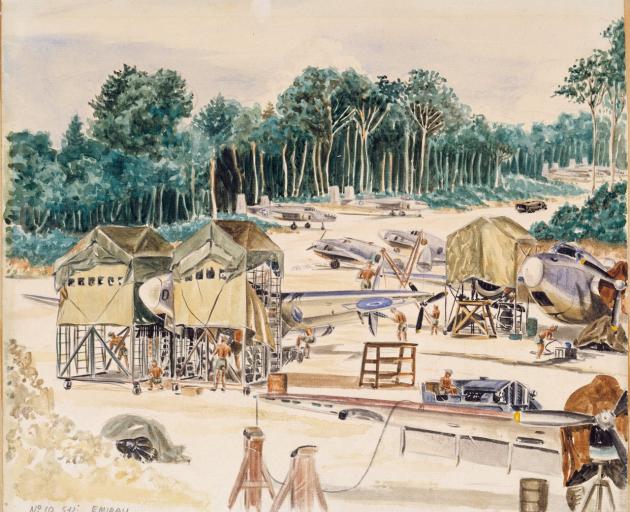 After the war, the three men returned to commercial art, Maurice Conly remaining on standby as a war artist. He went to Vietnam in 1969 to cover the army's actions, a posting that he said ''brought back vivid memories of the war in the Solomons''.

From 1955 until shortly before his death in 1995, Conly was New Zealand's principal stamp designer and also designed stamps for several Pacific nations. In another aspect of his art that demonstrates his flexibility, his was the $1 coin design.

Clark continued to work as an illustrator with NZ Listener and the NZ School Journal, then became a lecturer at the University of Canterbury School of Fine Arts. He also illustrated a number of books, including Hot Water Sailor, his friend Denis Glover's account of his wartime naval experiences in the northern hemisphere.

Miller, who had been in excellent health before the war, returned with hypertension and signs of an abnormal heartbeat but the army medical board passed him fit to work. That meant a return to long working days at Miller Studios until March 1956, when he died suddenly, possibly due to complications from an earlier bout of rheumatic fever.

He left a legacy of more than 1000 sketches and paintings, 500 of them from his Pacific years.

''When he died, Mum just put everything in boxes and they sat on top of the wardrobe for decades,'' Brian Miller said.

A number are reproduced in his biography, Moments in Time: Ralph Miller - Artist.

Miller's artistic potential was probably never fully realised but, as well as contemporary Dunedin scenes, his legacy is a record of a segment of the Pacific War that is almost forgotten. 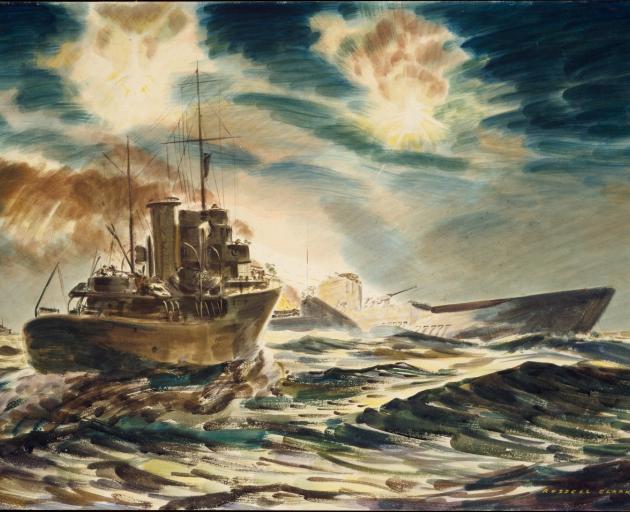