War in the Pacific no holiday 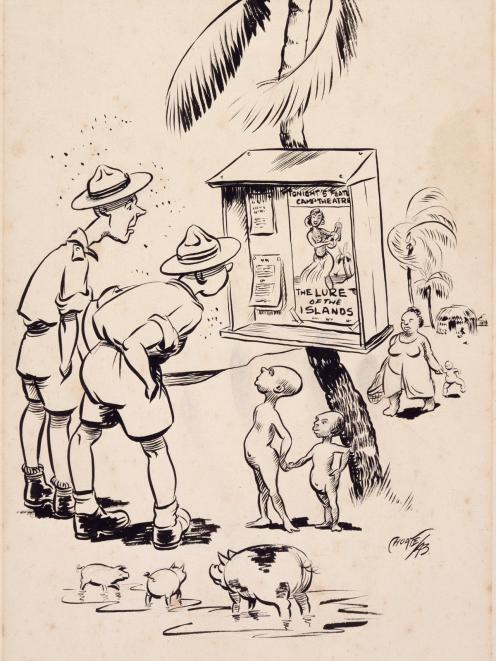 F. D. Choate’s 1943 pen-and-ink cartoon Lure of the islands satirised many people’s idea of the Pacific War. Photo: Archives NZ, AAAC 898 NCWA 280
When the Japanese bombed Pearl Harbour on December 7, 1941, New Zealanders realised the possibility of invasion was a very real one.

World War 2, until then a European conflict, was now on our doorstep and NZ's 3rd Battalion was to see action unlike anything experienced in the northern hemisphere.

''The mud around the fox-holes smells of sweat and [excrement] and death,'' one soldier wrote.

A decisive American success six months after Pearl Harbour saw the Japanese put plans to invade New Caledonia, Fiji and Samoa on hold but they still had strongholds in New Guinea and the Solomon Islands.

The bitter six-month battle for the main Solomon Island of Guadalcanal in 1942-43 and its Henderson Airfield was crucial to the Allies in the campaign to push back the Japanese and prevent them isolating Australia and New Zealand.

The Royal New Zealand Navy undertook escort and minesweeping duty. In 1943, the light cruiser Achilles was bombed by enemy aircraft, Leander was torpedoed and Moa sunk by a Japanese bomb. In all three actions, New Zealand men died.

When Henderson Field was taken, the air force operated out of it in the teeth of the considerable Japanese strength remaining in the area, with mechanics supplying support on the ground for planes and vehicles.

When the Americans took the strategically important island of Vella Lavella to the north of Guadalcanal, the New Zealanders were to have mopped up the handful of remaining Japanese. However, enemy strength was much greater than expected, the Japanese were skilled jungle fighters and 47 New Zealanders were killed.

October 27, 1943 was significant as the first opposed landing by New Zealand forces since Gallipoli. Supported by RNZAF and US fighter planes, New Zealand troops attacked the Treasury Islands of Mono and Stirling, losing 40 men. It was, New Zealand commander Major-general Harold Barrowclough said in the aftermath, one of the bloodiest scenes in his experience in two world wars.

Clashes continued in the weeks that followed, then the Kiwis took the Green Islands to the north of Bougainville.

New Zealand troops remained in the Solomon Islands until 1944, mopping up while fighting malaria, skin disease, the climate with its frequent downpours and the tedium of bases with no entertainment except a nightly movie supplied by the Americans.

In the Pacific campaign, 636 New Zealanders were killed and many others wounded. Yet despite that commitment, there was a perception that these brave, ill-equipped men had it easy.

Significantly, long after the war they were still referred to as ''coconut soldiers'', a concept summed up by Cantabrian F. D. Choate's 1943 cartoon and, later, American novelist James A. Mitchener's Tales of the South Pacific, on which the musical South Pacific) was based.

Unfortunately, the Bali Ha'i image distorted the reality of the Pacific War.