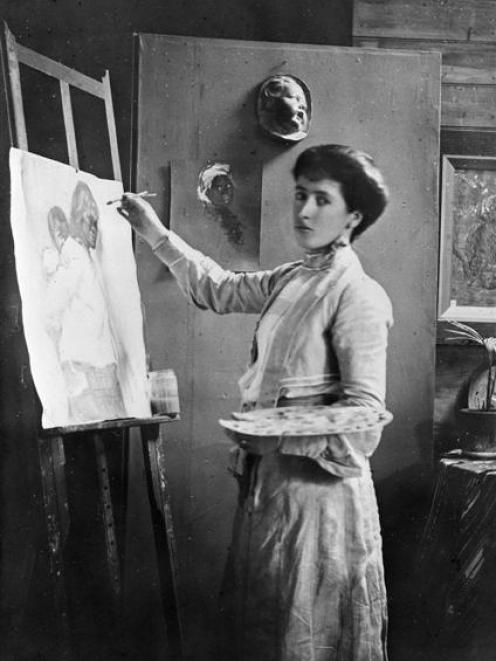 Frances Hodgkins paints at an easel in her Bowen St studio, c.1905. Photo from Alexander Turnbull Library.
The Dunedin Heritage Festival will feature a world premiere this weekend when the Southern Sinfonia performs Anthony Ritchie's A Portrait of Frances Hodgkins. Nigel Benson reports.


The life of Dunedin artist Frances Hodgkins will be painted in orchestral colours at a world premiere this weekend.

A Portrait of Frances Hodgkins, by Dunedin composer Anthony Ritchie, will be played by the Southern Sinfonia, conducted by Marc Taddei, on Saturday.

"The project was the brainchild of Marshall Seifert. It was his idea to have a musical dedication done for Frances Hodgkins.

"He'd had the idea for a number of years. It's been a really good project to be involved in," Ritchie says.

"There are four movements altogether. There's a prelude at the beginning and then three other movements, which represent the watercolours, oils and gouache she used.

I tried to bring in aspects of her painting through use of orchestral colours.

"There are also aspects of her life in it. She had a rather lonely life as a solo woman in Europe trying to make it.

There was a real determination to her and she had a quite extraordinary life.

"So, there's a mixture of emotions there which I've tried to capture in the music. In the end, I can't represent her art. It's my response to her work and her life."

The first half of the programme will feature a dramatic presentation by Rima Te Wiata of Hodgkins' life, from a script penned by University of Otago 2005-06 Robert Burns Fellow Catherine Chidgey, based on letters Hodgkins wrote from Europe to her mother at home in New Zealand.

Deborah Wai Kapohe and the City of Dunedin Choir will then perform arias and choruses from countries where Hodgkins lived and worked.

Art curator Jodie Dalgleish will also present a selection of some of Hodgkins' paintings.

The Southern Sinfonia-commissioned project follows several others combining music with other artforms: Sinfonia Antarctica in 1998, Southern Journeys in 2000, Timeless Land in 2004 and Equator - Circle of Life at the 2007 Dunedin Heritage Festival.

"This year's heritage festival theme of `arts and literature' was a perfect mix for us," Sinfonia manager Philippa Harris says.

"What the whole programme is doing is introducing Frances Hodgkins to the audience.

"The first half of the concert is Deborah [Wai Kapohe] and the choir singing songs and choral work from the countries and time in which Frances Hodgkins lived and worked.

They represent the artistic context Frances was working in, in countries like New Zealand, England, France and Spain."

"The second half will be the premiere of Anthony Ritchie's A Portrait of Frances Hodgkins."