Drawn to the land 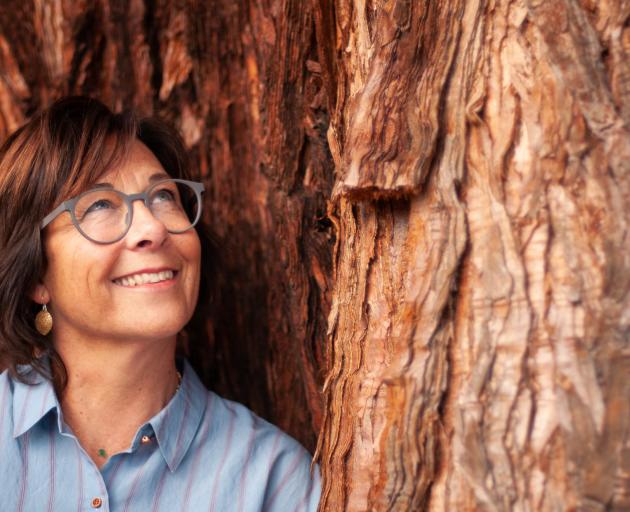 Looking out of a rescue helicopter window to the scenery below as bad weather began to roll in, the artist in Jenny Chisholm began to stir.

She started taking photographs captivated by the clouds and atmosphere below.

It was a diversion in an otherwise anxious day when her then 11-year-old son (he is 21 now) received a head knock on a ski field.

So when a photo reminder of the day popped up on her social media account, it triggered those memories.

"He was all right so I thought it would be OK to paint now."

The particular image she chose was of Lake Onslow, she called Gathering of Nature. 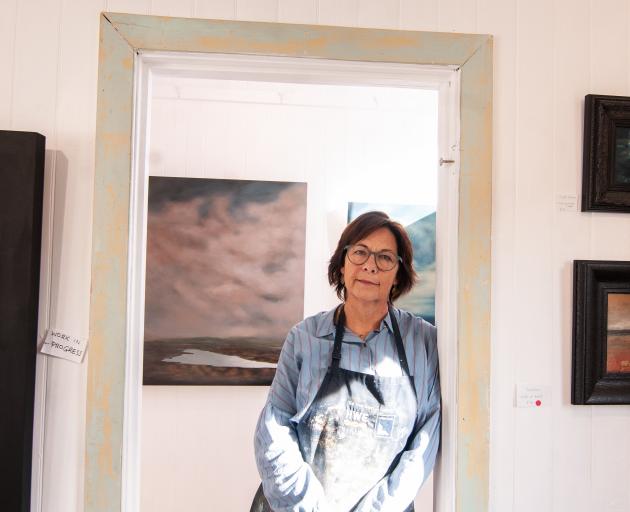 Jenny Chisholm exhibits at Star Dust Gallery, in Naseby. PHOTO: SHANNON THOMSON
Chisholm, who is now living in Naseby, decided to enter the work in Hope and Sons Art Awards at the Otago Arts Society (OAS) earlier this year as a way to increase her profile in Dunedin.

So when she got a call from the art society, while on holiday in the Marlborough Sounds, suggesting she might like to attend the awards ceremony, she was surprised. And even more so when she was awarded the top prize by judge Dee Copland.

"I had no idea. I’d had merits before, but nothing substantial. It was nice to have the recognition after all the years of hard work, all of us want to be seen and want our work to be understood. So it’s a huge honour."

Painting has been part of Chisholm’s life for many years even though she initially chose hairdressing as a career, working in the industry for 15 years.

"I went to school for art and sport, I’ve always doodled and pottered away. Always taken short courses in art."

When she got the opportunity to study art full-time 20 years ago she jumped at the chance. A successful student art exhibition encouraged her to continue and she has supplied galleries around the country ever since.

The only time painting took a back seat was when her children arrived. After struggling with infertility, Chisholm and her husband got the call of their dreams — they had been chosen by birth parents to adopt their baby. 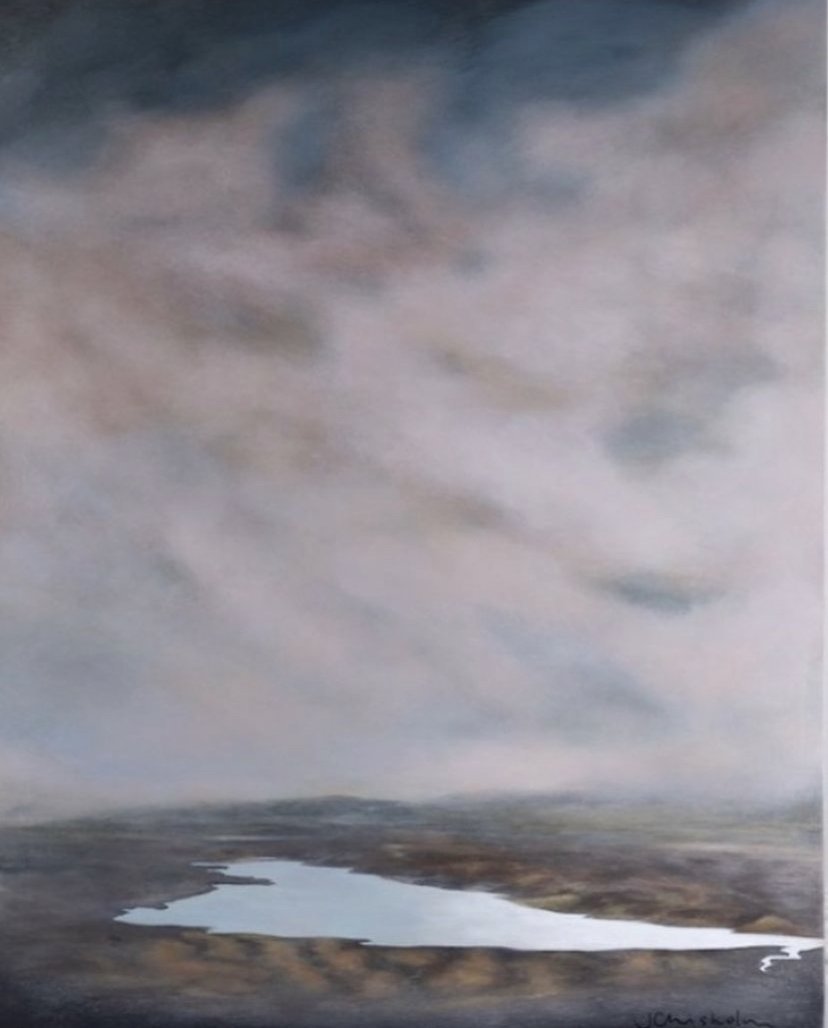 Gathering of Nature, Jenny Chisholm’s winning work which won the top prize in the Hope and Sons Art Awards. PHOTO: SUPPLIED
"With four days’ notice we got a gorgeous baby boy. Then eight months later we got the call again and adopted a baby girl. So art took a back stop."

The family had been living in Tauranga, but her husband always wanted return to the South, especially Central Otago where his family was.

"My husband handed in his notice in the morning and then the phone call from social welfare that we had been chosen for adoption came in the afternoon — it was a whole new way of living."

They initially moved to Christchurch before moving to and settling in Wanaka although with a few side trips overseas for her husband’s work as an engineer.

That included three years in Delhi, India, when the children were two and three years old. As they had space on the ground floor of where they lived, Chisholm ran a gallery exhibiting street children’s art and her own as well as running yoga workshops.

"We were living in a chaotic world in New Delhi so I wanted to create spaces to share with other people."

But the family always returned to Central Otago and about six years ago her husband gave up the travel and bought a business in Dunedin.

Recently the couple decided to rent out their Wanaka home and move to their crib at Naseby. She set up her studio in the spare room. 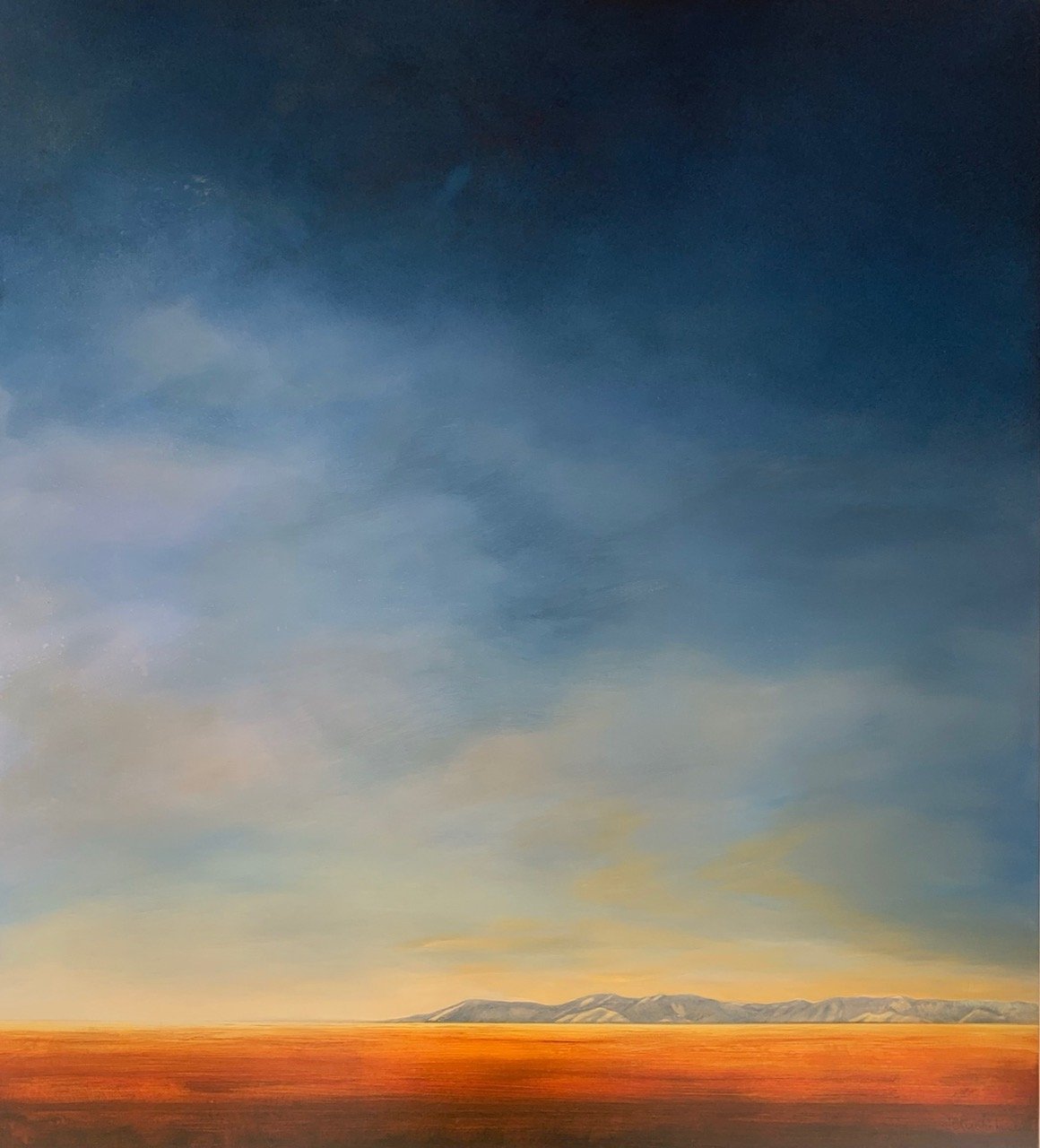 Passing Thru. PHOTO: SUPPLIED
When friend Phil Flanagan offered space to work in his renovated central Naseby building with the idea of opening a gallery alongside, Chisholm jumped at it and Star Dust Gallery was created featuring works by Chisholm, photographs by Flanagan and works by a couple of other artists.

Working in a public place suits Chisholm who thinks it is her hairdressing background’s influence which taught her to listen and ask questions.

"I like interacting with people, it’s a big part of how I communicate my work. While I’m mostly a landscape painter, they still tell a story and engage emotions."

She is also a neat freak. "I like things to be tidy and in order."

While she works during the gallery’s opening hours, she can also be found there late at night when the "creative urge" strikes.

"I’m forever trying to find ways to discipline myself and pull back as her motto is stop, pause, reflect."

Chisholm has always been drawn to the land, probably as a result of growing up on a farm and spending lots of time in the bush, building huts and playing.

"Most of my life has been in small towns and countries. I’ve lived in Sydney, London, Vietnam, in Asia but I’m always drawn back to nature." 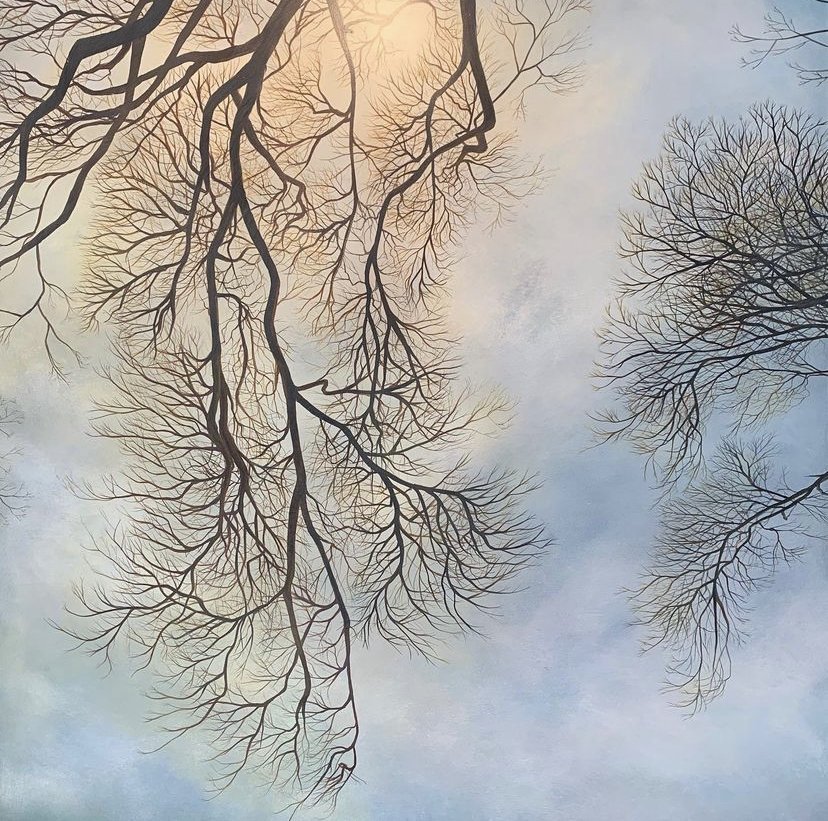 Look Up. PHOTO: SUPPLIED
She finds she is very sensitive to what the environment is doing and the way people use the land. That has often been highlighted by the family’s travels, which also included a stint living in Vietnam.

"It peeled back all the business in life and you realised how people live for real and what works in different cultures often comes out of necessity."

She found that translated into her art in opposite ways as she absorbed the impacts of pollution, large numbers of people and uncertain infrastructure. Her paintings continued to be soothing and serene.

"We are so lucky. Looking at our landscape reminds us how simple life can be."

As well as painting sky and land, Chisholm often paints trees as a reminder to look up.

"Nature is just such a big drawcard."

She has also done relief carvings of roots wrapped around a rock to indicate the firm foundations of family growth and change. It is a skill she picked up in art school and loved it just as she did stone sculpture.

Before she had children she attended stone symposiums and exhibited her sculptures at the Ellerslie Flower Show.

She still has one of the sculptures from this time, a small woman with her hands on her tummy, which she hopes will one day stand at the head of her grave. 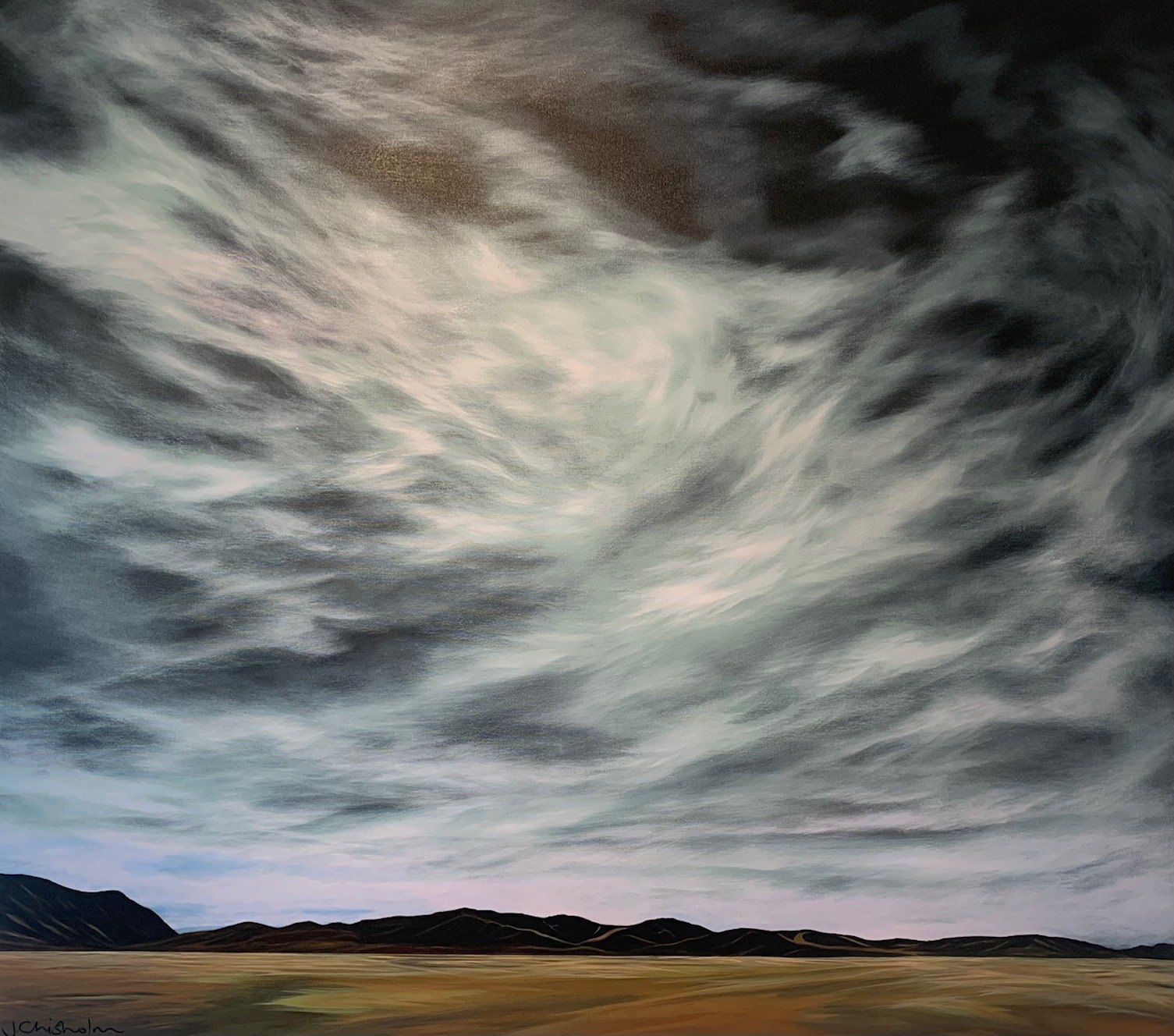 Skyward. PHOTO: SUPPLIED
While she shies away from any political commentary in her work, her winning work features Lake Onslow, a place that could change a lot in coming years if the pumped hydro-storage proposal goes ahead.

"Maybe in my sub-conscious those issues were there, but it was never my intention to paint it because of that."

Sometimes she features figures in her work which she sees as guardians of the land and likes to think her works promote people to think about precious things such as water.

The family bought land in Naseby 20 years ago after going for a drive one day and falling in love with the village. They built a crib and spent many happy times there.

"Even back then it was a place to slow down, it was safe for children. I love its history, its architecture."