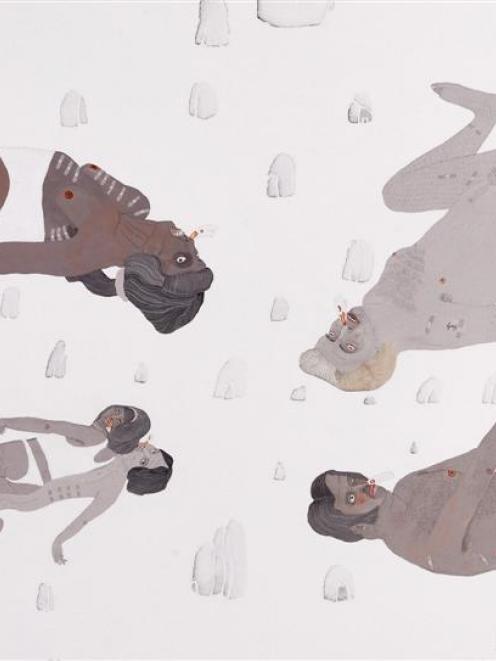 Rotation Prayer (detail), by Kushana Bush.
Kushana Bush dips into her personal Pandora's box and conjures up brave new worlds, then uses the most delicate of paints to battle demons. Nigel Benson meets an artist who mixes pleasure and pain.

It's surprising that Kushana Bush will open her first major solo exhibition in Dunedin tomorrow.

The 25-year-old Otago Polytechnic School of Art painting lecturer is considered one of New Zealand's most promising young painters, but has kept a low profile in her home town.

And that's just the way she likes it.

"I like to sit back and not be the main event. My work lets me explore things that I wouldn't otherwise," she says.

"I like to blend into the background, while the work plays with all kinds of bad manners. I get away with things on paper that I wouldn't get away with in real life.

"I like to paint hyperbolic versions of what I'm experiencing or what I see other people experiencing and take it to its breaking point.

"Basically, the work flirts with the promise of obtaining truth or meaning in life, and the conflict occurs when my characters and I realise truth just isn't possible. I hope that's what makes it [her art] both challenging and accessible to people," she says.

"It has things that people are looking for, but [they] are also a bit frightened of it."

Bush has embraced a painting medium dating back to the 14th century to create her latest works.

"Gouache is my preferred medium. It's a very fluid drawing medium, lending itself to detail," she says.

"It has substance and doesn't come off as synthetic. It also doesn't have so much baggage as other paint types can have.

"I really like the tension you get with it, too. If you make a mistake it's very hard to undo it. There's no erasure.

"With oil and acrylic you're working against a kind of glue. Whereas, gouache is just pigment mixed with gum arabic and chalk.

"It's paint at its purest and you need water to activate it. Then you pool it on to the paper and let it rest. You're not pushing it around like other paints," Bush says.

"Gouache is very immediate, only taking as long as the water takes to dry.

For this series I mixed about 30 jars of different skin colours. I couldn't come up with names for them all, so I had to just number them," she says.

"The only drawback with gouache is it's very delicate and can disappear with a wet sneeze if it isn't fixed or protected under glass.

"It's a very tense, concentrated process, because you can't make mistakes and, as a viewer, it is tense too, because you could easily damage them.

"That's another one of the things I enjoy about the medium. It makes it more precious."

Bush's latest exhibition bridges her 2007 exhibition, "Slump Series", in which she examined apathy through a society of disenfranchised figures existing in a death-in-life vacuum.

"The Revival" moves on from that condition, establishing a community of meditating people seeking guidance in a medieval realm.

The project responds to the shift in community and shared belief systems in contemporary society, Bush says.

"I've deliberately tried to make the setting look artificial. I don't know if I'm serious or if I'm mocking this spiritual realm - I think it could be both," she says with a smile.

"The work is not fantasy and I don't think of the characters as grotesque; they are just a society exploring options not available in reality. It's a setting that's either at the beginning or the end of the world, or perhaps just an initiation ceremony.

"It's a hook in the 'real' for me. It's definitely got a hinge on my reality. It's a balance between drawing on my own experiences and hoping they have a collective resonance."

Bush grew up in Dunedin, attending Otago Girls High School before completing a fine art degree at the Otago Polytechnic School of Art in 2004.

She discovered gouache when she was researching her degree.

"I was initially researching Indian and Persian miniature painting," she says.

"But I've recently been more interested in the gruesome, religious narratives of medieval illuminated manuscripts. Most miniatures allow naughty things to go unnoticed, either because people don't see it or because they don't expect to see it in such a decorative setting.

"These paintings invent a culture where hairy legs, nudity, violence, and spotty chins, are the norm. I hope this will destabilise viewers' expectations of the body and the cultural practices that go with that."

"The scale takes them away from the Indian and medieval miniatures.

Part of the challenge for me was to physically explore making on a larger scale than previous bodies of work.

But, because gouache needs to be painted on a flat surface and not vertically, you'll be bending to the centre of the work, trying to stay balanced while painting an eyelash."

Bush paid a heavy price for her art.

"I started physio for my back while I was making the work. I lost some of my eyesight, too, so I've also been going to an optometrist.

"I'm pretty focused when I'm painting. You have to be. If you start thinking about other things and drift away you can destroy days of work," she says.

"I think that the concentration and tension put into the works comes out in the expressions of my characters who look like they are in a state of either euphoria or tormented seizure.

"I really enjoy where my mind goes when you get into that zone of concentration and tension."

Gouache (pronounced gwash) is derived from Italian for water paint or splash, "guazzo".

The medium was developed in Europe in the 14th century, where it was valued for its matte qualities.

Bush's paintings are already held in the collections of the Centre of Contemporary Art, the James Wallace Trust and the Otago Polytechnic School of Art.

"The Revival" by Kushana Bush opens at the Brett McDowell Gallery tomorrow and runs till September 18.