The City Choir Dunedin is celebrating its 150th anniversary this weekend, but it's been a history of ups and downs, Dr Jenny Burchell tells Charmian Smith. 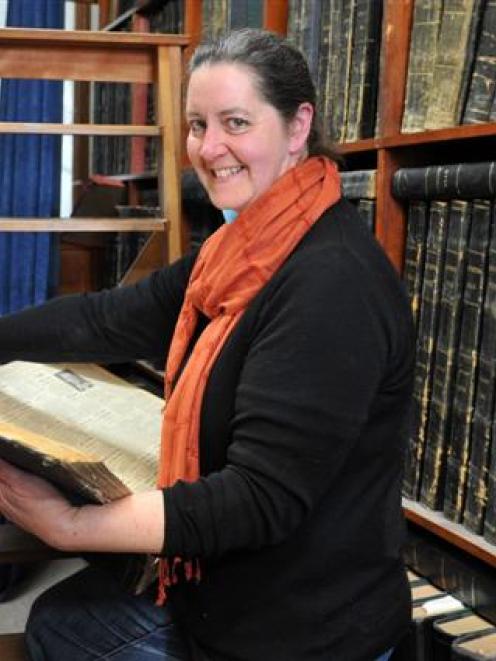 Dr Jenny Birchell believes the City Choir has been a mainstay in Dunedin for the past 150 years due to the strength of the vision, determination and dedication of its members. Photo by Craig Baxter.
Dunedin's city choir began as the Dunedin Philharmonic Society in 1863, and gave its first performance of the Messiah at Christmas that year. But that first flush did not last, says Dr Jenny Burchell, and four years later it had fizzled out.

The musicologist and social historian has been researching the history of the choir for a book that will be published next year. It was to have been out for the celebrations this weekend, but so much new information kept emerging that it has been delayed.

None of the choral societies in New Zealand could claim to have a continuous progression. Particularly in the 1860s and '70s all of them had internal strife and factions, Dr Burchell said.

However, each time the Dunedin choir folded, it started again. Each new incarnation had the same purpose, to put on large-scale works, and the same people were involved, which is why she claims it can be described as the same group.

''What really astonishes me, looking at the full spectrum of 150 years, is the strength of the vision and the total determination and dedication that has kept it alive, and if it collapsed, it started again. It came home to me when I started to look at what happened during the Second World War when the society was almost pushed into recess. In other places, the Auckland Choral Society was shut down but the Christchurch Harmonic Society and the Dunedin Choral Society followed the same track - they decided they would still do the Messiah each year, come what may, and in the meantime they would do small performances anywhere they could. But they always had in mind that this was not what they were going to do. This was just temporary and their permanent focus was still the large-scale performance.''

The Philharmonic Society was established by George West, who had a music shop and was involved with other groups including the Provincial Brass Band associated with the Provincial Hotel. The committee of the philharmonic was associated with St Paul's Anglican Church, which is not surprising because they were the people Mr West knew and also because the choral tradition is a very English thing rather than a Scottish thing. Presbyterians thought singing and dancing frivolous entertainment, although they were keen on domestic music, she said.

''That isn't to say there weren't Scottish choral societies because there were, but the greater part of the Scottish population of Dunedin had not come from either areas or a demographic that was likely to be involved in that sort of music.

''Presbyterians sang psalmody in the church and that was it, particularly the Free Church ones, who were very strict. This is one of the reasons the establishment of choral music is relatively delayed in Dunedin because the general culture of the town was facing in quite a different direction. There were no public concerts until 1858 and it was only with the influx of the general population with the discovery of gold that things got big enough and changed around enough to make it possible.''

Mr West left the Philharmonic in 1866 after offensive remarks about a concert that had to be cancelled. The bass soloist had to pull out because he was going to be out of town on business and his replacement decided, three days before the concert, that he wasn't going to do it. After Mr West's departure, the society fizzled out as there was no other conductor of his ability to take over, she said.

However, four years later Mr West founded another choral society with Arthur Towsey, the organist at St Paul's, and despite the singing members objecting to having no say on the permanent committee, and the re-establishment of an elected committee, the society eventually blossomed, she said.

Mr West resigned again at the end of 1879 on account of indiscreetly removing his jacket during a rehearsal of Messiah.

Dr Jenny Birchell believes the City Choir has been a mainstay in Dunedin for the past 150 years due to the strength of the vision, determination and dedication of its members. Photo by Craig Baxter.
''West seems to have been a man who was bursting with energy and drive and he just got too hot - it was a very hot summer - and took his jacket off without thinking. Apparently he rolled his sleeves up as well which was even worse, but it seems to have had a far greater impact on him than on anyone else. Jennie Macandrew his daughter was there - she was the pianist - and she recorded that this was very shocking. It's quite plain from the fact that the committee refused to accept his resignation and the rest of the society didn't want to either, that it was far more shocking in his own mind than in anyone else's, It wasn't the done thing, but it wasn't the scandal he thought it was.''

The third incarnation of the society was in 1897 and the organisers seemed to harp back to the first society, which was like a singing club, she said.

''They felt it was very important they should educate the members themselves and also the taste of Dunedin audiences. How they thought they were going to do both, how they were going to educate Dunedin audiences to what they described as `heavy' music badly performed I'm not quite sure. They stuck determinedly to conductors they thought would be polite. It wound up in 1914.''

Many of the members migrated to a new choral society established by Sydney Wolf, a singing teacher and choral conductor. Entry was by audition, the committee was relegated to administrative support and the musical leadership left to the professional, Mr Wolf.

''Right through the 1920s, looking from the outside in, as soon as they thought things were coming right, something else would go wrong. The war had finished and they were coming up to the anniversary, Wolf had died and Victor Galway [organist at First Church] was there, but it emerged that some financial mismanagement had been going on. It was just poor administration, then when they were starting to come out of that, it emerged they were not going to be involved in the [New Zealand and South Seas 1925-6] exhibition. It was a difficult patch for them.''

However, the four performances they gave in their own right at the time of the exhibition were better reviewed than the exhibition choir, then Mr Galway resigned, she said.

By the mid-1930s the choir was large, with sopranos heavily outnumbering the men and drowning them out in performance. Some voices were past their best and a reviewer reported that some sopranos could not reach the top notes so sang whatever they could and it sounded terrible.

A moment of deep humiliation came when the choir entered the Dunedin Competitions Society's big choirs competition and came second last, behind choirs from Christchurch and Timaru and two local choirs of pupils run by their teachers.

Dr Jenny Birchell believes the City Choir has been a mainstay in Dunedin for the past 150 years due to the strength of the vision, determination and dedication of its members. Photo by Craig Baxter.
The committee was persuaded action needed to be taken, the choir was reduced to 80 and it rebranded itself, she said. There was another purge in 1969 when the choir amalgamated with the University Music Union as the Schola Cantorum and conductor Jack Speirs reauditioned members and reduced the choir to 50.

''A lot of people are still scarred by that one and the ODT described the next concert as 'a considerably streamlined choir' which suggested a fair amount of savagery.''

Dr Burchell's research included choir archives, programmes, scrapbooks, minute books and diaries from the Hocken but most of her information came from newspapers, the ODT and Evening Star as well as earlier papers such as the Morning Herald, Daily Telegraph, Otago Mail and Otago Journal. As a musicologist, she worked on newspaper research for her doctoral thesis at Oxford University and says she got very good at scanning pages on microfilm, attuning her brain to pick out the right words.

However, it could be frustrating as repeating patterns began to emerge.

Generally speaking newspaper critics were clearly very knowledgeable, and made all kinds of remarks that a modern reviewer would find it very hard to get away with in the way of personal criticism.

''I think most of the repeating patterns are now broken, but it did get to the point where I could see the trouble spots where they appointed a conductor who was perhaps less musically competent than a large number of the choir, or where committee and conductor lacked focus: you have to have focus.

''Other lines of trouble were very expensive soloists combined with falling audiences, which is a sheer indication of trouble, and a large number of miscellaneous scrappy concerts,'' she said.

''Things are interrelated: if you don't have a good conductor and if there is no vision for starters, people will drift away. If you don't have a good competent conductor people will say: 'I can go and sing somewhere else' and you lose the competent members. Then the less competent ones are not in a position to improve because they haven't got leadership from within, everyone gets disheartened, the standard of performance drops, people don't come to the concerts, you have financial problems. Repeated repertoire was the other thing, not counting the Messiah which is a special case on its own.''

In the early years reviewers and critics made allowances for amateurs, but that changed in the 1870s, she said.

''There came a point where the Morning Herald critic got particularly vituperative and the Evening Star followed suit, that it was all very well making allowances for amateurs but amateurs had to work hard and progress and if they didn't progress they would really let fly and they did.

''Generally speaking newspaper critics were clearly very knowledgeable, and made all kinds of remarks that a modern reviewer would find it very hard to get away with in the way of personal criticism,'' she said.

When she finishes the choir history, Dr Burchell has another book on early Dunedin music in mind, about the networks of people who worked together in the first 50 years - or didn't work together - and the way different establishments co-operated.

''Such a lot went on but the only book in print is full of inaccuracies, Margaret Campbell's Music in Dunedin 1947. This is my next task, once the choir history is out of the way, is to go back and write the book that would have been very handy to have to refer to beforehand,'' she said.

See it
City Choir Dunedin's 150th celebrations over Labour Weekend culminate in its ''Choral Masterpieces'' concert at Dunedin Town Hall at 5.30pm on Sunday, October 27. The choir and the Southern Sinfonia, with Helen Medlyn (mezzo-soprano) and Martin Snell (bass) will perform excerpts from many of the best-loved pieces in the choral repertoire.