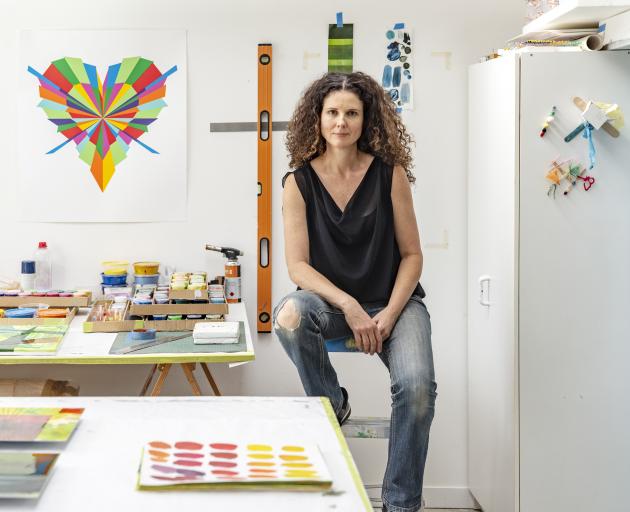 Sara Hughes at work in her Auckland studio. Photos: Supplied
Whether it is vinyl, magnetic board, canvas or glass, Sara Hughes finds the material to create and convey her ideas. Rebecca Fox reports.

Hughes, a painter who is also known for her large-scale installations, says her two sons - aged 5 and 7 - are a strong influence on her practice.

''Having children opened my eyes in new and unexpected ways. I was fascinated when they were young to watch their visual world develop and expand. To notice how they responded to visual changes and were able to detect patterns [and] understand depth perception.''

Her sons' demolition tendancies, along with her memories of playing Chinese checkers and draughts on miniature magnetic boards during summer holidays as a child, have combined for her work All My Favourite Shapes commissioned by the Dunedin Public Art Gallery as part of its latest exhibition ''In Motion''. 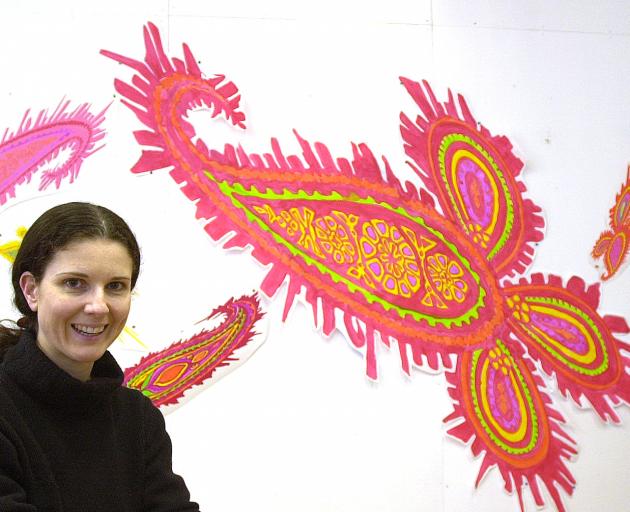 Sara Hughes with the paisley work she completed as Frances Hodgkins’ Fellow. Photo: Supplied
''There is this fantastical element of the work that takes the form of a giant magnetic board with a range of magnet shapes that can be moved on to, over and off its surface.''

She wanted to involve the viewer in similar questions to those she poses herself - how does one approach a blank wall? How does image and composition relate to space, how does one make a decision about placement? How do you create composition?

''There are elements of my own practice in this work, yet I am giving it over to the viewer to make the decisions.''

It is the first time she has used magnetic sheet to create a work.

''I'm looking forward to seeing it activated in the gallery.''

Play and problem-solving are important in this work, as viewers are presented with a choice of what shapes to pick and then where to put them.

''I want to leave the decision-making aspect of the work open. The irregular shapes and angles offer a myriad of potential directions and formations.''

She envisages people interacting with her work in various ways, by themselves and in groups, from placing a shape quickly to spending an hour arranging and rearranging.

''In previous interactive works I have created, I have noticed children and adults working together discussing ideas and experimenting.''

All My Favourite Shapes is just one of the projects the busy artist has been working on.

As it opens in Dunedin she is also completing an exhibition for Auckland's Gow Langsford Gallery relating to her own childhood in Northland's Hokianga and her memory of light and colour.

''My life and art are intertwined.''

Hughes has also been working on a major work for the New Zealand International Convention Centre for the past three years. The work is on 2400sq m of glass and over 550 panels that wrap around the top level of the building.

While every new project has challenges, she says the convention centre project has been the most challenging due to its scale, timeframe and as manufacturing of the work needed to be done in Singapore.

She has worked with many different materials to create her large-scale installations.

''This takes a lot of experimentation and testing.''

The materials are chosen for what they bring to a location, how people will experience them and for the conceptual ideas she wants to convey.

For the ''Flag Wall'' she created for the reopening of Cathedral Square in Christchurch after the earthquakes, she felt it was important to create a work that ''touched the ground lightly and brought life and colour into the square''.

She used the flagpoles that remained standing outside the old post office to create the wall of more than 700 colourful flags.

In her early days, she often used signwriting vinyl, as it was an affordable way to make large works such as Paisley Works, which she created during her times as the Frances Hodgkins fellow in 2003.

She researched the paisley pattern and the history of paisley shawls in Dunedin, which culminated in the creation of cut painted vinyl adhered to the walls of the top floor of the Dunedin Public Art Gallery in ''stretched evocative shapes'' referring to the paisley forms but alluding to more.

''As opportunities have grown, I have had larger budgets which has given me the chance to work with many more materials.''

Whatever the medium for her work, Hughes uses strong colours.

''Colour is very important in my work. But the way I use colour is varied.

''It continually asks me to evaluate its relationship between the emotional and rational and the scientific and the magical - its multiplicity gives me much to work with.''

This love of colour and shapes goes back to her childhood. She loved art and making things growing up, which developed over time, leading her to Elam School of Fine Arts to complete a bachelor of fine arts degree.

She then headed overseas in the mid-1990s, visiting churches, temples and historic buildings, where she encountered art within architecture.

Now described as a ''mid-career'' artist, Hughes has exhibited in major galleries in New Zealand and her paintings and installations are held in public and private collections here and in Australia.

She has won the Wallace Award and Norsewear Art Award and was the first New Zealand recipient of the RIPE: Art and Australia magazine art award.

As well as the Frances Hodgkins residency, she has participated in the International Studio and Curatorial Programme in New York and the Creative New Zealand Berlin Visual Arts Residency.