By Rebecca Fox
0 Comments
Sometimes science and technology need to catch up with artistic endeavour for magic to happen.  Rebecca Fox talks to British artist Luke Jerram about hanging the moon - literally.

Man stepping on the moon for the first time brought the world to a standstill in amazement.

Fifty years later, the general public cannot step on the moon, but they can see it close up without a telescope or a spaceship ride thanks to a British artist. 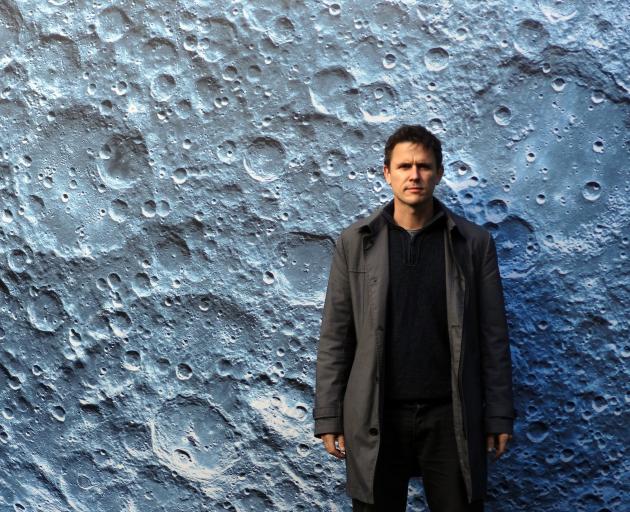 Luke Jerram with his Moon. PHOTO: SUPPLIED
Luke Jerram has created a 7m diameter moon, using 120dpi detailed Nasa imagery of the lunar surface, which he suspends from the ceilings of museums, galleries and cathedrals around the world.

Lit up by "moonlight" and accompanied by a surround-sound composition, Museum of the Moon has enthralled more than 3million people worldwide.

"It looks like it has this amazing texture on the outside . . . there is this optical illusion that makes people feel like it is the real moon I’ve presented in front of them."

People have been known to lie down and "moon bathe" under it, set up deck chairs around it or just simply spend hours looking and listening.

"In Bristol we had an unexpected group of visitors who arrived in slow motion to the exhibition dressed as spacemen."

Jerram, like so many children, was fascinated by the moon growing up and always wanted a telescope.

It was not until he was cycling across Bristol’s river to work one day that the seed of this idea of his "moon" took hold as he noticed the tide going out. 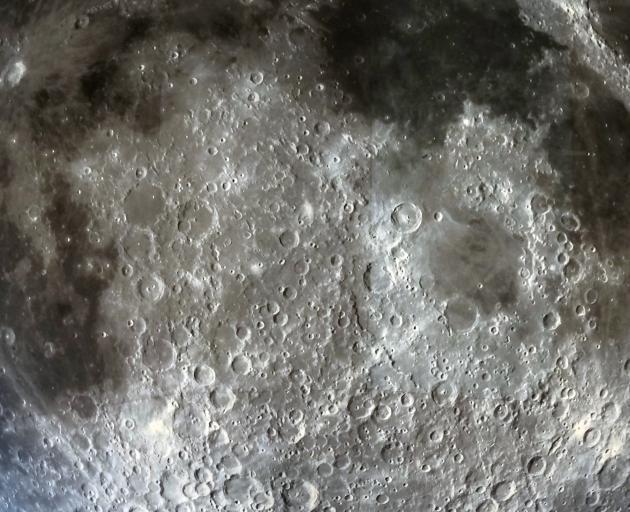 Bristol has the highest tidal range - a 13m gap between high and low tides - in Europe.

"It reminded me that it’s the gravitational pull of the moon that is making this happen."

That was about 15 years ago, but it has only been more recently that the imagery from Nasa became available and the printing technology that could make it, became a reality.

"Now, with my very own moon, I can fly there, study every detail and share this experience with the public. We can explore the far side of the moon which is never visible from the earth."

Jerram calls his moon installation Museum of the Moon as he designed it to be shown in different public spaces both indoor and outdoor around the world.

"Museum of the Moon allows us to observe and contemplate different cultural similarities and differences around the world and consider the latest moon science." 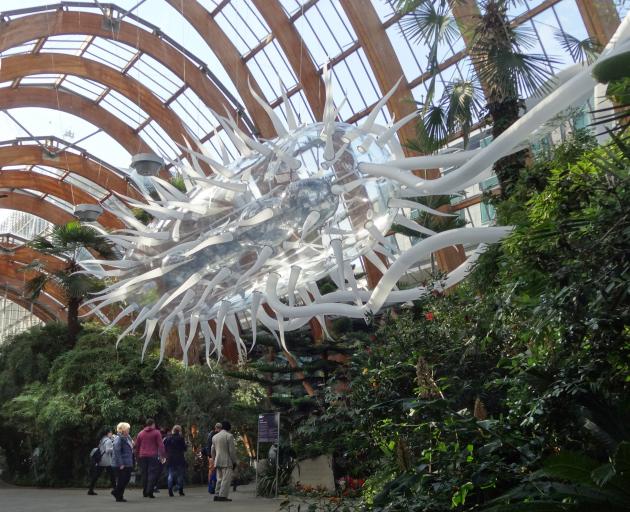 Another work by Luke Gerram — an E.coli sculpture in Sheffield Winter Gardens. PHOTO: SUPPLIED
For New Zealand audiences, Jerram has created a slightly smaller 4m diameter orb, which has been showing at Nelson Provincial Museum as part of its "Our Moon: Then, Now & Beyond" exhibition.

Jerram, who is known for his installation works, especially those linking art and science, likes to keep some mystery about how his moon is constructed and suspended.

"Everyone knows the moon is made of cheese."

We do know it took six months to make as there was a lot of prototyping, planning and fundraising done to make it a reality.

The 23m-wide, high resolution Nasa image is at an approximate scale of 1:500,000, and each centimetre of the internally lit, larger-size spherical balloon sculpture, represents 5km of the moon’s surface.

The imagery was taken by a Nasa satellite carrying the Lunar Reconnaissance Orbiter Camera launched in 2010.

"I wanted to make the artwork seem as authentic and realistic as possible. For most people this will be their most intimate, personal and closest encounter they will have with the moon."

He believes wherever the artwork is presented the meaning and interpretation of it will shift whether it is a cathedral, warehouse, science musuem or arts centre.

"Different cultures around the world have their own historical, cultural, scientific and religious relationship to the moon."

The Moon has hung in Rochester Cathedral, The Bentway, in Toronto, Canada, floated over dancers in the Blackpool Tower Ballroom during an episode of BBC1 television show Strictly Come Dancing and hung over the main pool at St George’s Swimming Pool in Rennes, France, for people to swim under it - to name just a few venues. 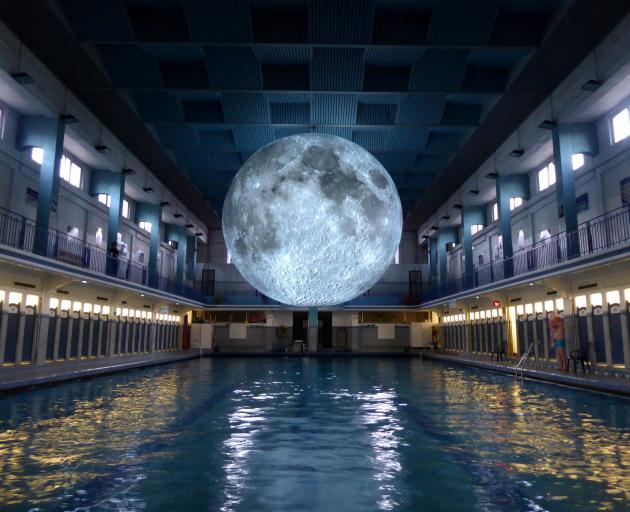 Museum of the Moon hovers over the main pool at St George’s Swimming Pool, in Rennes, France. PHOTO: LUKE JERRAM

An important part of the exhibition for Jerram is for each venue or host to curate their own moon-inspired events which reflect their local culture.

In Dunedin, the Moon will be hung in former church, now a concert and rehearsal venue, Hanover Hall.

On display beneath the Moon will be the Nelson exhibition including photographs focusing on Nasa’s science experiments in space and its past, present, and future space travel; and a feature display focusing on traditional Maori practices of navigating by the stars, and how the Moon is used in daily life.

There will also be hands-on activities and learning opportunities and a waka from Hauteruruku ki Puketeraki Waka Club will be on display.

"This way the artwork can reflect the culture and community of a venue."

The Museum of the Moon is just one of Jerram’s many eye-catching multi-disciplinary projects. Others include In Memoriam, a temporary memorial for those lost during Covid-19 and a tribute to healthcare workers featuring flags created from NHS bed sheets and arranged in the form of a medical logo.

He also mixed science with art in his creation of a 27.4m E.coli (5million times bigger than real bacteria) as he sought to make the microscopic world visible. And he has created a series of transparent, colourless glassworks in the shape of different viruses, including Covid-19, called Glass Microbiology, which are in museums around the world and used in medical text books.

Jerram also could not let his marriage proposal go without an artistic twist - his engagement ring talked - and for his wedding he created a portrait projection ring with a local jeweller. In a darkened room, light from a candle or LED passes through the ring to project a series of portraits. A selection of miniature slides were made of different family portraits and inserted into the edge of the ring for projection.

These endeavours are created by Jerram with a team of people.

"Generally speaking, every object around us has been made by multiple people working together to design and create it. The fabrication of complex art works is really no different in that respect. You need multiple skill sets of people coming together in the right way to make them."

He enjoys the collaborating, believing it makes anything possible.

"As an artist, collaboration makes my life far more interesting. I like learning the language and limitations of the different fabricators I collaborate with."

He has worked with composer Dan Jones, who created the music for Museum of the Moon, for more than 15 years.

A temporary memorial for those lost during Covid-19 features flags created from NHS bed sheets. PHOTO: FINNBARR WEBSTER
"We both understand the power that music has to paint imagery in our imaginations."

For his Glass Microbiology series he works with virologists from the University of Bristol as well as glassblowers.

Jerram’s interest in science, engineering and the arts goes back to his childhood in Gloucester.

"I was always pretty good at drawing and interested in how things worked. I was the sort of kid who’d take a radio or TV apart to see what was inside. The appliances never seemed to work again afterwards!"

He graduated with a fine arts degree in 1997 and moved to Bristol where he has lived since.

Given the scale and diversity of his installation-based practice it has not always been an easy road.

"I just decided not to repeat myself, to keep innovating and questioning what I do."

He puts his success down to being open to possibilities and being able to adapt, side step and reinvent himself during the 25 years he has been working as an artist.

"Galleries were never really interested in my practice at the beginning of my career. So I’ve learnt about sales, marketing, PR myself."

Jerram has also had to learn less-traditional artistic skills such as research and development, project management, touring and shipping and health and safety.