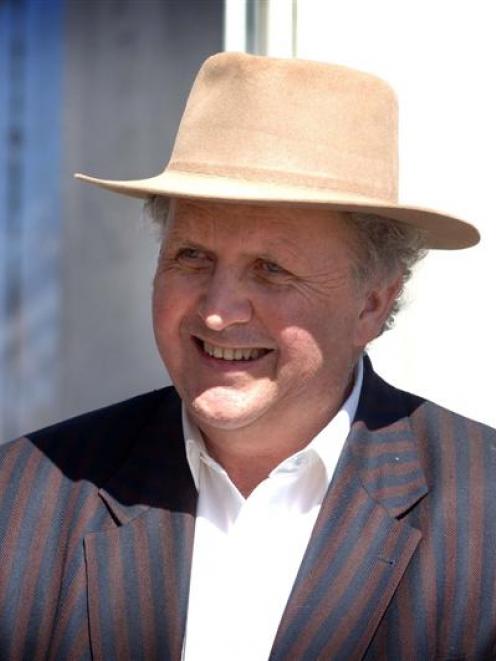 Alexander McCall Smith has an inner compulsion to write.

The prolific Scottish author completes four or five titles a year and has written more than 70 so far.

Many of his novels are in series - the No.1 Ladies' Detective Agency, The Sunday Philosophy Club, 44 Scotland St or Professor Dr von Igelfeld series, but there are also many stand-alone titles such as his recent The Forever Girl (Polygon), and a host of children's books, and that doesn't include a slew of academic texts or his recent What W.H. Auden Can Do For You (Princeton University Press) on the 20th-century poet who has long fascinated McCall Smith and how art can help us live.

''I feel [writing] is something I've got to do, that I want to do, and it never really lets go of me. I realise I'm always thinking about novels and short stories and whatever I'm going to write. The ideas keep coming to me and I can't really get away from that, but I don't particularly want to get away from it. It's quite an insistent muse that knocks on the door all the time. I just accept that as my lot and enjoy it,'' he says.

He apologises for the poor phone line as he is speaking all the way from the coast of Argyle, a remote western corner of the Highlands where he and his family have a holiday house and a boat that he plans to sail the following day.

Born in Rhodesia (now Zimbabwe) in 1948, in the early 1980s he spent three years in Botswana - the setting of his charming No.1 Ladies Detective Agency series that features the redoubtably intuitive Mma Precious Ramotswe.

A specialist in medical law and bioethics, he spent most of his career at Edinburgh University, of which he is an emeritus professor, and sat on many committees.

However, when his novels took off about 15 years ago he had to decide whether he wanted to be a full-time writer or continue with his career as a professor of law, he said.

''I thought originally I would continue with my career and I took unpaid leave of absence from the University of Edinburgh, thinking I would go back, but very quickly it became too complicated and busy and I couldn't see myself going back to that so I became a full-time writer, which is what I really like to do,'' he says.

His books have a gentle humour and a cheerful quirkiness about them which he admits probably reflects his philosophy of life.

McCall Smith seldom rewrites or does more than one draft of his books, although he may make some changes.

They tend to come out fully formed and in their final form, he says.

''I have a general idea as to what is going to happen in the book but I'm constantly surprised by the fact that as I write it, it may branch off on lines that are rather a surprise to me. I don't have very detailed plans when I begin, then I start to write and I don't have to sit there and think what is going to happen next. It just comes to me and it comes out of the mind. I think it comes from the subconscious mind to a great extent. I sit at the keyboard and things come out.''

However, he always has ideas for books he is writing or going to write floating round in his mind, he says.

''When I'm leading my ordinary life I see things that will set me off on a fictional train of thought. The difference, I suppose, between me and the person I'm standing next to at any particular time may be that I'm thinking of fictional possibilities, and thinking about things in a slightly different way. But nonetheless I'm doing the usual things that other people do. I suppose the ideas pursue me a bit and if it's a good idea I'll have to write them down. That's a little bit different.''

He plans the books he is going to write and when they will be finished for about 18 months ahead. It means he has to write something every day, averaging about 2000-3000 words, but at full tilt will write 4000, he says.

At the moment he is writing the 15th volume in the No.1 Ladies Detective Agency series, which he plans to finish while he is in New Zealand.

He enjoys meeting his readers on book tours and recently spent three weeks in Australia. He has had a month at home in Scotland then leaves for New Zealand, where he will attend writers festivals in Dunedin, Christchurch and Auckland next week.

Luckily he finds he can write without too much difficulty when he is travelling, including on planes.

''It's quite a high pressure and quite a complicated life. I'd like to have a simpler life but it's very difficult to simplify one's existence.''

Besides writing and travelling, he plays bassoon and more recently baritone saxophone in the Really Terrible Orchestra, of which he was a founder.

''I'm a very bad musician, but so is everybody else in the Really Terrible Orchestra. We make a bit of a noise and we have great fun playing. The orchestra gives people the opportunity to play with other people, which is very therapeutic. Even the audience appears to enjoy seeing a group of rank amateurs enjoy themselves. We are trying our best but our best is pretty bad,'' he said.

He is looking forward to visiting Dunedin with its Edinburgh connections and street names and expects a sense of deja vu.

He visited many years ago in his previous existence as an academic, he says.

Meet him
An afternoon with Alexander McCall Smith, hosted by Scottish writer and Dunedin resident Prof Liam McIlvanney, is on Saturday May 10, at St Paul's Cathedral from 2pm-3.15pm.

For a full programme of the Dunedin Writers Festival visit www.dunedinwritersfestival.co.nz