Orchestra is his instrument 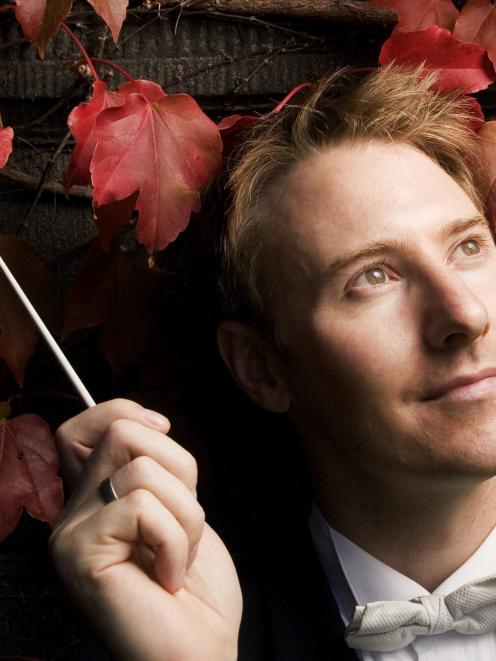 Ben Northey was a precocious child. He would sit and really listen to a record from his parents' collection of classical LPs, from the start to the end.

His mother, a pianist, and his father, who played guitar and sang folk music, were very keen on early childhood music and at the age of 5, he started learning violin.

Being a curious child, he went through a plethora of instruments: trumpet at primary school, playing with the local brass band, then flute at high school.

Looking for a change of image in his teenage years, he switched to soprano saxophone, then became a multi-woodwind player: flute, soprano sax and clarinet.

After completing his undergraduate degree in Melbourne, he found a lot of work as a professional musician, recording, arranging, composing for film, radio and television, directing groups and doing casual work with the Melbourne Symphony Orchestra, of which he is now associate conductor.

However, in his late 20s, he went back to university and his curiosity led him to conducting.

John Hopkins, a former conductor of the NZSO, must have seen something in him because he invited Northey to become the first student in the new master's degree in conducting at Melbourne University, he said.

''It was a full-time commitment and a big fork in the road. Then I won the Symphony Australia Young Conductor of the Year Competition in 2001 and the prize funded study in Europe.''

He studied at the Sibelius Academy in Finland, where he met Pietari Inkinen, now music director of the NZSO, and they became friends.

Since then he has developed a busy career as a conductor, mainly in Australia, New Zealand and Asia.

''The orchestra is my new instrument,'' he said with a laugh. Northey (43) enjoys the psychology of bringing out the best in a group of musicians. An orchestra is a powerful force for good, for adults co-operating together, he said.

''I love the unifying capacity of the position. I can bring people together for a common purpose. I've always been a social person and a big part of a conductor's job is to work with people and play together and make music at a high level in a large group.''

Believing an orchestra is the pinnacle of musical experience and has relevance and vitality in the modern world, he is involved in community and educational work with orchestras. He has worked with the National Youth Orchestra at summer camp.

''Some of the highlights in educational concerts are opening young people's eyes to the power of music. When we play concerts to young people, they are like an open book. They are often most fascinated by modern works. Those are the ones they remember and relate to.''

In this tour with half the New Zealand Symphony Orchestra - the other half is touring the North Island - he will be conducting ''thrilling and very popular works and with an exciting soloist'', he said.

Armenian cellist Narek Hakhnazaryan, winner of the prestigious 2011 Tchaikovsky competition, will be playing Tchaikovsky's Variations on a Rococo Theme.

''He is potentially one of the best cellists in the world. He is astonishingly mature at a young age; he has effortlessness and technical capacity. He has mastered his instrument and is able to express himself so naturally and beautifully for a young player, which is very unusual. Every player wants to be that uninhibited. It will be a highlight,'' Northey said. The concert opens with Mozart's Symphony 31 ''Paris'', a bright, sunny crowd-pleaser, he said.

''Mozart was trying to drum up work in Paris and wrote to please the audience, which he can do well. It's filled with energy and has a beautiful andante, the slower movement. It's a good way to start a concert with the full orchestra playing. Mozart was 22 when he wrote it and it leaps off the page with youthful enthusiasm.''

Like the Tchaikovsky piece, Grieg's Holberg Suite of variations for strings refers to 18th-century dance forms, he said.

Grieg's Peer Gynt Suite No1 contains some of the most famous orchestral pieces, Morning Mood and In the Hall of the Mountain King. It is filled with melodies, which is the genius of the composer.

''They are incredibly programmatic. When people hear the first one they say it reminds them of being in the forest or relaxing, but when they hear the title it makes perfect sense. It's a simple melody that's easy to remember and you could almost come out whistling,'' he said.

''In the Hall of the Mountain King is a chase. I tell children they are being chased through a mountain by trolls lurking in the dark. It starts slowly and becomes more frenetic as Peer Gynt runs. It builds tension and you are left with a question at the end of the music, did they get him or not?''