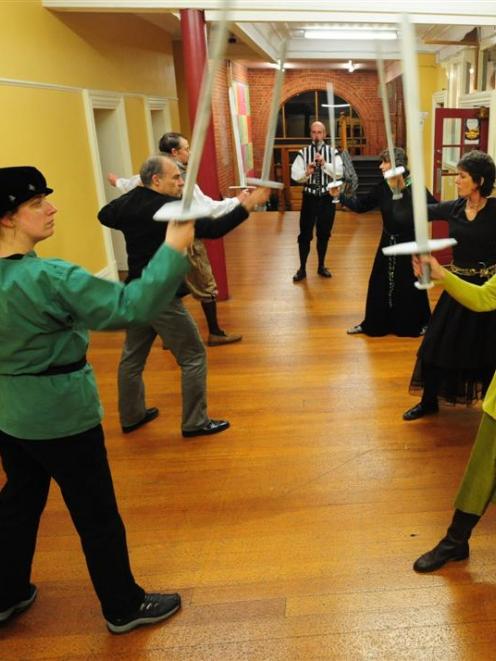 At a medieval dance rehearsal at the Carnegie Centre on Sunday are (clockwise, from front left) Jules Mann, Donald Reid, Alan Edwards, Jonathan Cweorth (with rauschpfeife), Helen Edwards, Christine Ogilvy and Anneloes de Groot. Photo by Craig Baxter
Something about a particular historical period - the music, the clothes, the way the society worked - seems to strike a chord deep within you, and contact with that culture feels rich and adds depth to one's life, according to Jonathan Cweorth, founder and organiser of the Dunedin Medieval and Renaissance Society.

"That's the way I feel, particularly about the Renaissance. It's impossible not to be fascinated by Elizabeth I and the whole history of Renaissance Europe but it's only since coming to Dunedin and meeting like-minded people here that I've been inspired to actually start groups.

"I found Dunedin is a very good place, a very creative place to start initiatives and people are willing to give things a go."

The Dunedin Medieval and Renaissance Society is putting on its annual midwinter concert, "The Triumph of Mars", in the Dunedin Public Art Gallery tomorrow.

On Saturday there will be workshops and demonstrations exploring aspects of medieval and Renaissance martial arts.

Raised in Australia but disillusioned by the Howard government, Cweorth came to Dunedin in 2001.

"There were some really disgraceful things happening with regard to the treatment of migrants and the whole approach to the refugee question.

"It exposed a side of Australian society that I hadn't really grown up with.

"I was used to the relatively sunny and outward-looking mood I'd grown up with in the 1970s but it had turned quite dark.

"I wasn't sure I wanted to be part of that society.

"I looked around and New Zealand looked like a healthier and more open society, so I thought I'd like to be part of that."

He took a Freedom Air flight to Dunedin, and stayed.

"I loved New Zealand and particularly loved Dunedin. I'd experienced growing up in Sydney, which is a big city, and also living in small country towns with a thousand people. I thought Dunedin was a really good balance with a strong cultural life like a big city but not as impersonal as a large metropolis."

He found Dunedin a creative place to start initiatives and find like-minded people willing to give things a go, he said.

"For a city this size there's an amazing variety of people around with different skills and interests that are quite unexpected - such as Yuri Terenyi who will be playing in the concert. Who would have expected a Hungarian bagpipe-maker with amazing expertise in early musical instruments and performing on them, and he's just living out there beyond Port Chalmers. Or the likes of Alan Edwards, who has built his own spinet and is currently building a portative organ."

At the core of the Dunedin Medieval and Renaissance Society is the Rare Byrds Consort, which is gradually expanding and now involves 12 to 15 people, with singers, a group of mixed instruments and separate recorder and viol consorts.

Then there's the Playford Dancers, a small medieval and Renaissance dance group, and a Renaissance rapier group of about 15 which works with replica swords and period fighting styles.

Interest in historical martial arts has always been strong in the East, but there's an explosion of interest in research and re-creation of historical European fighting techniques, he said.

He works with a puppetry group that has performed Dr Faustus and Jonah and the Whale using glove puppets.

He likes to work with other groups with similar interests, such as the Southern Consort of Voices, which is performing in tomorrow's concert, Jack Frost Morris and the French dance group Les Belles Vilaines - both of which include early dances in their repertoire. It enriches everyone concerned, he says.

Cweorth sometimes takes early music and dance into schools and would like to develop the educational aspect of the society.

"Generally people are very sympathetic, but often don't have a high level of knowledge.

You can say the word "medieval' and everyone will have some association but it's not the same with the word `Renaissance'. There are a lot of people who don't really have any mental picture at all."

Rather than specialise in a particular period within the Middle Ages and Renaissance, the group enjoys the richness of the music of the whole period from the 12th to the 17th centuries; they feel it's worth sacrificing a bit of specificity to have the general scope, he said. However, Cweorth would not want to live in those times.

"They were horrible times in many ways, profoundly uncivilised, downright barbaric, but beautiful things came out of that and I think it's a question of drawing what was best from those periods while recognising that some pretty nasty things happened as well. You don't want to gloss over that."

The medieval practice and philosophy of alchemy held that light was hidden in darkness, that gold was hidden in base metal, he said.

"For me there's something of that at work when you look at a historical period like the Renaissance. It's the combination of the dark and the light that makes it so interesting."

Cweorth's interest in early music and culture started when he was a boy and his parents took him and his brother to the annual Christmas concert of the Renaissance Players in Sydney.

"They used to do amazing early-music Christmas concerts with a terrifying clown called Erasmus," he remembers.

Living in Armidale, in northern New South Wales, in the early 1990s, he found a recorder teacher who ran workshops and introduced him to early-music recordings; his interests in the music, literature and culture of the period started to come together, he said.

He changed his name to Cweorth which means sacred or ritual fire in the Northumbrian runic alphabet, he says.

After arriving in Dunedin he finished a BA at the University of Otago, majoring in English with a minor in Latin. It was his third university - he'd kept leaving because although he loved studying he hated university, he said with a laugh.

Now his day job is as a tutor in adult literacy, something he volunteered for soon after he arrived in Dunedin.

"Learning to read was such a revelation to me. I was a very naughty small child and got expelled from a kindergarten for misbehaving but I calmed down once I learned to read.

"For me learning to read was just an enormous gift so I want to pass that on to others.

"People start to read for pleasure who have never done that before. Sometimes it's newspapers and magazines which they've never really opened before but just skimmed through and looked at the pictures. You get people who will read a novel for the first time in their lives and become readers.

" It's a really transformative activity, literacy. It changes lives."

See it, hear it

• "The Triumph of Mars", presented by the Dunedin Medieval and Renaissance Society, is at the Dunedin Public Art Gallery tomorrow at 7.30pm. It will be preceded by a free fire performance in the Octagon from 6.45pm.
The concert, performed by the Rare Byrds Early Music Consort, the Southern Consort of Voices, the Playford Dancers and guests, will feature early music, dance and poetry of war.

• At 6.45pm in the Octagon, the FireBugs and Jack Frost Morris will present fire performances and Flaming Morris dances, accompanied by medieval bagpipes and other instruments.

• On Saturday in the Dunedin Public Art Gallery conference room, the society is hosting a programme of free workshops on the history of the sword, featuring demonstrations of the medieval German longsword, the Renaissance rapier and Japanese fighting styles.