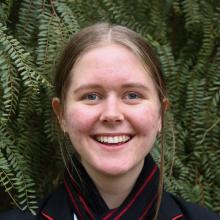 I find myself standing within the depths of a bustling metropolis in place of what was nothing more than an open wasteland.

Any evidence of destruction has been diminished, and a complex concrete jungle has been formed in its place. The dry, hardened dirt has been smothered by layers of hard concrete, forming a barrier to the undergrowth and preventing any life from emerging from below.

I peer down the long stretch of tarseal that lays before me, to see a mass of vehicles inching their way down the cramped streets. I am closely flanked by rows of concrete buildings which have filled the land with dull greys. They are packed together tightly like sardines, and I feel encaged between them as a feeling of claustrophobia creeps in.

Amongst the buildings, modern trees of concrete and steel emerge and creep far up towards the clouds. I find myself once again surrounded, but the towers that soar above me are nothing compared to the wooden giants I once knew, and they occupy the places in the sky that were their rightful homes.

Bulky chimneys protrude out from the masses of buildings, and release thick, murky clouds of smoke into the atmosphere.

The blue sky is left blanketed by a layer of smog, shelter casting itself over me once more and leaving my skin deprived of light. The air is left tinged with grey, making it difficult to differentiate it from the cigarette smoke that weaves its way through the air.

I take a slow breath in, to experience not a single scent of nature. Instead, I find myself inhaling an array of fumes that surround me, and I splutter in the attempt to remove the toxicity from my lungs.

The silence that I remember has been replaced by a constant buzzing of conversation and the impatient tooting and movement of vehicles. I attempt to recall the birdsong that I was once blessed with in my mind, but the creature’s existence in this place is so far gone. Instead, I can only tune my ears into the overwhelming wave of constant, dull sounds of this new land.

A shiver tiptoes down my spine as I feel the coolness of this urban life. I am shoved to the side as swarms of smile-less people rush by, stampeding down the crammed sidewalks in pursuit of their individual adventures.

The beauty of this city is nothing compared to the wonderland I used to see; for new, concrete foundations have been formed upon the land. The wonders of nature have been deserted and are left to be forgotten. It is a world of concrete, with no evidence of what beauty once lay beneath.