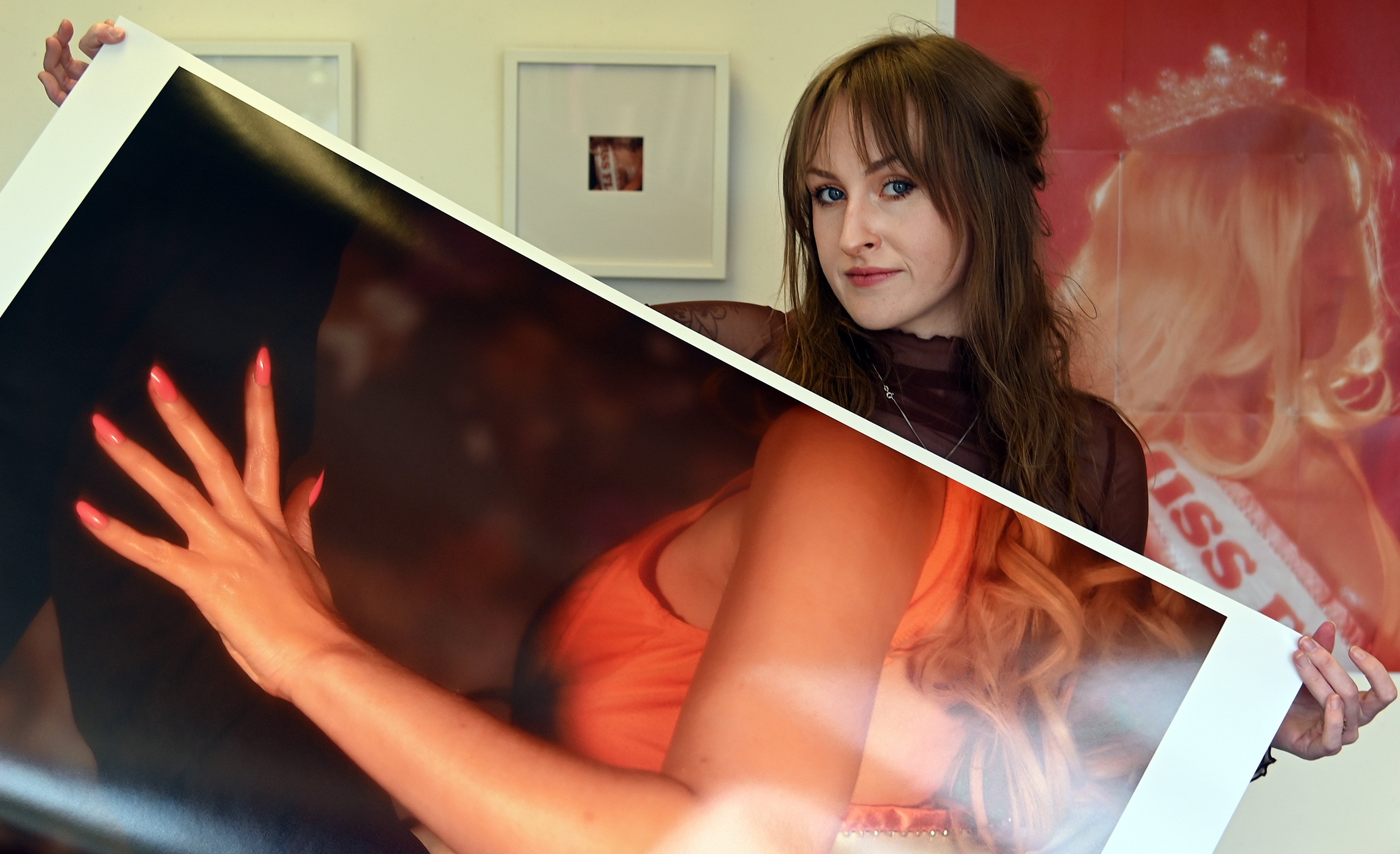 Nerves, excitement, relief are just some of the emotions Dunedin School of Art’s final year students are experiencing as their work goes on display to the public this weekend. Rebecca Fox talks to three artists about their works.

As she finishes covering herself in tan oil-based foundation, Emily Crooks dons an orange swimsuit and blonde wig.

The transformation into a 1970s or ’80s beauty pageant contestant is complete as she swings a sash over her shoulder.

Crooks then poses in front of the camera taking shots of herself in the soft focus of the 1980s film photograph style.

The resulting photographs form part of her final year project to be exhibited in SITE 2021.

It all came about after Crooks found herself fascinated by television coverage of the beauty pageants of the 1970s to 1990s during last summer.

‘‘They were so exciting to me, they were so openly grotesque. They’re literally about watching women and evaluating their bodies.’’

Then she started thinking about how pageantry evolved and morphed over the years.

‘‘I found there was this real link between these women on stage and the people who post on Instagram like influencers or mega-celebrities and how they curate their Instagram to seek approval or put things out for evaluation by an audience.’’

She found the same sort of structure of self-actualised objectification, where people know what they are doing is not ideal but find a benefit to it.

Just as with the pageants of the past, which participants often saw as a way out of small towns and to make money for their family, influencers are also doing what they do to make money.

‘‘There is this parallel between why influencers influence on Instagram and why pageant contestants entered competitions.’’

As she did more research, Crooks discovered the woman behind the United States pageant applicants was Lenora Slaughter, who was president of Miss America from 1938 to 1968 and set the rules contestants had to abide by, such as being single, unmarried and white, which stood until 1958 — but no African American contestants competed until the 1970s.

‘‘She’s responsible for this identity of feminine performance, which is holding everyone who participates in performance to white beauty standards and morals.

‘‘It’s translated still. This perfect ideal is archaic, yet in a way it seems to still happen.’’

Her work was an exploration of how people might take part in something they know is not good because there is a benefit.

‘‘Subjecting yourself to creepiness to get ahead.’’

So Crooks created the self-portraits of herself as a pageant contestant.

‘‘There is an element of performance. The process is so long and frustrating, I’d cover myself in foundation so I had that perfect ’80s tan. I’ve embodied ‘Miss Flesh Lite’, as I’ve called her.’’

She also transformed herself into the image of a prim and proper Slaughter for a black and white photograph.

‘‘They’re performance art. I’ve curated it all. Pageants are heavily curated so I’ve played into that. I’ve mimicked it so I could understand why it’s so important to have things be a certain way, look a certain way.’’

Crooks found to understand her practice she needed to embody them, to become them for a little while.

‘‘But I’m very ready to step out of the orange swimsuit and take the blonde wig off.’’

She was also ‘‘chasing’’ technical perfection in her photographs to create the style of 1980s images using a mix of film, digital and instant photographs.

‘‘All of the big prints are digital, so you are fighting with the digital camera all the time to get that ’80s glow and printed-on lustre, such a mass produced plasticky paper that lends itself to that real softness, glowy aestheticism of ’80s.’’

From Southland originally, Crooks moved to Dunedin to attend St Hilda’s Collegiate School, and has always found herself drawn to art, starting in the textile area.

‘‘The sash I made is like a love letter to my time in textiles.’’

However, after trying photography she soon found it was her true love, and she had not looked back.

Having studied for five years, Crooks is now looking to take some time out and work on her next series — maybe a spaghetti western theme?

Paying tribute to the hard work of her father’s family, Victoria Tong’s pencil drawings hark back to an earlier generation.

As half-Chinese, half-Pakeha, Tong likes to focus on her heritage and the challenges of being biracial in her artwork.

While born and raised in Dunedin, Tong’s father’s family owned a takeaway business in Wellington.

So, for her final year project, Tong has drawn a collection of A4 images which together feature the exterior of the business over colourful drawings of her own favourite Chinese takeaway dishes.

‘‘It’s a homage to the labour of previous generations and to food, I really love to eat.’’

The second part of the works is a large round disc featuring detailed, colourful pencil drawings reflecting Tong’s experiences as a Chinese New Zealander.

‘‘There are the stylised clouds of Chinese design clouds mixed with patterns used in previous artworks referencing the food drawings as well [as] like rice, which is a hybrid of both my Western and Eastern sides.

‘‘It reflects the multifaceted nature of being Chinese and Pakeha — it’s sometimes not an easy thing so it’s representative of me.’’ 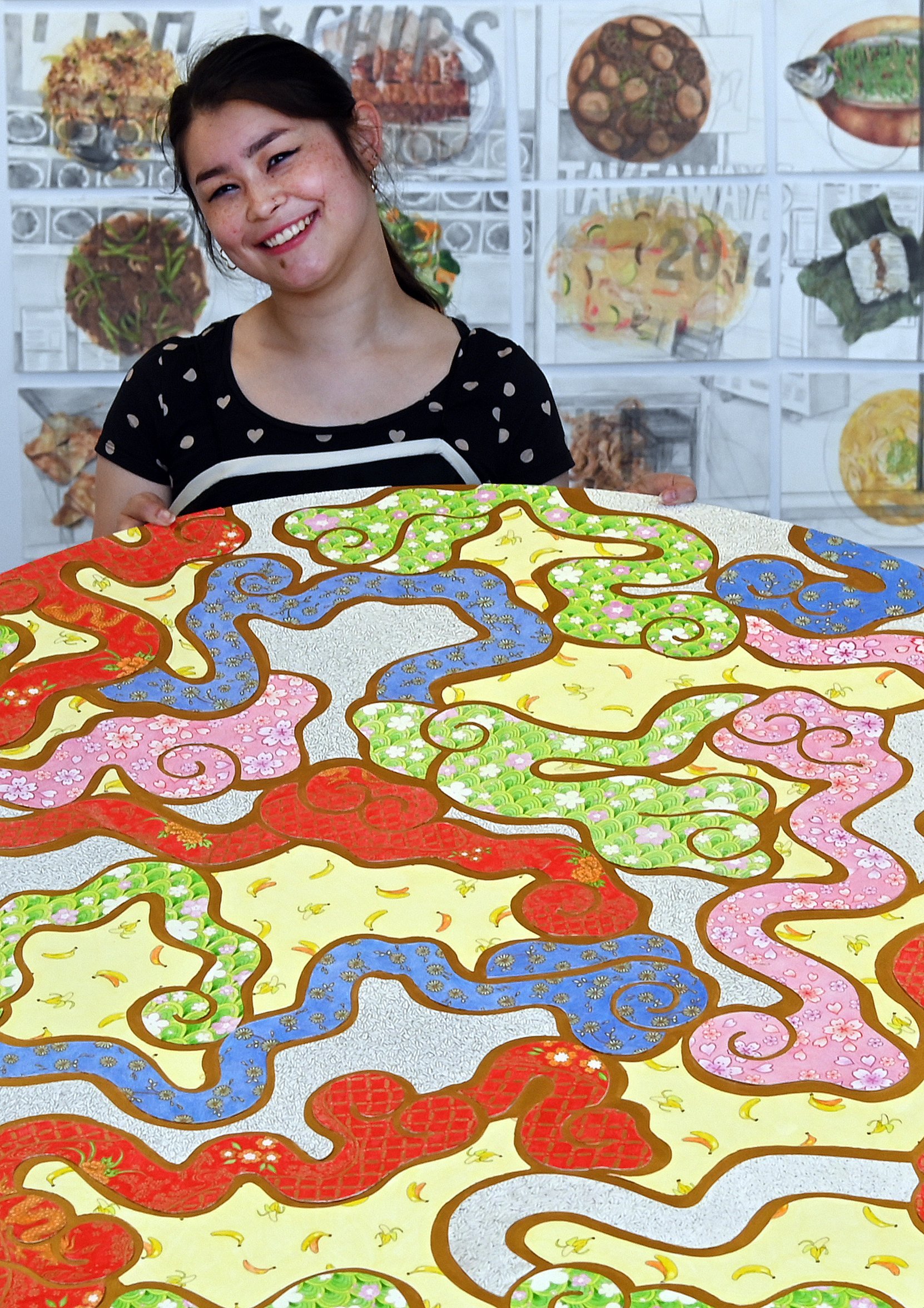 Victoria Tong with some of her SITE 2021 work.

Colour is important to Tong as she likes her works to be inviting and the detailed drawings require a lot of work.

‘‘It’s something I really wanted to put time into to reflect the work my father did and my grandparents and their grandparents.’’

Tong is a fourth-generation New Zealander, but finds even now she can still be seen as an outsider by some who do not realise the long history of Chinese in the country.

‘‘So I’ve always been interested in incorporating it into my work.’’

‘‘I think I’m attracted to drawing as you can take it anywhere. You do not need a whole lot to draw. A lot of art is based in really good drawing to start with.’’

Tong uses a waxy, pigmented polychromos pencil to get the soft colours she likes.

She is planning a break at the end of the year as she had found the past three years at art school ‘‘very intense’’.

‘‘It’s been a long journey to get here with Covid and lockdowns falling so close to assignment due dates and I keep working on things to the end. I’m a bit of a perfectionist.’’

A smooth quartz globe dangles over the light reminding people of the need to ground themselves in the physical rather than the information super-highway.

Jacob Tucker’s jewellery piece for the SITE exhibition looks at the internet as the void in which people’s digital selves interact with the physical selves that created them.

‘‘They’re manifestations of your digital self and the way you put yourself like into the world through the internet.’’

Te Kore, the void, is considered to be something beyond our world of experience. A place of chaos and infinite potential for being.

‘‘They’re touchstones so you can ground yourself in the physical realm. At its essence it is about being alive and not being so distracted by things that are not real, not letting them impact you.’’ 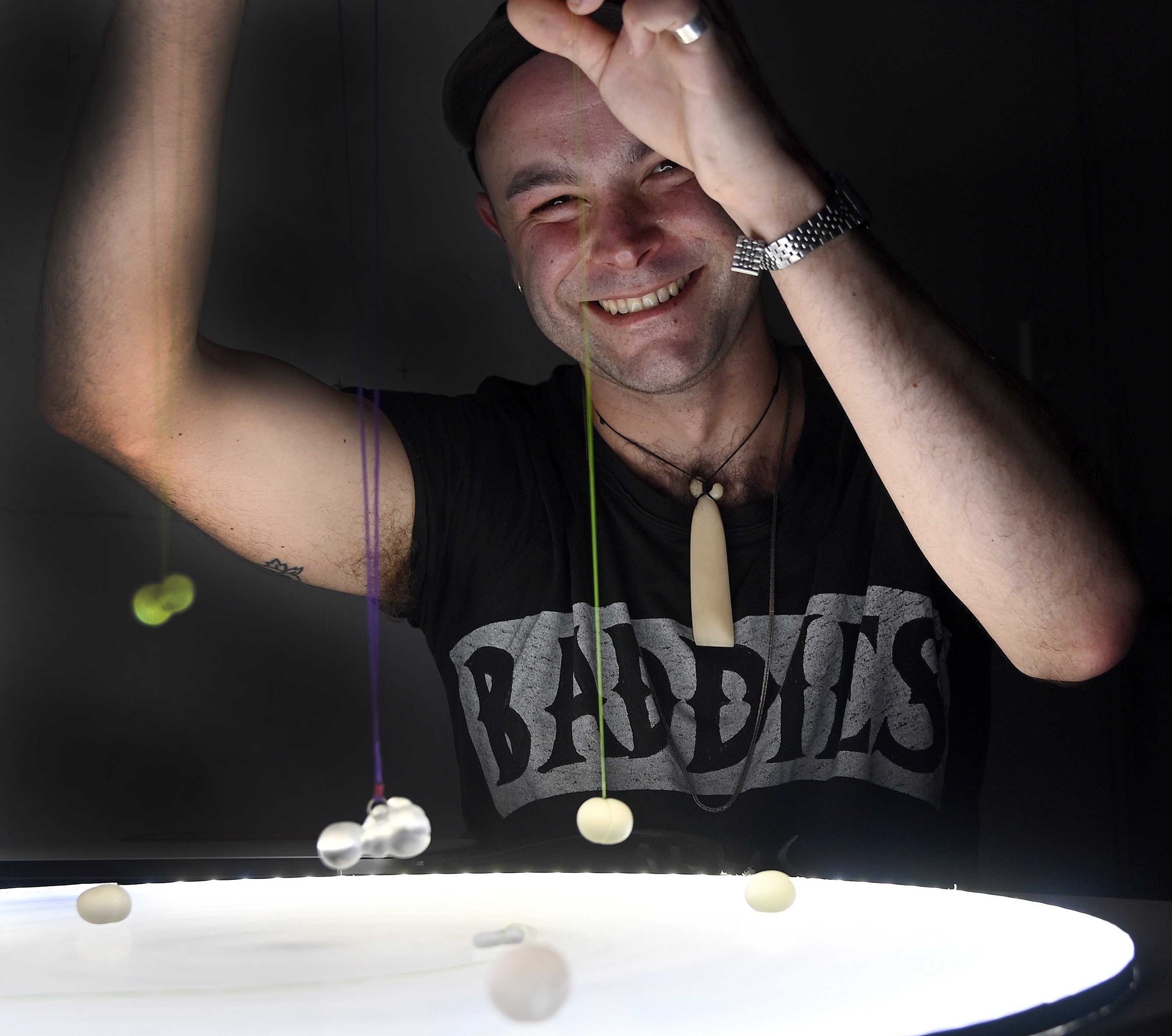 Jacob Tucker displays the jewellery he has on show at SITE 2021.

Tucker came up with the idea during lockdown when so much of everyone’s lives went online.

‘‘Thinking about the toll it takes on you.’’

So he refocused his direction to the digital interplay with the physical being.

By wearing these manifestations of a fragile digital ego, he asks the wearer to consider how they will go ahead into the future, and to consider the value of prioritising grounding themselves in real life and connecting with real people.

From Tauranga, Tucker lived in Wellington for seven years before he began to study jewellery, but when his course closed down he came south to Dunedin to continue his studies.

While always attracted to the idea of making jewellery, it took time for Tucker to follow the interest.

‘‘I took a few gap years before I decided what I wanted to do with my life. I worked in a gas station.’’

He has enjoyed the move to Dunedin, liking the more laid-back vibe of the city.

Next year, he hopes to do something ‘‘fun community art based’’ if he can get funding.