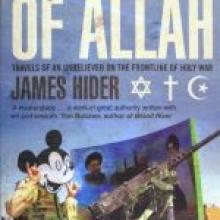 An informed study of the mayhem caused by the American invasion of Iraq.

THE SPIDERS OF ALLAH Travels of an Unbeliever on the Frontline of Holy War
James Hider
Doubleday, pbk, $37.99

This book is one more contribution by one more war correspondent providing an informed study of the mayhem caused by the American invasion of Iraq.

The author, James Hider, the Middle East bureau chief of The Times, is a confessed atheist who records with cynical horror the fanaticism in the Iraqi conflict of disparate tribes of believers, many convinced that paradisiacal berths, in the company of many virgin girls, would be reserved for them in the hereafter because of their savage bellicose deeds on Earth.

Many of Hider's observations make for horrendous reading, and this is a book those of delicate disposition should avoid.

Nor is the barbarity confined to the inhabitants of Iraq.

He tells, for instance, of a group of American soldiers at a checkpoint near Yusufiyah who decided to get drunk and make their way to the house of a pretty local girl they had seen passing their position on several occasions.

"They broke in and shot the girl's parents and 5-year-old sister through the head," Hider writes.

"They then gang-raped the 14-year-old girl before murdering her and setting her body on fire to destroy the evidence.

"A few months later, an Iraqi gang from Yusufiyah took revenge by attacking another US patrol, killing one soldier and kidnapping two others.

The captives were tortured and beheaded, their mutilated bodies left booby-trapped on the roadside to maim whoever came to retrieve them."

Hider tells of beetroot-faced British squaddies in full battle armour, swaying in the heat haze as they stood guard over patrol stations, unable to stay out in the heat for more than 20 minutes at a time.

Outside, Iraqis raged that the clock had been turned back centuries in a few brief months.

As well as writing stylishly about the complicated fabric of Middle East quarrels, this brave author also dips into the past history of a region which is unlikely ever to know lasting peace.