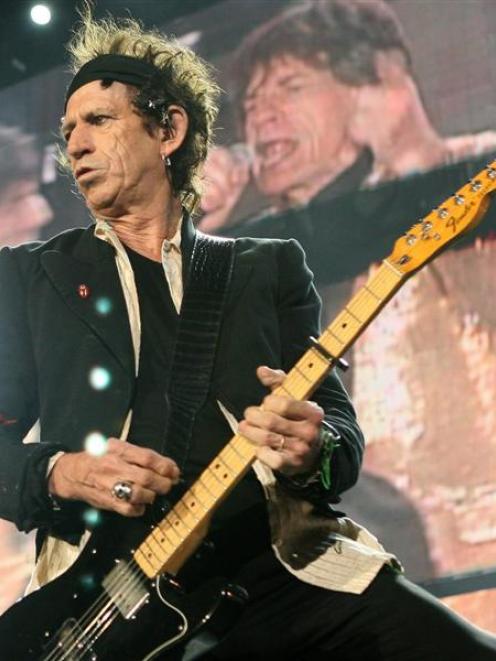 Photo by NZ Herald.
It's a book remarkably short on life stories - or at least the sort we might expect.

Partly, of course, that's a matter of memory.

"The ultimate party," legendry Rolling Stones guitarist Keith Richards writes in his 500-plus-page autobiography Life, "if it's any good, you can't remember it. You get these brief vignettes of what you did."

But even more, it has to do with intention, with what Richards wants to say about his myth.

He is, after all, the very model of the rock star bad boy: drug addict, bluesman, libertine. But he is also, as anyone who has followed his career knows, exceedingly intelligent, a keen and cool-eyed observer of the illusions that drive the rock 'n' roll machine.

"I can't untie the threads of how much I played up to the part that was written for me," he acknowledges.

"I mean the skull ring and the broken tooth and the kohl. Is it half and half? ... Image is like a long shadow. Even when the sun goes down you can see it ... It's impossible not to end up being a parody of what you thought you were."

That's a key point, especially when it comes to the Stones, who have, over the course of nearly half a century, gone from being the most dangerous band in the world to a full-fledged corporate entity: Rolling Stones Inc.

It's been more than 30 years since their last great album (Some Girls) and even longer since they were at their peak - 1972's Exile on Main St, which remains, I think, the single greatest rock 'n' roll record ever made.

Their story, too, has been told many times, perhaps best in Stanley Booth's The True Adventures of the Rolling Stones.

We know the high (or low) points: Altamont, the 1972 US tour, the recording of Exile in Richards' rental house at Nellcote in the south of France.

We know, too, about the excess and the drug busts (1967, with a naked Marianne Faithfull; 1977 in Toronto, the case that almost ended the Stones' career).

Because of that, it's impossible to read Life without experiencing a peculiar kind of double vision, between the stories we have read and what Richards means to tell us - between, in the most essential sense, the myth and the man.

So to steal a line from Street Fighting Man, what can a poor boy do? Richards' solution is to give us a book that reads, in many places, like an extended interview transcript, full of digressions and blind alleys, repetitions and riffs.

He dispenses with the basics fairly quickly: three pages on Altamont, not much more than that on Toronto, barely a page on the death of Brian Jones and the Hyde Park concert in his memory.

"It's difficult to put those middle and late '60s together," Richards writes, "because nobody quite knew what was happening. A different kind of fog descended ..."

Richards writes at greater length about his relationships with Anita Pallenberg and Mick Jagger, both of which were fraught; of the latter, he observes, "I love the man dearly; I'm still his mate. But he makes it very difficult to be his friend."

Even though a quote like that gives the book the whisper of a public airing, it's not really what Richards has in mind.

Instead, we get the sense that he's being candid, saying what he feels because he has no reason to hide.

Nowhere is that more compelling than when Richards writes about music, which he does with insight and grace.

Here we have the brilliant stuff, worth the price of admission.

Early on, he breaks down the intricacies of blues guitarist Jimmy Reed's chording: "It took me years to find out how he actually played the 5 chord, in the key of E ... [Instead] of making the conventional barre chord, the B7th, which requires a little effort with the left hand, he wouldn't bother with the B at all. He'd leave the open A note ringing and just slide a finger up the D string to a 7th. And there's the haunting note, resonating against the open A."

There's more: Richards' discussion of Chuck Berry and T-Bone Walker's double-string playing ("[It] had the possibility of getting this dissonance and this rhythm thing going, which you can't do picking away on one string"); or his notion that "There are some people looking to play guitar. There's other people looking for a sound".

It may seem insular, nerdy even, but Richards resolves it in his explication of five-string open tuning, which became the key to the Stones' sound.

The genesis, he tells us, is pure Jimmy Reed, a way of tuning the guitar so there is always a drone note, so that, "if you're working the right chord, you can hear this other chord going on behind it, which actually you're not playing".

This is why, he claims, so many Stones songs, while apparently so simple, can be so hard to re-create on a conventional guitar.

"To write a song that is remembered and taken to heart," Richards notes, "is a connection, a touching of bases. A thread that runs through all of us. A stab to the heart."

This suggests, for me, the most useful way of thinking about this autobiography.

Forget the war stories, the biographical details; if that's what interests you, you're better off with Stanley Booth's book.

But if it's some connection with the music that you're after, you might want to start right here.