Fascinating political study, but man harder to pin down 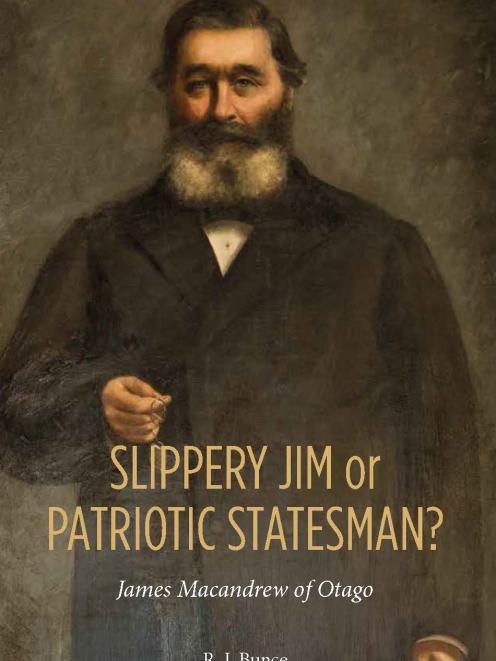 Former Prime Minister Sir John Key earned the nickname "Teflon John'' for the seeming inability of any dirt to stick to him.

But compared to James Macandrew,  Sir John was a rank amateur in the dirt-dodging stakes.

In 1861 the man after whom Macandrew Bay and Macandrew Road were named was imprisoned for defaulting on his debts, amid allegations he had also misused public money.

Despite that, while behind bars he still finished second in the election for Superintendent of Otago.

Once freed, it took just 20 months for Macandrew to regain a seat on the Provincial Council, and two years after that he was elected to Parliament.

To use another modern term, that's bouncebackability.

There is a hell of a story there, and R J Bunce has tried his level best to tell it - with varying levels of success.

Much of the modern city landscape came to be during his political career. The harbour reclamation and the founding of the University of Otago are but two of the many projects in which Macandrew - an inveterate joiner of committees and driver of causes - was instrumental.

On this Bunce is on firm ground, and shows a sure touch as he canvases the sheer breadth of Macandrew's public life.

His 29 years as an MP, including stints as a Cabinet Minister and leader of the Opposition, are also well covered, although some readers may struggle with the minutiae of the arguments over the disestablishment of provincial government in New Zealand, something which Macandrew bitterly opposed.

The private side of Macandrew is more difficult for Bunce to fathom.

As he notes in his introduction, very few of Macandrew's private letters survive, leaving his biographer to guess at his subject's inner thoughts.

Despite being widely and wildly reviled by his many opponents, he kept on winning elections - 17 of the 19 he contested.

He also seldom got favourable press coverage - Bunce recounts a public meeting where Macandrew supporters burnt copies of the Otago Daily Times for its antagonistic coverage of him.

But there was obviously something about this political survivor, who saw his adopted home emerge from the swamp to become New Zealand's second city during his lifetime, which meant the people of Otago and Dunedin kept on voting for him.

In that respect, Macandrew recalls Winston Peters - they certainly shared an interest in regional growth.

Capturing the essence of such a mercurial man was a tough ask, and the secret of Macandrew's personal and electoral appeal in the face of obstacles which would be prohibitive today, remains elusive.

That said, this is still a valuable account of an early booster whose contribution to the development of Dunedin, Otago and New Zealand deserves to remembered.