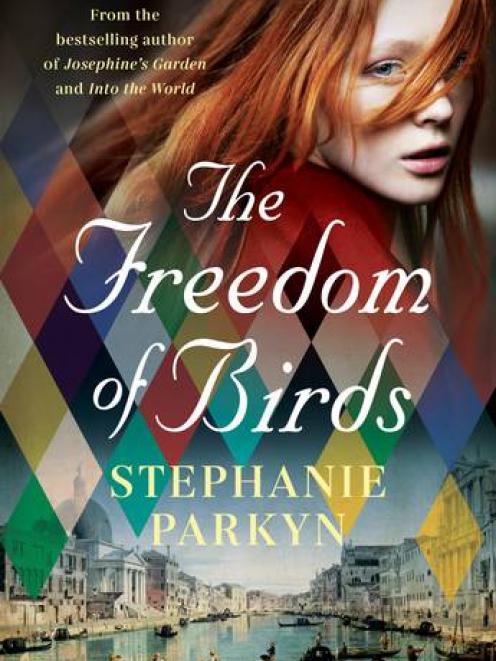 The Freedom of Birds is set in Europe, from the French Revolution until the first defeat of Napoleon in 1814. Two of the three leading characters are French young men, Remi Victoire and Pascal, who spent their childhoods within the company of the Comedie-Italiennne in Paris.

At 16, they were forced into hiding by Remi’s mother, to save them from the conscriptors recruiting men for Napoleon’s army. Eventually they make their escape into the small towns of Prussia, where they hope to make money as street entertainers, skills they had been taught from childhoods spent under the benevolent guidance of Gianni Constantini, actor-manager of a Commedia dellarte company.

In Prussia, the boys join up with a Dutch girl, Saskia, a contortionist, herself escaping from a circus group in St Petersburg, running from the clutches of a mysterious priest, a monster who may be her father. The three of them ply their acting and gymnastic skills to earn money until the Prussian townsfolk turn against them when Napoleon’s Grande Armee, defeated in Russia, makes its painful way back towards Paris through north Germany. The German States turn against the French, after formerly being their allies.

For safety’s sake, the trio make their way to Venice, meeting up once again with Constantini, putting on his plays amongst his own people. The trio fall in love with others they meet in Italy until, once again, they are forced to flee for France during the rise of Italian nationalism in the wake of the French retreat. The end of the novel sees all three in Paris, the city where these adventures began, now parted from their lovers, as the Russians, with their German allies, march in triumph through the streets of the French capital.

This historical frame is threaded through with a series of themes centred on notions of freedom, reflected in the title of the novel. The orphans of Constantini’s company, child assistants and actors, were all illegitimate offspring of women of the theatre, themselves handmaidens of the theatre’s patrons.

Women, Parkyn implies, enjoyed the freedom of life in the theatre, away from the conventions of the bourgeois world, but a freedom they paid for by bearing children. The women were conflicted: did they give up their freedom to care for their children, a care severely limited for unmarried mothers, or did they abandon their children to foundling convents or the streets? The children too sought freedom, from abuse, shame, poverty. The three major characters are tough, fighting for their own freedom, but also yearning to know of their own origins, of their mothers and fathers, their identities in a violent, unstable world.

This is New Zealander Stephanie Parkyn’s third historical novel. It is strongly influenced by the works of Olympe de Gouges, the French playwright and feminist pamphleteer, executed by the Jacobins in 1793 for her radical politics, her fight for women’s rights and her opposition to the dominance of misogynistic policies within the leadership of the French Revolution. These ideas are enunciated strongly through the character of Colombina, an actress in Constantini’s company in Venice, a woman demanding sexual freedom, unfettered by conventions of male dominance and the binding rules of marriage.

Over and above the historical setting and pleas for freedom from convention and cultural prejudices, this a rumbustious adventure, fast moving, colourful, impossibly romantic, but there are no saccharine endings. The romance is countered by vivid images of the cruelty of brutal war, the misery of poverty and traumas of fractured identity.