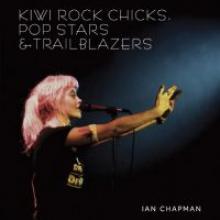 The first thing I did after receiving this book for review was apply the Jenny Morris litmus test.

Morris is my all-time favourite Kiwi rock singer, so for this lavishly illustrated softcover to have any credibility, in my opinion, it had to do justice to the sexy, multitalented former member of the Crocodiles.

After turning to page 142, I was satisfied that it did.

A gorgeous on-stage photo is followed by a rundown of her life and career, in her own words.

The book features 54 of New Zealand's best female rock, pop and crossover singers, all telling their own stories.

Many of the younger singers I had not heard of until now, so reading about them has been an education as well as a pleasure.

Along with an autobiography, a discography is included for each performer.

Author Ian Chapman says the book is a celebration of Kiwi female artists.

''The desire to raise a trumpet and blow a well-deserved and overdue fanfare to these super-talented women is ... the primary motivation ... ''

As a university music lecturer, Chapman also felt that while his students had a good knowledge of female artists of the past 20 years, they knew little about the trailblazing women singers of the 1960s, '70s and '80s, and he wanted to address that imbalance.

All the newer stars, such as Bic Runga, Brooke Fraser, Anika Moa and Dunedin-born Annah Mac are included.

Debbie Harwood says in the foreword: '' ... New Zealand women singers/musicians have enormous public appeal but little respect from the [music] industry, which has been reflected in the books written and documentaries made. The public, however, love them!''

This book is beautifully presented and, as Chapman says, long overdue.

• Geoffrey Barnett is a Dunedin journalist.