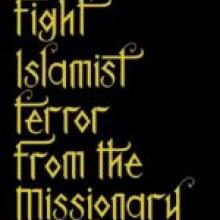 HOW TO FIGHT ISLAMIST TERROR FROM THE MISSIONARY POSITION<br><b>Tabish Khair</b><br><i>Constable and Robinson</i>
With its striking cover, provocative title, controversial content and bitingly satirical tone, this novel is likely to appeal to as many people as it may offend.

The story is a topical blend of fact and fiction. It is set in Aarhus, Denmark's second-largest city, and is based around the 2010 murder attempt on Danish cartoonist Kurt Westergaard, whose cartoons of the prophet Muhammad sparked protest and violence across the Muslim world. The 2011 Norway terror attacks also feature.

Author Tabish Khair lives in Aarhus, and teaches English at the university - as does the novel's unnamed narrator, a young and recently divorced Pakistani Muslim.

His best friend, the beautiful Indian Ravi, is an irreverent, foul-mouthed, fun-loving, philosophical, gossipy Casanova, ostensibly doing a history PhD, but more intent on experiencing everything life in the West has to offer, including bedding as many ''plain'' Danes as he can.

In search of somewhere to live, the pair end up renting rooms in the small apartment which is home to Karim, a reserved man and strict Muslim, who suffers the young men's excessive drinking and Ravi's night-time companions (as long as they are both kept out of sight), as well as Ravi's teasing about religion, politics and sex (although with no small amount of embarrassment).

When Ravi voices the desire to learn about Islam, Karim teaches him and allows him to join the devout circle of worshippers who meet for informal Koranic studies every week in Karim's sitting room.

Throughout the book, the ''terror'' incident is foreshadowed, but as both young men have become involved in new relationships with Danish women, much that is viewed suspiciously in retrospect goes relatively unnoticed by them: Karim's unexplained absences, mysterious phone calls and hushed conversations, and angry outbursts during meetings with group members, who include a previous tenant Ajsa, a young Bosnian woman who has recently converted to Islam to marry Ibrahim, a religious Somali man.

This short book tackles big issues - politics, immigration and religion - in a provocative way entirely in keeping with the original satirical cartoons. It invites the reader to question notions of tolerance, prejudice and assumption, and has a healthy dose of art, literature and contemporary culture thrown in.

But, as the reader discovers, this is fundamentally a novel about love in its various forms: how to find and keep it, how to reconcile the ideal with the reality, its pain with its pleasures, and how, ultimately, it shapes everyone's lives.