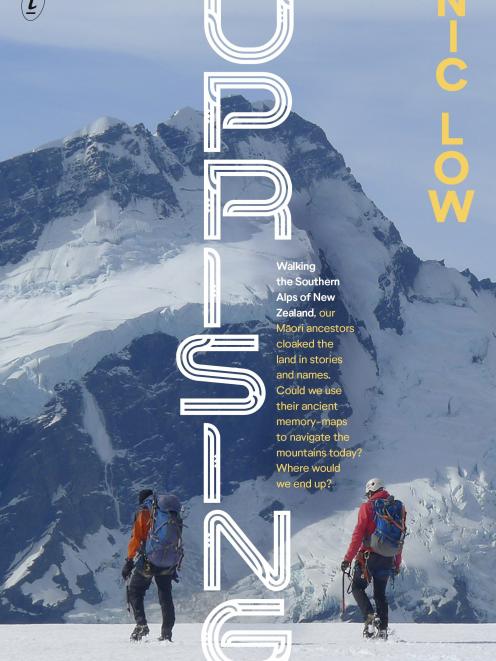 Much has been written with a Pakeha lens on journeys through the Southern Alps from Charlie Douglas in the 19th century (Mr Explorer Douglas) to Geoff Spearpoint in the 21st (The Great Unknown).

While most authors will acknowledge the history of Maori journeys through these landscapes, in Uprising Nic Low has used the travels of his Ngai Tahu forebears as the basis, the essence of his own wanderings.

Low has a solid pedigree of tramping and mountaineering experience on his paternal side, but it was only after the dislocation of a decade abroad that he felt the urge to get back into the New Zealand mountains with a different perspective.

He began by talking to iwi leaders and historians, before setting off to retrace the historic footsteps. The first trip was over Noti Raureka, known to Pakeha as Browning Pass, between the Arahura and Wilberforce Rivers. Raureka was a woman from the West Coast who crossed the pass and linked up with Ngai Tahu in South Canterbury. Her pounamu items caught the attention of her hosts and ultimately led to conquest, intermarriage and trade. Ownership of all pounamu resources became a key part of Ngai Tahu’s Treaty of Waitangi claim.

Low’s preparatory research enabled him to try to view the route through Raureka’s eyes. Food resources like kakahi (freshwater mussels) might go unnoticed to today’s freeze-dried laden tramper, but caught the author’s eye as he contemplated the perilous journey of 300 years ago. And he wondered about how apparent the now well-trodden route would be to someone trying to force a path over the mountains for the first time.

In all, nine different journeys are described. A couple, Tarahaka/Arthurs Pass and Tioripatea/Haast Pass, are road walks now. Others are more challenging. Glacial erosion means that few people now cross Noti Hinetamatea/Copland Pass, once a popular route between Aoraki/Mt Cook and the West Coast for guided tourists. An attempt to reach Sealy Pass, north of Takapo (Lake Tekapo), in winter was nearly disastrous. Travelling alone and with a moving target of objectives — just the next hill or round the next corner — Low went just a little too far and was caught in a slab avalanche. He was largely unharmed but the loss of crucial equipment such as his ice axe led him to call for a rescue.

Perhaps the most interesting hikoi is the last and longest. Starting from Anita Bay, a greenstone source at the mouth of Piopiotahi/Milford Sound, Low and a range of companions travelled by kayak, foot and waka ama over the Milford Track, Lakes Te Anau and Manapouri, Mt Titiroa and the Hump Ridge to Colac Bay. Here, they and their cargo of precious pounamu were welcomed on to the author’s ancestral marae. It seems a fitting place to end the book.

Woven throughout is oral history of Ngai Tahu’s use of the mountainous regions, as well as an account of the land purchases and confiscations of the 19th century and the century-long battle for redress.

Another thread that develops as the book goes on is the author’s burgeoning relationship with a fellow writer he was introduced to days before he started on the Noti Raureka trip. She joined him for the first day of that journey, and as the book goes on, a romance hesitantly develops. They are now partners and parents of a son. As described here, it might seem to be an incongruous and unnecessary adjunct to the main tale, but perhaps because of Low’s skill as a writer, it works.

This really is an outstanding book, and one that anyone who likes to wander through the South Island back-country, or who has an interest in the history of that area, needs to read. For many, it will enable the hills to be viewed with a new lens.

David Barnes lives in Lower Hutt and is an avid tramper and armchair mountaineer.