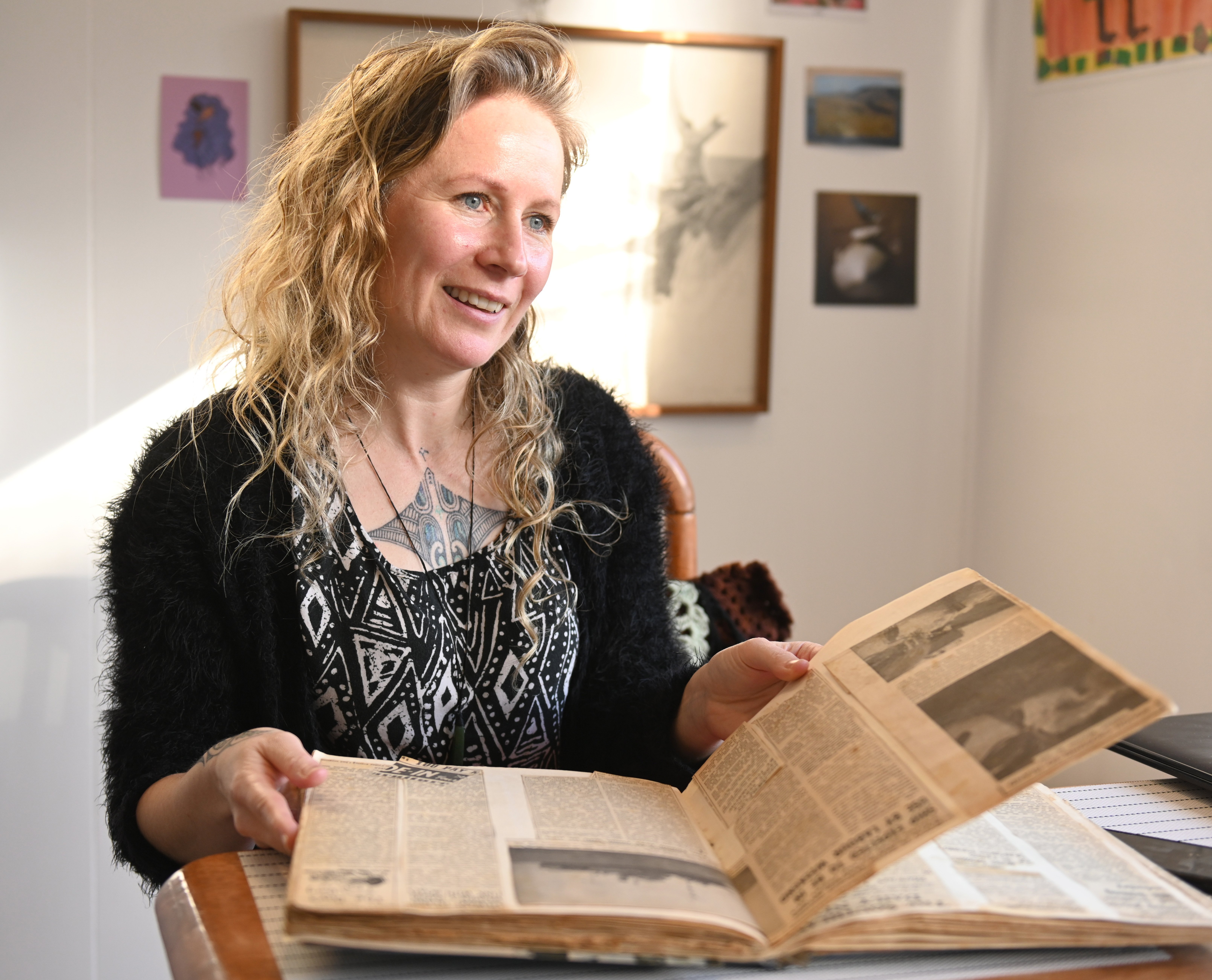 Sitting at a wooden kitchen table with a photograph of her great-grandparents looking on, Becky Manawatu works quietly on her laptop.

The sun is streaming in to the kitchen-come-living area in her small Dunedin ‘‘student’’ flat as condensation collects on the lower windows.

With a cup of tea always at her side, Manawatu (Ngai Tahu, Ngati Mamoe a Waitaha, Pakeha) makes the most of school hours to write, research or gaze out of the window towards the Botanic Garden where she often takes a walk.

‘‘I live near the garden and the uni so I have got this lovely, easy routine I’ve become very attached to now. I’m ruined for real life.’’

Manawatu is in Dunedin as the Robert Burns Fellow for 2021. It is providing her with an income to allow her to write full-time for the first time and exposure to academia with an office on the University of Otago campus.

‘‘I think I fully understand the Robbie Burns syndrome, where fellows end up moving here; they have fallen so much in love with the place they stay. It’s such a special fellowship.’’

She is enjoying it so much she even considered applying for another year before deciding it ‘‘seemed greedy’’. 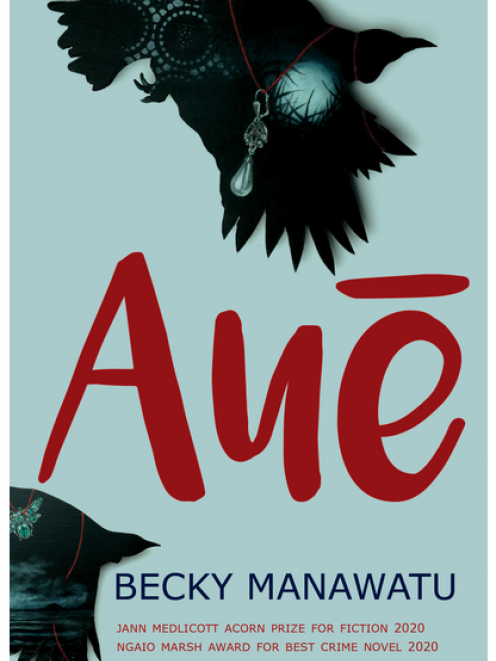 It is an opportunity which came her way after an unprecedented year for the debut author. Her novel Aue won best first book (fiction) and the Jann Medlicott Acorn Prize for Fiction at the 2020 Ockham New Zealand Book Awards, and the best crime novel award at the 2020 Ngaio Marsh Awards.

While Manawatu is grateful for the opportunities Aue, a novel six years in the making, has provided her, she has moved on.

She is 98,000 words into a new novel, a sequel to Aue based on the life of one of its characters, Auntie Kat, and only picks up Aue if she has to for continuity reasons.

‘‘I don’t like reading from it anymore so to have to pick it up and actually read from it, I have to force myself to do it.

‘‘I feel like so much was tied up in the book. I was obsessed with it. To move on from that is easier if I don’t think about it, talk about it or read it but I have to occasionally.’’

The opportunities Aue has provided have been numerous, not the least the people she has met and the communities she has formed and projects she has been involved with since.

‘‘I’m grateful for what I’ve gained from it. It’s opened up a lot of doors, that’s been the really beautiful part of it.’’

She even got to go to the Ockhams this year - last year’s ceremony was cancelled because of Covid-19 - and enjoyed the event much more as last year’s winner than she would have done if it had gone ahead last year.

‘‘To be honest, I really was happy. It was nice to go there and have it be about other people. I’m not an introvert really, but the attention can be embarrassing. New Zealand has such a vibrant literary scene, it was great to see all the superstars.’’

It is a scene she has always been interested in as a writer and a journalist - Manawatu helped pay the bills with a job reporting at the Westport News.

She fell into the job after returning to the West Coast after living overseas for years following her husband Tim’s rugby career.

‘‘There were two jobs on Trade Me: one was working at the News, one was up at Stockton, so I applied for the news job. Lee Scanlon gave it to me as they had trained people on the job before.’’

It was a different experience for Manawatu, whose jobs prior had been teaching English as a second language, working in a seafood factory, selling Lotto tickets and cooking on her dad’s boat.

That is another reason she is enjoying life in Dunedin. She never went to university or experienced student life having left school to work in the factory.

‘‘I feel like I’ve infiltrated the student area. It’s been good fun. I only get a glimpse of it when I go into the office but I love it. I want my kids to go.’’

Her children are also getting a taste of the life with her. They have settled into schools in Dunedin. The three of them squeeze into the small two-bedroom flat - Manawatu shares a set of bunk beds with her daughter. Dad is at home working in Westport but visits regularly.

‘‘We feel at home. He’s in love with Dunedin too. It’s like this cool camping lifestyle.’’

It has allowed her to settle in to writing, looked over by her great-grandparents Elizabeth Te Au and John Wixon.

‘‘It’s one of the only really good photograph I have of my ancestors. I love that picture so much. When I’m writing I usually like to glance over at them hoping they’ll think I’m doing something cool.’’

On the window ledge behind her in a small pottery vase sits her koro’s (grandfather) ink pen given to her by her taua (grandmother) just before she died, only a few days before the Ockhams were announced.

‘‘I hardly write with a pen. But it’s sentimental and it has my taua’s initials engraved on it.’’

The size of the flat meant they could not bring much with them other than board games and books, but Manawatu did bring her family photograph album and scrapbooks.

‘‘I love to look through the old photos.’’

Looking through the albums often gives her inspiration for the personal essays she writes.

Writing those essays is less attractive now that she is more well-known, she says.

‘‘I feel differently about it now. I was quite willing to do it. Since I’ve had a bit more attention it’s made me more aware of how many people can read these things. I know that sounds very naive but I was a nobody just writing and I didn’t think many people would read what I had to write.

‘‘I’ve not written many lately. I’m not here for that. I’m concentrating on my creative writing or if I had the opportunity to help someone else to tell their story I’d be interested in that.’’

Not working also means she has more time for family. When the children arrive home from school and the ‘‘quiet goes out of the space’’, the writing is put away.

‘‘The most I’ll do is read over what I’ve written that day but I don’t touch it. Before, there was no time definitely for family and definitely for writing.’’

Auntie Kat, who is not based on any one person in real life, is at the centre of the new novel chosen because she did not have much of a voice in Aue as she was struggling with an abusive partner.

‘‘At the end of Aue she was the one left in the most undignified way. The point of the story was that the oxygen got sucked out of the room when she was around this particularly nasty character. So she is getting a stronger voice in this book.’’

Manawatu is still working out the storyline, even having written 98,000 words, as much will go as the novel develops.

She feels her writing has ‘‘changed a bit’’, mostly through her having learnt things in writing Aue.

Manawatu has worked hard to get to this point where her writing is her main focus and she hopes to make that continue after the fellowship ends.

‘‘I want to find a way to continue that. That is the challenge, because writing is everything at the moment, it is when I’m not doing well with writing. This is what I’m here for.’’

She did doubt for a few weeks that she was writing good work.

Another distraction is looking at her nana’s scrapbook of her time living on Stewart Island. Her nana cut clippings out of the local newspaper on all sorts of topics.

‘‘There’s a story about a haunted house, crazy stuff. It documents mundane little things probably not deemed newsworthy today but was in the daily papers then.

‘‘There are bits and bobs in there that makes me think that’ll make a good story.’’