FILM REVIEW: 'Rise of the Planet of the Apes' 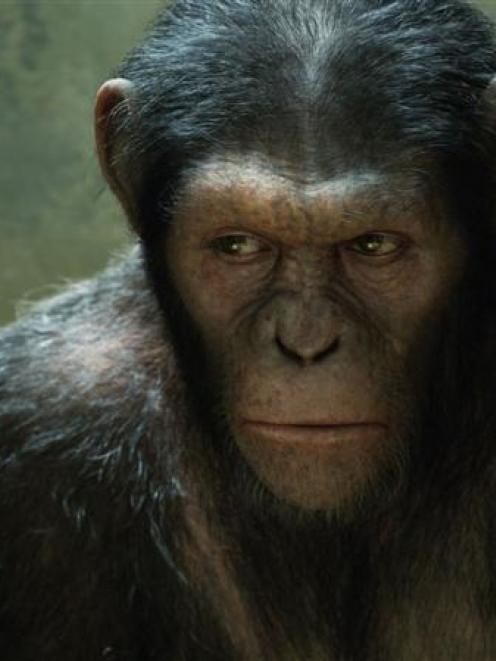 > Rise Of The Planet Of The Apes
Rating: M (violence)
Running time: 1 hour 45 minutesSmart, fun and thoroughly enjoyable, it's a diversion that entertains without insulting your intelligence.

Adroitly blending the most modern technology with age-old story elements, it's also an origin story that answers the question that's been hanging in the air since 1968: How did it happen that apes rule?

That year's Planet of the Apes (based on a novel by Pierre Boulle) posited a world where simians were in charge and people were in cages.

The film was popular enough to spawn four sequels as well as a Tim Burton-directed remake, but this latest venture, which reveals how it all began to go bad for us and good for them, takes things to a whole other level.

Rise of the Planet of the Apes is as good as it is partly because it's strong in the areas all films, not just blockbusters, should be.

It's effectively written by the team of Rick Jaffa and Amanda Silver and well acted both by stars such as James Franco and John Lithgow and supporting players such as Brian Cox.

It's not Caesar, future godfather of all apedom, who we meet first, but his mother, Bright Eyes. She is captured in a teeming jungle and brought back to San Francisco to be part of an experiment being run by a determined scientist (Franco) employed by pharmaceutical corporation Gen-Sys.

That would be Will Rodman, who has been working for more than five years on a drug that would enable brain cells to repair themselves and thus be a cure for Alzheimer's.

When his latest serum, ALZ 112, makes a startling improvement in Bright Eyes' cognitive skills, Will can barely contain his excitement.

But before crucial human testing can begin, the project is shelved, which is especially hard on Will because his father (Lithgow) is suffering from dementia.

Circumstances conspire to ensure that Will spirits Bright Eyes' son, Caesar, out of the lab and raises him at home.

He also can't resist getting his hands on enough ALZ-112 to begin injecting the chimp as well as his father. The results are remarkable at first but, unlike the people on screen (which include Frieda Pinto's comely vet and Cox's ape abuser), we in the audience know that persistent Will is playing with fire.

British director Rupert Wyatt's previous feature was prison-break drama The Escapist, but it proved to be a shrewd choice to make a film about an entire species breaking free of aeons of restraint, one that includes some of the most potent species v species conflict since Alfred Hitchcock's The Birds.

A director who knows how to bring drive and momentum to material he connects with, Wyatt works with editors Conrad Buff and Mark Goldblatt to create a crackerjack sense of pace. And cinematographer Andrew Lesnie, who shot the The Lord of the Rings films, gives Rise of the Planet of the Apes an exciting wide-screen feeling while providing numerous bravura visual moments.

Lesnie's task was complicated by the film's extensive use of state-of-the-art computer technology, an exceptional combination of motion capture and performance capture (for facial expressions) that makes the 150 or so digitally created apes look remarkably real.

Visual effects supervisors Joe Letteri and Dan Lemmon used technology pioneered by Avatar and took it further. This is the first time, we're told, that performance capture has been employed in the direct sunlight of the real world rather than the confines of a sound stage.

All this technology wouldn't be as dazzling as it is without the work of the actors, especially the redoubtable Andy Serkis as Caesar.

For all its visual razzmatazz, Rise of the Planet of the Apes can be subtle as well, including a tiny visual reference to the 1968 film that will go unnoticed by those who haven't seen the original.

Subtlety is also the watchword when it comes to the apes' facial expressions. Caesar's expressions are the key to following this very special chimpanzee's complex and conflicted mental states.