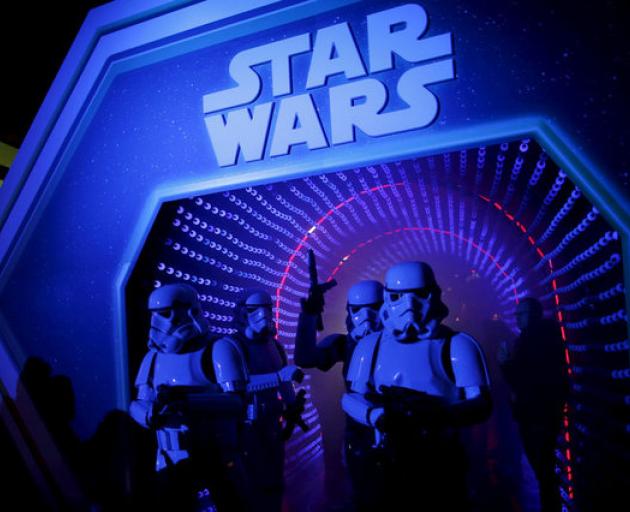 Johnson said the movie, scheduled for release in December, is still in post production.

Kelly Marie Tran plays Rose, a maintenance worker in the Resistance. Johnson said her character embodies the notion that even the most unlikely person can step up and become a hero. He said her part is the biggest new role in the film.

Lucasfilm also live-streamed to fans worldwide the first movie trailer that features Rey, played by Daisy Ridley, wielding a light saber under the guidance of Luke Skywalker who tells her that it’s time for the Jedi to end.

Ridley was brought into the franchise in the seventh movie, The Force Awakens, as a lead character. Fans have been expecting Lucasfilm to add more females to the cast.

The movie poster shows Rey on an intense red background pointing her light saber skyward, the beam dividing images of Skywalker and Kylo Ren. The poster harkens back to the poster for the first Star Wars film in 1977 in which Skywalker similarly pointed the beam up.

The movie stars were on hand during the 2017 Star Wars Celebration at the Orange County Convention Center.

The popular 40-year-old Star Wars franchise in recent times has been criticized for a lack of recognizably female characters. Carrie Fisher was beloved for her role as Princess Leia, a character who was part of the original cast. Fisher died in December, but filmed scenes in The Last Jedi before her death.

The movie franchise is popular equally with male and female fans. Disney bought the franchise from creator George Lucas in 2012 for $4 billion. Three years later, the company announced plans for new 14-acre Star Wars “lands” at both its Orlando and Anaheim, California, parks, capitalizing on the lucrative brand much as Universal Studios did at its Orlando parks with the Harry Potter phenomenon.

The Star Wars attraction will dwarf Disney’s other themed lands and feature two new rides, including one in which guests can captain the Millennium Falcon spaceship.