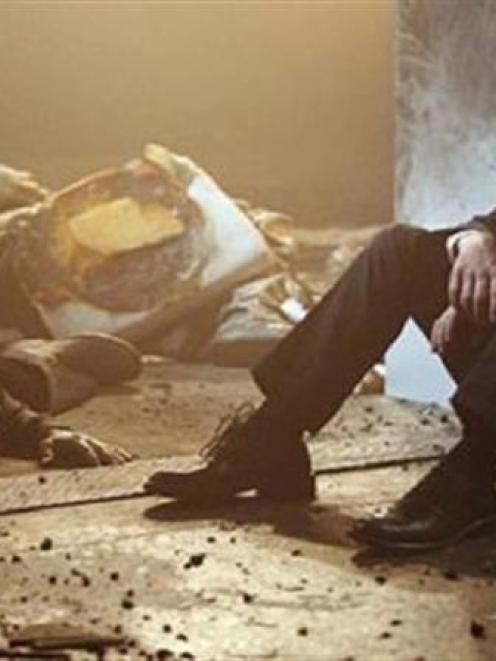 A stunned Jack Bauer (Kiefer Sutherland) sits beside the body of Bill Buchanan (James Morrison) after the latter was killed as a result of a terrorist attack on the White House in last week's episode of 24. Photo from Fox Television.
As far as deaths on 24 go, the one on Thursday night was fairly quick and painless.

At least it was for actor James Morrison, who played Jack Bauer's cool-headed boss Bill Buchanan for the past four years.

But longtime fans of the action drama, starring Kiefer Sutherland, still might have been a little shell-shocked.

Buchanan goes out on his own terms - he blows himself up alongside a group of terrorists who have overtaken the White House.

The character's death ends an unexpected run for the actor, who was supposed to be a one-appearance guest star but became the ongoing source of pushback for Jack.

"The moment you step aboard 24 you're taught to expect that you're going to bite it," Morrison (54) said.

"In this solar system you have one sun. The rest of us are just planets that are invited to orbit, and sometimes we're just yanked out of the sky."

There have been worse ways for good guys on the show to die: Lynn McGill died foaming at the mouth after inhaling nerve gas - ditto for agent Edgar Stiles.

Meanwhile, Michelle Dessler was rubbed out by a car bomb, and Counter Terrorist Unit director Ryan Chappelle was unceremoniously executed by Jack himself.

This season, 24 has spent much time confronting its own controversial theme: Jack's use of torture to extract information from terrorists.

The season launched with CTU disbanded and Jack standing trial for his illegal methods.

Buchanan had gone underground, working with computer whiz Chloe (Mary Lynn Rajskub) to uncover a mole in the FBI.

In an earlier episode, Buchanan clashed with Bauer over torturing a compromised government official.

Buchanan refused to do it.

"It was nice that Bill [Buchanan] didn't have to become someone else," said Morrison.

Since he's been assured Bill's staying dead (one-time dead agent Tony Almeida was resurrected this season), Morrison plans to record some of his own music and finish work on Showing Up, a documentary he's producing with his wife.

"I can only reveal that I play someone who comes in to shake things up at the clinic," he said.

"It was so great to do something where . . . safety of the world is not at stake."